Queer Archive as a journey of transformation, connection and visibility
21439
post-template-default,single,single-post,postid-21439,single-format-standard,theme-bridge,bridge-core-3.0.1,woocommerce-no-js,qodef-qi--no-touch,qi-addons-for-elementor-1.5.3,qode-page-transition-enabled,ajax_fade,page_not_loaded,,qode-title-hidden,columns-4,qode-child-theme-ver-1.0.0,qode-theme-ver-28.6,qode-theme-bridge,qode_header_in_grid,qode-wpml-enabled,wpb-js-composer js-comp-ver-6.9.0,vc_responsive,elementor-default,elementor-kit-41156 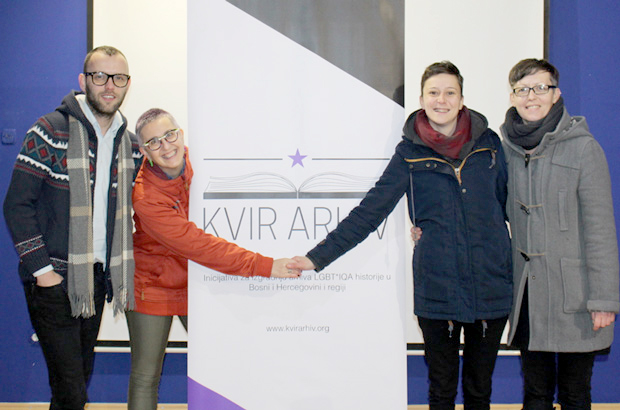 13 May 2019 Queer Archive as a journey of transformation, connection and visibility

“There is no greater agony than bearing an untold story inside you.” Maya Angelou

“When we dare to speak in a liberatory voice, we threaten even those who may initially claim to want our words. In the act of overcoming our fear of speech, of being seen as threatening, in the process of learning to speak as subjects, we participate in the global struggle to end domination. When we end our silence, when we speak in a liberated voice, our words connect us with anyone, anywhere who lives in silence.” bell hooks

Since late 2011, I have been part of LGBTIQA Association Okvir, dedicated to promoting and protecting LGBTIQA human rights, identities and culture in Bosnia and Herzegovina. It was not long until I realized that social change is closely connected to one’s own growth and transformation. I also learned that one cannot deny or split fragments of one’s identity and background no matter how much that history has been manipulated and used as a means of mobilization during a war. I had to unlearn myself from the beginning.

I have also come to accept this country, Bosnia and Herzegovina, and the Balkans region as a geopolitical knot of both life and death within the span of world wars as well as the recent one of the 1990s. Transgenerational trauma as well as the trauma of the past war have left a deep cut in the social and emotional tissue, resembling a cleft or a rupture. This is a story of political navigation through and beyond that rupture.

The dominant narratives of war are dense, thick; the imagery is nationalist, white, gender binary, manipulative – mirroring the hunger for power of those who, unscrupulously, have profited in terms of monetary, symbolic, territorial and social capital. Historical accounts are being gendered, ethnicized, univocal, built on the baseline of Us vs. Them, charged with tradition, myth and religion.

Bodies, like the stories and personal accounts of loss, trauma and grief, are commodified on the national and global market of trauma, used, mended and re-used, re-victimized and re-exploited as political points for crisis regeneration in order to support capital and wealth accumulation through division and tri-partite nation-building.

Re-representing history
Beginning with the war of the 1990s, the ethnonational leaders have heavily invested in the marginalization of human life in Bosnia and Herzegovina. Faith has been taken away. In its place, symbols of religions were erected, politicized and used as means of mobilization against one another. Communities have been shattered, while words like “co-existence” have replaced them. The consequences are heavy, the wounds deep and community resources scarce. International funds were high and presence of international bodies strong. Bosnia and Herzegovina resembles a political laboratory where a unified political will, strategy and action on the course of healing, education and economic reparation are intentionally lacking – up to now.

From the experience of our work in Okvir, a closet can hold many things. It can hold silence, a negation, a mask, as well as a normalization of the unspoken: be it sexuality, be it loss, be it desire, be it any account of human experience or identity that was airbrushed from the normative representations of collective history. The closet, or the margin, holds heavy complexity and messy human stories of life. Some come out as gays, but don’t come out as religious. Some come out as victims, but never as perpetrators. Some come out as one, but not as the other; yet, both existing at the same time. Some are in between, yet some belong to more than one space, more than one temporality and community. Through speaking we centre ourselves as subjects and we hold our story as agents.

Just as the body holds these experiences, so does the archive hold stories. As valentina pellizzer, a special friend and adviser on Queer Archive has said, “With bodies we come out and organize demonstrations, with stories in archives we click ‘Enter’. In both ways, we are visible and we aim at transformation.” Starting Queer Archive was as much a political as it was a personal quest. We had to locate our stories that exist at the same time and do not negate each other. We had to build a space that can hold questions and non-linear answers that collide with each other and by collusion transform each other.

With Queer Archive, we were on a mission to understand war, survival, resistance and transformation through storytelling of anti-militarist, feminist and lesbian, gay, bisexual and trans activists. We had to dig deep and reflect way back, so as to be able to locate ourselves today by finding our roots.

We started Queer Archive in 2017 with the support of WACC and Global Fund for Women as an initiative which records, documents, collects and makes visible personal stories, her/histories and actions of LGBT*IQA persons in BiH – with a particular focus on the 1990s war in BiH. Throughout 2017, we documented and recorded a collection of more than 40 hours of oral histories (audio and video interviews and a documentary on gender, sexuality, war and security) in which more than 50 LGBT*IQA, feminist and anti-war activists have contributed through their personal archives, stories, documents, letters, photographs and memories.

Initially, we planned to record five interviews over a nine-month project. We were supposed to start from the war as the intersecting point. However, Queer Archive turned out to be the most challenging journey in which each perspective we discovered was followed by a multitude of angles and another set of questions. There were places to be discovered beyond our wounds, beyond the rupture. There was and there is a plurality of voices, a mended continuity in solidarity and resistance. Queer Archive, and especially the documentary movie we made, was the receptacle.

We travelled throughout the region and recorded 16 video interviews about activist engagement of LGBT*IQA persons from BiH and the region, out of which 12 interviews were made part of the documentary movie “Red Embroidery”. 400 GB of material were recorded and collected. The movie documents testimonials of LGBTIQA, feminist and anti-militarist pioneers who were active in the Socialist Federative Republic of Yugoslavia from the 1970s onward. These lesbian, gay, trans, queer, feminist and anti-militarist activists worked with women victims of war. Some of them from Serbia and Croatia worked with refugees and deserters and were detained and imprisoned themselves; while some of them were pioneers in lesbian feminist movement parallel to their anti-militarist work.

Some from Bosnia remembered lesbian activists from Germany who came to Bosnia during the war to work with women survivors of violence and rape. Some of them asked whether anti-militarism and pacifism are valid options at all during the war. Some of them did maerches and festivals banned during the 2000s or under socialist Yugoslavia. These persons and their work brought about debates, political divisions and connections within all three terrains. All of them struggled with some parts of their identities while belonging to multiple ideological and geopolitical spaces. All of them testify to empathy, pain, desire, solidarity, resistance and connection.

Personal testimonies
Another segment of the Archive consist of 10 audio interviews/personal stories of LGBT*IQA persons from BiH. These stories portray LGBT*IQA relationships, connection, mutual solidarity, friendship and love formed during war-time beyond nations and beyond borders. Each personal story is in audio format, transcribed and translated from BCS to English language, and accompanied by a personal photograph the storytellers chose themselves.

In parallel with this work we got connected with Whose Knowledge? and we have generated a timeline of LGBTIQA history of 40 years where we made entries on the most important dates and events. We also wrote articles on Wikipedia, making entries on LGBTIQA activists and artists from the region. This was already a third area of knowledge-building where all of the articles published survived the English Wikipedia, while in Bosnian Wikipedia they have been deleted by administrators arguing that there is no space on Wikipedia for Serbian, Croatian and Bosnian lesbian, gay and queer feminists, artists and anti-militarists.

However, writing the articles for Wikipedia resembled building a fortress – including research and collecting more than 200 notable references, including The Guardian, New York Times and references of our own from within the community. In the case of Bosnian Wikipedia, it turned out that references are not as important as the profile and political affiliations of knowledge gate keepers and administrators who actually hold the power. The struggle goes on.

Speaking has been proven to be “the talking cure” because as one speaks, one summons that which has been repressed, reshaped, disconnected. It is through speaking that one re-connects the fragments of self and makes a story that feels to be one’s own, though painful and hard it may be. The stories and testimonials of violence, madness, war, exploitation and abuse are also on the spectrum of human behaviour and existence – just like the stories of desire, joy, friendships and community building.

As Okvir, we have taken upon ourselves the task to locate these stories and re-invent, imagine and build a frame that can hold both stories of human survival, desire and resilience, as well as stories of human atrocities and destruction in times of madness such as war. Words, images, art, stories of our own, in any form, are the connective tissue that have a transformative potential and in our own hands and in our own way we offer hope of healing, as a gift to oneself, as a gift to one another.

Photo above: “We started Queer Archive in 2017 with the support of WACC and Global Fund for Women as an initiative which records, documents, collects and makes visible personal stories, her/histories and actions of LGBT*IQA persons in BiH – with a particular focus on the 1990s war in BiH” —Az Causevic