Remembering all who suffer in conflict and war
21160
post-template-default,single,single-post,postid-21160,single-format-standard,theme-bridge,bridge-core-3.0.1,woocommerce-no-js,qodef-qi--no-touch,qi-addons-for-elementor-1.5.6,qode-page-transition-enabled,ajax_fade,page_not_loaded,,qode-title-hidden,columns-4,qode-child-theme-ver-1.0.0,qode-theme-ver-29.2,qode-theme-bridge,qode_header_in_grid,qode-wpml-enabled,wpb-js-composer js-comp-ver-6.10.0,vc_responsive,elementor-default,elementor-kit-41156

09 Nov 2017 Remembering all who suffer in conflict and war 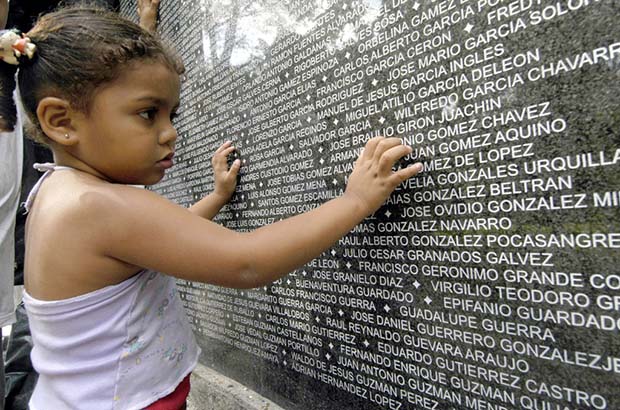 Remembrance Day has been observed by the Commonwealth of Nations since the end of the First World War in honour of members of the armed forces who died in the line of duty.

Remembrance Day – also known as Poppy Day – takes place on November 11, when ceremonies are held in many of the world’s towns and cities.

Elsewhere, people remember those who lost their lives because of civil war, armed conflict, and “disappearances”. Thousands of relatives of victims still struggle for official recognition of what happened and, in some cases, for reparation.

A few years ago, under its programme on communication for peace, WACC supported a project in El Salvador called “Restoring dignity to the victims”.

It produced seven video documentaries about massacres that took place during El Salvador’s terrible civil war in the 1980-90s.

Each video lasted seven to eight minutes and included interviews with survivors of the massacres or with members of the victims’ families.

By showing the videos on national television, it was possible to create spaces for public dialogue and to make the topic visible to a large part of the country’s population.

Later, a 59-minute documentary called “Colima” was also produced, recalling a massacre by paramilitary forces that took place on 17 March 1980 in the village of Ingenio Colima.

“Colima” focused on the story of a mother whose daughter was “disappeared” and her family’s subsequent search truth and some form of reconciliation.

The documentary contributed to the beginnings of a judicial process of exhumation of victims for identification and the return of the bodies to their families.

Today, Inter Press Service has published an article on El Salvador calling attention to a key issue in post-conflict communication: the right to memory.

Titled “Victims of El Salvador’s Civil War Demand Reparations”, it focuses on the 1980-92 civil war in this Central American country of 6.8 million people that left some 75,000 people dead and 8,000 missing.

It recounts the story of Mathilde and Macario Asencio, who are still looking for their son Salvador Arévalo Miranda, who was captured and “disappeared” by the Salvadoran army in August 1988.

“We have been in this struggle for almost 30 years, we are old and sick, but we will not tire, we will not stop until they tell us what they did with him,” Asencio told IPS, holding a portrait of her son.

Elsewhere in Latin America, appalling stories are still coming to light, such as the discovery in Colombia of a mass grave containing the bodies of some 2,000 as yet unidentified people, victims of the country’s civil war.

WACC is a staunch supporter of the right to memory as one among a number of communication rights without which peace, security, and social justice remain unattainable.

On Remembrance Day, it is vital to recall the names of ordinary people alongside those who fought and died on behalf of their countries. Only the living can remember.