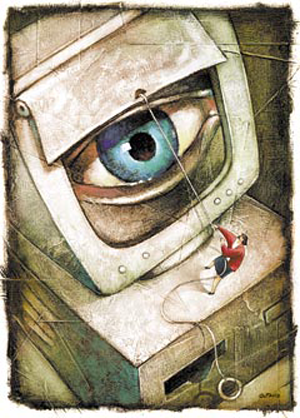 The terms of citizenship and social life are rapidly changing in the digital age and no issue highlights this any better than privacy, according to a report from the Washington, D.C.-based Pew Research Center.

Privacy has always been “a fluid and context-situated concept and [is] more so now as the boundary between being private and being public is shifting,” wrote the coordinators of the report, titled The Future of Privacy. It was released on Dec. 18 and is described as a collaborative effort based on the input and analysis of Lee Rainie, Director, Internet, Science and Technology Research and Prof. Janna Anderson, Director, Elon University’s Imagining the Internet Center.

It is part of a series of Pew Research Center reports tied to the Web’s birthday. Some of the studies look at how far Internet use has penetrated people’s lives and some examine experts’ assessments of the technology environment by 2025. Throughout 2014, the center’s Internet Project is marking the 25th anniversary of the creation of the World Wide Web by Sir Tim Berners-Lee.

“Public” has become “the default modality, with privacy declining,” wrote Stowe Boyd, the lead researcher for GigaOm Research in his response in the study. “In order to ‘exist’ online, you have to publish things to be shared, and that has to be done in open, public spaces.” If not, people have a lesser chance to enrich friendships, find or grow communities, learn new things, and act as economic agents online, he said.

Moreover, personal data are the raw material of the knowledge economy, lying at the heart of business models at technology companies and other traditional firms such as retail, health care and entertainment. “We are at a crossroads,” noted Vytautas Butrimas, the chief adviser to a major government’s ministry.

This issue is at the center of global deliberations. The U.N. is working on a resolution for the General Assembly calling upon states to respect—and protect—a global right to privacy.

To explore the future of privacy, the report authors canvassed thousands of experts and Internet builders to share their predictions. Overall, 2,511 respondents were asked whether policy makers and technology innovators will be expected to create a secure, popularly accepted, and trusted privacy-rights infrastructure by 2025. Could such a structure allow for business innovation and monetization while also allowing individuals to protect their personal information?

Some 55% of the respondents said they do not believe that an accepted privacy-rights regime and infrastructure would be created in the coming decade, while 45% said yes.

Many shared the opinion that online life is, by nature, quite public. An anonymous respondent even went so far to say, “Privacy will be the new taboo and will not be appreciated or understood by upcoming generations.” Respondents also suggested that a fluid environment will continue to confront policy makers.

The full report may be accessed here.