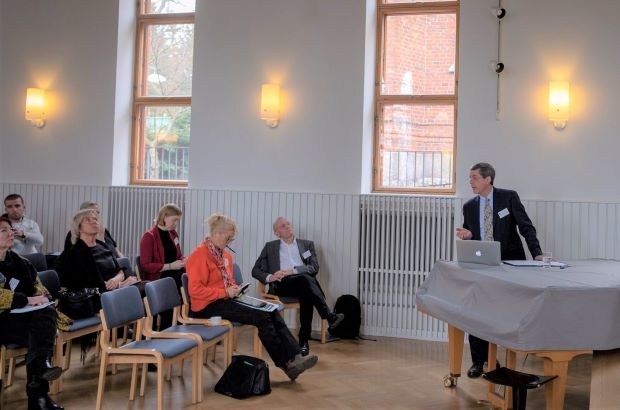 Posted at 08:57h in News, WACC Europe by Staff 0 Comments

While there are no “one size fits all solutions” to address communication rights in a divided world, Lee said “a crosscutting concern is shrinking public spaces for communication where digital technologies are expected to play an enlarging role.”

Lee noted that the communication rights of people today are affected by the global trend of “shrinking public spaces,” which in turn “compound the challenges posed by digital technologies.”

Lee gave a global overview of “Communication Rights in a Divided World,” on April 10, the first day of a joint seminar in Helsinki organized by WACC-Europe and the Conference of European Churches. The theme of the gathering is “What makes us so angry? Hate speech, fake news, and communication rights.”

While digital technology has enabled people to connect and share information like never before, it has also created “new risks and ethical dilemmas that affect human rights,” said Lee. Of particular concern, he said, is “what is shared, with whom, and how personal data are stored and accessed.”

Digital technology has contributed to the advancement of the right to freedom of opinion and expression, which includes the right to receive and share information, and the right to communicate, Lee noted.

However, it has also increased “unlawful conduct by governments and service providers…that can infringe people’s rights and increase digital vulnerability,” said Lee. “Potential abuses include disrupting or completely shutting down systems, the misuse of information for surveillance, censoring speech, deleting or blocking data, and the forced distribution of politically motivated messages via network operators.”

Women, in particular, are more likely to become victims of cyber violence and hate speech than men, said Lee, citing a study commissioned by the European Parliament. The research showed that women experience cyber violence on a variety of platforms – social media, web discussion sties, search engines, messaging services, dating apps, chat rooms and comment sections of media. It showed age as a significant factor in the prevalence of such violence, with young women constantly under threat of sexual harassment and stalking. “Cyber violence threatens women’s fundamental rights and freedoms, their dignity and equality and impacts their lives at all levels,” the research said.

Lee noted the threat of “surveillance capitalism,” which preys upon billions of unsuspecting people using free services offered by providers who monitor their behaviour, “often without their explicit consent.”

Other challenges include making digital access “available to everyone according to essential needs, regardless of income or geographical location,” said Lee, citing an article written by Clifford G. Christians, for WACC’s journal, Media Development. Christians also cited the “complexity” of blogging technology, in which “deep structures and sources are easily hidden and difficult to recover,” the profusion of interactive violence in video games and web-based websites, and pornography among other challenges.

Lee underscored the United Nations Human Rights Council’s position that “the same rights that people have offline must also be protected online.”

He noted that World Wide Web founder, Sir Tim Berners-Lee, himself has called for “a better web that serves all humanity,” and urged governments to not only ensure that markets remain open and competitive, but to protect people’s rights and freedoms online. Berners-Lee also said companies must not sacrifice people’s human rights, privacy and security, in the pursuit of profit.

Aside from truth, human dignity, and non-violence, Lee added WACC’s own guiding principles as essential to achieving communication rights.

Meanwhile, during a sermon, the Rev. Juha Rajamaki urged Christian communicators attending the seminar to first look inside themselves when addressing the issue of hate speech and disinformation.

“Change must start from within – whatever you wish that others would do to you, do also to them,” said Rajamaki, director of communications for the Evangelical Lutheran Church of Finland, and former president of WAC Europe.

Easter – which Christians around the world will celebrate April 21 – provides a powerful message, he said, that, “we are not left alone with our weakness, but given the strength to overcome the barriers of hate and anger, to meet and love our neighbor.”

He cited how the serpent offered Eve “the alternative truth,” and how the high priests gave false testimony against Jesus. “These are examples of the same questions we are dealing with today in Europe and around the world.”

Could the Bible offer some solutions since some of these situations resonate in today’s world? Rajamaki said remaining silent, as Jesus did when he was confronted by the high priest, “seldom helps.” But the prescription to follow The Golden Rule, “do to others what you would have them do to you,” which is mentioned several times in the Bible, could be an answer.