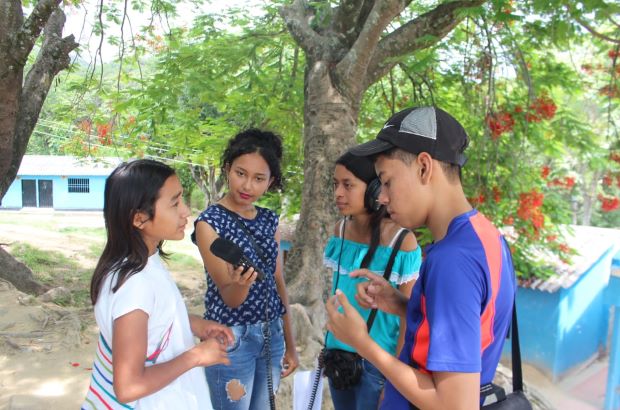 Tayrona Estereo was established in 2006 by Organizacion Indigena Kankuama an Indigenous organization based in the Sierra Nevada region.

The training was part of a project co-funded by WACC and Cultural Survival to help the radio station update its equipment, build the capacity of local Indigenous youth interested in becoming members of the station, and produce new content for Indigenous communities in the area.

The demand for training was such that the radio station had to accommodate 15 more young people than the 35 organizers had originally intended.

“Feedback was very positive and new leadership skills emerged” among the youth who took part in the training, said Tayrona Estereo in its final report. “Radio production is an excellent way to develop leadership skills among youth.”

“The work of Tayrona Estereo in the Sierra Nevada de Santa Marta region of Colombia is essential,” said Lorenzo Vargas, WACC program manager for Communication for Social Change. “It helps to advance Indigenous rights and governance, reinforces cultural diversity, and helps create the conditions for the emergence of a culture of peace and mutual understanding –  a much needed contribution to Colombia’s post-conflict era.”

Organizacion Indígena Kankuama was established in the mid-1990s, when the Colombian armed conflict was affecting Indigenous communities in the area. [A report by the UNHCR in 2005 said clashes between the Colombian army and guerrillas from the Revolutionary Armed Forces of Colombia (FARC) had displaced thousands of Indigenous people across the country. Colombia is home to over 80 Indigenous groups who, at just under one million, comprise 2-3% of the population. In 2016, an agreement between President Juan Manuel Santos and FARC ended Colombia’s 52-year civil war.]

In the early 2000s, Organizacion Indigena Kankuama began to develop plans for a community radio station that would provide community members with access to information, as well as a platform for promoting Indigenous culture, encouraging debate and participation in issues that affect their lives. Tayrona Estereo was officially established in 2006.

Photo above: Young Indigenous  Colombians practice what they learned from a media production and communication rights training organized by WACC partner Tayrona Estereo.