Posted at 11:39h in Media Development by Jessica Mudditt 0 Comments

Former political prisoner Nay Phone Latt, 34, is the secretary of PEN Myanmar and executive director of the advocacy group, Myanmar ICT Development Organization (MIDO). In April 2014 he launched the anti-hate speech movement panzagar (“flower speech”), which has campaigned on social media and in public using street theatre. He spoke to Mizzima Business Weekly’s Jessica Mudditt about his passion for information and communications technology and his efforts to create a more tolerant society.

What sparked your interest in ICT?

It was during the 18 months I spent in Singapore from 2006 that I learnt how powerful it can be when used effectively. Myanmar was completely different back then – we had very little electricity and even less access to the internet, whereas in Singapore, my friends never needed to shut down their computer or to log off from Gmail. I started working as the editor of an online magazine and my friends taught me how to blog. I really enjoyed it because I could write whatever I wanted and in my own language.

So when I came back to Myanmar I wanted to keep blogging – but at the time even using Gmail was illegal. I knew of the dangers of blogging so I never posted political content on my own blog – not even during the Saffron Revolution in 2007. I used to send articles to my friends with blogs overseas. However just before the Saffron Revolution I organised a seminar called “Why we blog” to try to introduce people to this type of technology – but after that I became well known to the military government.

Were you aware of the risk you were taking by promoting blogging in Myanmar then?

Yes I was, but that was also partly because I come from a political family – my parents and grandparents were NLD members and I was a NLD youth leader. I knew I could end up in prison at any time; so many people were being sent to jail. So it wasn’t a big shock when I was interrogated. I was forced to hand over my Gmail password – I was told I would be hung if I refused.

I had several different accounts and I gave military intelligence a password to an account that I thought was “safe.” However they found a cartoon of [Senior] General Than Shwe that someone had sent me and I got a 16-year sentence for that. I got another five-and-a-half years for owning a VCD of one of Zarganar’s performances that was a bit critical of the regime.

How did you react to such a harsh sentence?

The thing that saved me was that I knew I wasn’t alone – so many of us were in the same situation. Zarganar was also in Insein Prison1 at the time, although we weren’t able to talk to each other because we were kept in separate parts of the prison. And although the food was really bad and we couldn’t go outside, I had a daily schedule that kept me from getting too bored. I spent an hour reading, meditating, learning English, relaxing, and I also taught some of my cellmates about ICT.

What were your reasons for founding MIDO?

I decided to set up MIDO because Myanmar’s political situation had changed somewhat: things were more open. However the problem is that although the country is more open and there are new forms of technology available, awareness about ICT remains very low because it’s not a subject taught in schools. The only people who have a chance to learn about ICT are those who can afford to attend a costly private school. And the University of Computer Studies in Yangon lacks basic facilities.

So the first project I set up was ICT training for staff at local organisations, who were able to learn how to use the internet effectively and why hate speech is dangerous and unacceptable. We were invited to run classes for members of the Chin Youth Associations last September and we also have connections with the National League for Democracy, of which I’m a member.

I’ve given lectures at NLD headquarters around the country as well as many other different organisations. I’d also like to work with the Ministry of Education and the Ministry of Information to create a long term solution for addressing the gap in our education system regarding ICT, but so far it hasn’t happened.

Why did you decide to campaign against hate speech? 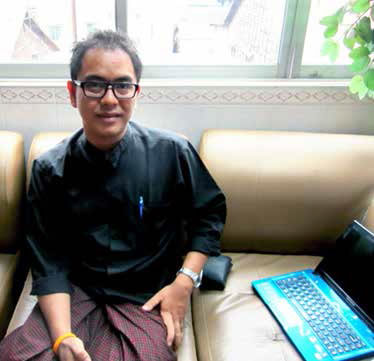 I am really worried about our country’s future. The religious conflicts that exist aren’t a new problem – it’s been a technique used by every government, including the British administration. If we look back throughout our history we can clearly understand the phenomenon as a “divide and destroy” tactic used to prevent people from being united and therefore more powerful. But the problem now is that the young generation are spending so much of their time on social media that they aren’t learning about this and don’t understand the real perspective behind the violent events that are taking place.

Our reading culture has changed – attention spans are shorter and most young people just want to digest very small amounts of information. For example, when I post an article on my Facebook page, in less than a minute there are so many “likes” – but they obviously hadn’t even had time to read the article! This is one of the reasons why I don’t keep a blog anymore – and I know of other bloggers who have also given up. However I do have plans to write a book about my time in prison – but I want to focus on the positive things that happened, rather than all the negative stuff.

What’s the most common justification you hear from those who believe hate speech is acceptable?

People say they have the right to express themselves however they please. We respond by explaining the difference between saying something like, “I hate you” and “I hate them and want to kill them.” Some forms of hatred are very dangerous for society and shouldn’t be tolerated.

Who are the targets of hate speech?

It’s a big problem in Rakhine State, but hate speech has now spread from previously being targeted towards the Rohingya people specifically to Muslims in general. There’s also a lot of hate speech about foreigners in Rakhine State. Hate speech against the gay community has flared up over the last six months after the media reported the marriage of a gay couple. Then there’s hate speech about China – not against the people but their government. Although internet penetration rates are still low, the problem is getting worse and my concern is that it will continue to worsen unless people take action.

Describe your involvement with PEN’s research project on hate speech.2

We are monitoring four aspects: print media, online media, social media and content on VCDs. I’m responsible for monitoring social media, which is mostly scrutinising Facebook accounts. I take screen shots of pages that contain hate speech. It’s a three month project and we’ll publish a report of our findings on International Peace Day on September 21. We’ll distribute the report to members of the government and civil society groups so that people become more aware of the issue, and hopefully take action. It will also be available to download on PEN Myanmar’s website.

What forms of hate speech exist in the media?

Following the riots in Mandalay, for example, there were some very problematic statements made by members of the [regional] government. We believe that statements that incite hatred and violence should not be published and editors need to start taking responsibility to ensure this. The problem is that there are so many new journals now, but very few journalists – as well as editors – are well trained in media ethics. Some lack any concept of it.

Are those using hate speech fanatics?

There appear to be two types of people using hate speech – some are doing it intentionally while others are actually paid staff. I don’t want to discuss who it is that might be paying people to spread hate speech, but the fact that some people are constantly online and within a minute after posting something on their Facebook account there are an enormous number of “likes” and “shares” indicates that it’s an organised activity by a large group of people. I’ve also noticed that many pages share a lot of similarities and use the Buddhist flag or national flag, or an image of the Buddha as profile shots.

You were in jail when Time magazine named you one of its 100 “Courageous Heroes” in 2010. Were you aware of the honour?

Yes I was – a warder told me. It gave me strength and it was also a very useful thing for political prisoners in general, as well as for me personally. After I received the award, the warders knew that I was known in the international media and organisations so they didn’t dare to treat me as badly as others, particularly the criminals, who were regularly beaten. I was even allowed to start receiving English-language books from my parents – I told the warders that I would tell the international media if they didn’t allow it! My parents visited me every month and exile media groups would then call them to ask what I had said. Knowing that I hadn’t been cut off from the outside world was very good for me.