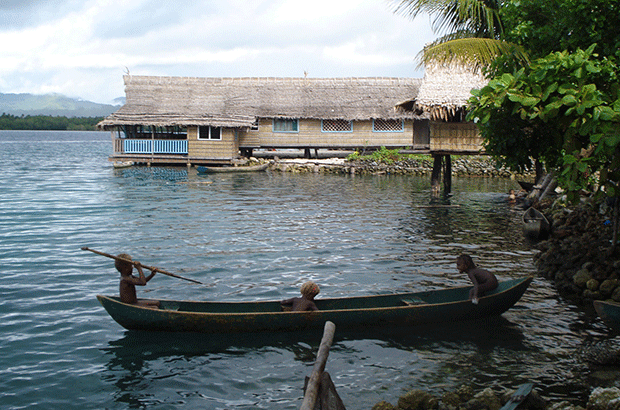 Posted at 21:11h in Media Development by Catherine Wilson 0 Comments

In the Solomon Islands, where the population is scattered across an archipelago of 900 islands, remote communities experience geographical barriers to accessing information. Photo: Catherine Wilson.

Despite positive media freedom ratings and dedicated journalists, the geographical and socio-cultural complexity, as well as mineral resource dependency, which characterizes the developing Pacific Island states of Papua New Guinea and the Solomon Islands means that the mass media’s role in effectively supporting right to memory, democracy and good governance faces significant challenges.

The remote rainforest-covered islands of Bougainville are more than 900 kilometres from the gritty streets of Papua New Guinea’s capital, Port Moresby. But the verbal buzz among some of the internet-savvy citizens of the main town, Buka, in late May 2016 was about brewing civil discontent on the mainland.

Growing anger about Prime Minister Peter O’Neill’s perceived attempts to evade investigations into his alleged involvement in corruption entailing public funds of AUD$30 million led to a rally on the 8 June by one thousand students at the University of Papua New Guinea (PNG) in Port Moresby. But the event turned violent when their plan to demand the Prime Minister’s resignation at Parliament House was thwarted by armed police squads.

Media reports claimed more than 20 were injured in the ensuing shooting and clashes, while physical assault of a female reporter from the National Broadcasting Corporation (NBC) was quickly condemned by the PNG Media Council, Pacific Islands News Association and Reporters without Borders (RSF). Riots followed in other cities across the country.

Yet activists were far from impressed by local media coverage, which was hindered by an official reporting ban. Deeming news stories to be pro-government and biased, activists destroyed copies of the country’s two main daily newspapers, The National and Post-Courier, being sold by nearby.

“They were not actual reports of what we students are portraying at the university. That’s why, to show our frustration, we went out to the bus stop and burnt those papers… we have no trust in the media,” a student protest leader was quoted as saying in an article by Carmella Gware on the news site Loop PNG.1

It was a moment to reflect on the media landscape in this island state often labelled a “vibrant democracy”. PNG’s media is declared free by RSF, but its performance in holding the government to account, supporting right to memory, equitable access to information and informed debate in reality faces substantial hurdles.

It is not unknown for local journalists who tackle politically sensitive issues to be subjected to pressure by politicians and powerful corporate actors or even to suffer physical assaults. Politicians retaliate quickly, in particular, to stories implicating them in corruption or wrongdoing.

However, discussion about governance and public dissent should not exclude factors related to the country’s immense mineral wealth, such as an unhealthy alliance between the political elite and foreign corporate sector, which is linked to corruption.

Local writer and blogger, Martyn Namorong, has emphasised the connection between corruption and “the distortion of the distribution of natural resource wealth in favour of a few multinational corporations and a powerful rent-seeking class.”2

Thus low human development, with 40% of people living below the poverty line, persists in a country where reserves of copper, gold, nickel, timber and natural gas have driven some of the world’s highest GDP growth rates over the past decade. But the state-corporate alliance is also connected with suppression of citizens’ opposition to resource extraction projects and their environmental and social impacts.

Some extractive companies operating in the country have admitted in recent years to providing material support to local police units, such as vehicles and fuel. This assistance has implicated them in state attempts to quash community objections to their projects, for example, when police destroyed homes, attacked and evicted villagers in the vicinity of the Porgera gold mine, majority-owned by Barrick Gold, in 2009.3

In 2012 the media’s role as watchdog was tested when a devastating landslide emanated from a quarry in the vicinity of the massive PNG LNG natural gas project in Hela Province in the highlands. Tragically, two villages located below the quarry were buried with an estimated 60 people killed. Previously recorded safety concerns about excavation work being carried out in the quarry by an Esso Highlands subcontractor were ignored in the National Disaster Centre’s report, which attributed the incident to geological weaknesses and high rainfall.

Critical perspectives on the disaster appeared on social media sites, such as Act Now PNG, PNG Exposed and LNG Watch. But, despite factual and scientific errors being identified in the NDC report by an international landslide expert and serious questions raised by local communities about the company’s activities, the stark anomalies surrounding the disaster failed to provoke local in depth investigative reporting. And calls by relatives of the survivors and expert observers for a Commission of Inquiry were met with official silence.

Being a journalist in PNG is by no means an easy occupation. In addition to personal security risks, they are some of the lowest paid professionals in the country.

Empowering the professionalism of journalists with more substantial industry training, as identified by the International Federation of Journalists, is also paramount to more rigorous reporting of governance, social justice and development issues. It’s also imperative to strengthening the trust of the people they have a role in representing and combating the fear Papua New Guinean informal economist and blogger, Busa Jeremiah Wenogo, expressed on the website, PNG Attitude:

“Thank god we have not surrendered our democracy to extreme forms of government. Yet I cannot help but ask how long we can go on like this before that happens.”4

Geographical barriers to information and the media

Yet it is not all about state interference. In PNG, more than 80% of people live in rural areas, many isolated due to arduous mountain terrain, dense forest and absence of a nationwide road network. In the neighbouring Solomon Islands the population of around 560,000 is scattered across an archipelago of more than 900 islands.

Thus radio is the most popular and accessible communication medium, while television and newspapers, with rural distribution impeded by difficult transport logistics, only capture a fraction of the audience, mainly in urban centres.

There is also the challenge of limited resources. Newspapers in the Solomon Islands, for example, are unable to support a network of staff in other parts of the country. Nine of every ten journalists are based in the capital, Honiara, with consequences for coverage of events and issues in provincial areas.

And despite the development of telecommunications infrastructure gradually improving in the region, internet penetration, even via mobile phones, remains very low; in PNG it is estimated at about 6.5%. 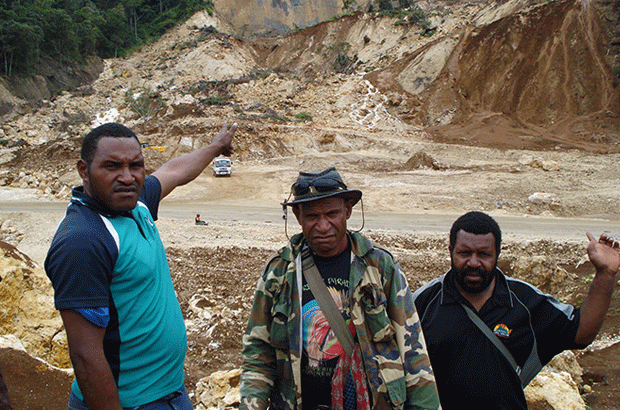 Villagers in Hela Province express their anger and grievances following a landslide which devastated their villages in 2012, Papua New Guinea. Photo: Catherine Wilson.

The hurdle of illiteracy

While the national literacy rate in PNG is about 63%, independent studies reveal it to be less than 15% in some rural areas. In Renbel and Isabel provinces of the Solomon Islands, adult literacy rates are 33.9% and 17.5% respectively.6

Thus unique island geography and low literacy prevent many people gaining access to information, having their voices heard at the national level and engaging in informed public debate, even with these principles enshrined in both nations’ constitutions. Consequently the gulf between the political elite in the nations’ capitals and vast majority of citizens residing in the hinterlands is also deepened.

“Many citizens [in PNG] feel out of touch with the national government and do not understand the policy development and implementation processes,” ABC (Australian Broadcasting Corporation) International reports.7

There are ramifications, too, for the dissemination of critical development information. Geography and illiteracy are factors in the serious knowledge deficit, especially in rural communities, about breast cancer, one of the most serious diseases affecting women in the Solomon Islands, and Tuberculosis in PNG.

The media’s role in generating focus and reach on these issues is under-utilized. Currently inadequate information and poor rural health services are factors in mortality occurring in 59% of women diagnosed with cancer in the Solomon Islands and Tuberculosis reaching epidemic proportions in PNG.

Customary attitudes and beliefs influence media coverage of some social and health issues, for instance, rape and sorcery-related violence. Cultural disapproval of such violations inhibits many people who are affected from speaking out.

In the Autonomous Region of Bougainville, which experienced a decade-long civil war (1989-98), there are constraints in some traditional rural communities to discussing certain wartime atrocities, including rape. In the northern coastal villages of Bougainville’s Buka Island, the routine of daily life seems carefree. But beneath the surface there is a silence about what happened during the conflict. People do not talk about the killings, near deaths during interrogations or the mass graves.

“The major thing is that they [people] are traumatised… and there are some areas where the culture prevents us from talking; it is taboo,” Dorcas Gano, President of the Hako Women’s Collective, a local community organization, explained.

Community silence and the lack of any official investigation into human rights abuses during the conflict are reflected in limited media inquiry in this area.

Sorcery-related violence, which frequently makes international headlines, is also a culturally sensitive issue in PNG. Belief in witchcraft, known as “Sanguma”, and its power to cause deaths, illness and misfortune is widespread throughout the country.

In 2013 the government moved to classify sorcery-related killings as murders punishable by the death penalty. But, even with legislative reform, community and cultural pressure still impedes many victims and witnesses reporting incidents to the police or the media. It is considered particularly dangerous for women, who face a higher risk of sorcery accusations and attacks, to speak out.

According to Dr Arnold Kukari of PNG’s National Research Institute, sorcery-related violence drives women to “live in fear and isolate themselves from active involvement in all spheres of development.” Josephine, a courageous woman from the highlands region, who has been accused of witchcraft, articulated the challenges for public and local media debate:

“People have to acknowledge and talk about the problem before they can find a solution. At the moment, people don’t know how to come out of this thing, ‘Sanguma’, they don’t even know how to defend themselves.”

Thus the country’s media faces cultural impediments to both rigorously addressing such issues, which are hindering human development and democratic participation, and representing the voices and memories of some of the most marginalised members of society. Yet, as ABC International reports, PNG citizens want progressive journalism which offers “an independent voice that provides all sides of the story without skirting over negative aspects.”8

Ultimately citizens want the media to more effectively work for and represent them. Population reach would benefit from improving the technical reach and affordability of access to digital media and incorporating more local languages and dialects (there are more than 800 languages spoken in the country) into radio services. Addressing the high level of foreign ownership in television and print media is important to improving balanced reporting and local content.

But a member of PNG’s Institute of Medical Research, Suparat Phuanukoonnon, defined an important strategy to making the media work better for ordinary people, their development and democratic participation, when she said that communication should not just respond to local contexts, but also “how people receive and process information and believe the information enough to take action.” That, in a country with an estimated 1,000 different cultural groups, is an immense and complex task.