Thai freedom of expression: Waiting for the dawn
20678
post-template-default,single,single-post,postid-20678,single-format-standard,theme-bridge,bridge-core-3.0.1,woocommerce-no-js,qodef-qi--no-touch,qi-addons-for-elementor-1.5.6,qode-page-transition-enabled,ajax_fade,page_not_loaded,,qode-title-hidden,columns-4,qode-child-theme-ver-1.0.0,qode-theme-ver-29.2,qode-theme-bridge,qode_header_in_grid,qode-wpml-enabled,wpb-js-composer js-comp-ver-6.10.0,vc_responsive,elementor-default,elementor-kit-41156

23 Feb 2015 Thai freedom of expression: Waiting for the dawn

The increase of political conflict in Thailand from late 2013 to 2014 contributed to the downfall of freedom of expression and freedom of information both on the public and personal levels. In 2015, Thailand is going forward with a coup d’état government that is trying to infuse people with propaganda in the name of so-called “morals” or “Thai tradition”. We are now going back to the age of top-down communication from the head of state to the people, the communication model that used to be in Thailand 50 years ago.

In November 2013, the latest political crisis arose when there were protests against Prime Minister Yinglak Shinnawatra. The goal was to oust the government, which was believed to be involved with and manipulated behind the scene by the former Prime Minister Thaksin Shinnawatra. The protest began after Parliament passed the Amnesty Bill, which would pardon offences of politicians and people behind political movements. If passed, this Act would have been retroactive to the year 2004.

The bill was not approved by the Senate, but this did not stop the protests, which sought the overthrow of the entire government and all its supporting networks. However, the protest ended in May 2014 when the coup d’état took place and the government lost its status by implication. The current head of state is General Prayut Chan-o-cha, Commander-in-Chief, who took office as prime minister. Because of the law and especially under a coup d’état time, protests and demonstrations could not easily take place.

Direct threat to freedom of expression

Freedom of communication is assured in more than four articles (45, 46, 47, and 48) of the Constitution, which is the supreme law of the country. All four articles stipulate the freedom to speak, write, print and advertise, the protection of journalists and mass media organizations, prohibiting government ownership and intervention by giving financial support. The Constitution was torn up by the coup d’état, but even during the time when the Constitution was still in effect, the threat to media freedom was still posed both directly and indirectly by politicians, the government and non-government people (Thai citizens).

An online news agency has compiled information and produced a timeline showing the threats to the media freedom from 2013 to 2014 (Prachatai News Agency, 2014). The report shows that there were over 20 incidents of physical force or verbal confrontation. All are considered intimidating violence. Examples are an army troop gathered around the front of ASTV news office, requesting that the agency apologize to General Prayut Chan-o-cha, Commander-in-Chief of Royal Thai Army, for an interview and voicing strong opposition to how the ASTV Manager reported the news.

Moreover, a protest group called “People’s Democratic Reform Committee” (PDRC) attacked a journalist who was reporting news in the area. Journalists from Channel 3 and Channels 9 and TBS were rebuked and also attacked on 23 December 2013. The protesters said they were upset about the false number of protesters being reported and that the news took the government’s side. A journalist from The Nation was attacked on 16 January 2013.

The government itself or people in authority are also using media – namely Channel 11, 3 and 9 of the state-owned public broadcaster Mass Communication Organization of Thailand –to talk to people and screen information about protesters. The prime minister’s legal advisor has threatened the media with a lawsuit for slander once in a while. Later, this attempt switched to messages posted on social media using the Computer Crime Act and Internal Security Act.

Indirect and structural threats to freedom of expression

Freedom of expression has also been threatened indirectly by media owners imposing their authority. This is a form of structural violence. An obvious example was when a TV commercial was suddenly played in the middle of “Hardcore News Program” on TV that was reporting on a water management project done by the government and a private company in Korea. It investigated the project and questioned the government budget allocation (26 June 2013). The government denied any involvement in subsequently altering the TV programming schedule.

Similarly, broadcasting a political discussion panel on TV’s “Tob Jote Pratesthai” (Solving Thailand’s problems) was postponed by Thai PBS TV station. Four episodes had been aired, but the last one was cancelled when a group of monarchy supporters and an opposition scholar were discussing the monarchy. The TV station stated that the decision was based on feedback from viewers and for reasons of social responsibility in order not to create further conflict in the country about sensitive matters (15 March 2013).

Even entertainment programs such as soap operas have been affected by politics. A series titled “Nua Mek 2” on Channel 3 was banned when it screened a story about a government filled with corruption and power struggles. The government denied all responsibility for the censorship and Channel 3 management stated that the censorship was done by the TV station because of some inappropriate content (4 January 2013).

Self-censorship also threatens mass media freedom. When the military government took over after the coup d’état in May 2014, freedom of information and freedom of expression became even more restricted. The military authority announced a state of abnormality and it is controlling matters in accordance with the national security principles.

Silence or self-censorship has become common for fear of further conflict or fear of being seen as an outsider. This shows an intolerance of different opinions and it demonstrates the “spiral of silence” theory where thinkers do not have the courage to express an opinion different from the mainstream. 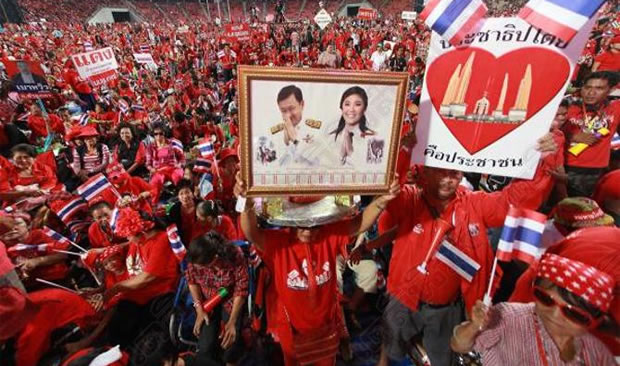 The pro-gorvenment group called “United Front of Democracy of Democratic Against Dictatorship” (UDD) or the “Red
Shirts” also staged the protest to show their political power. Source.

Because of the situation in Thailand, it comes as no surprise that the country’s freedom of expression and freedom of information has been “Not Free” since 2012. Freedom House ranked it 64 (0 = Best, 100 = Worst) from “Partly Free” prior to 2012 (Freedom House, 2014).

Freedom House has compiled how the law is used as a tool to limit freedom of expression. The lèse-majesté́ law, the law that criminalizes defamation, Internal Security Act, Computer Crime Act all can be used without any consideration of the main legislation that assures freedom under the Constitution.

Moreover, Freedom House showed that media ownership is a monopoly of a very few people, resulting in lack of diversity in news content. While broadcast media are still owned by the government, there is a National Broadcasting and Telecommunication Commission (NBTC) founded in 2010 to regulate the media’s role of serving the people and assuring freedom. Because broadcasting has been tied to people with political and military powers for such a long time in the history of Thailand, reforming it needs well-planed tactics and strategies.

Southeast Asian Press Alliance (SEAPA) also published an annual report on press freedom and rights titled “Media at Political Crossroads” (Southeast Asian Press Alliance, 2014) which clearly reflected the landscape of Thai media today. The main concern was about the political conflict that affected freedom of expression both of the media and the general public. There are threats both from the state authorities and influence from ownership and advertising businesses. At the same time, there was also the problem of ethics and professional norms of media practice.

Online society and the challenge to the future

At present, social media have become very popular in Thailand. Many sources confirm that Thailand is one of top countries in which people use Facebook, Twitter and most recently Line. This may increase freedom of expression among Thai people. More importantly, freedom of expression may no longer have to rely on mainstream media only, but people will now have their own channels of communication.

However, censorship of social media has become more intense as conflict and turmoil escalated over the last two years. The Computer Crime Act was used more including the Internal Security Act and the lèse-majesté law. Nevertheless, online communication with no limit of time, place and target groups seems to be a positive reinforcement to freedom of information for Thai people.

The real challenge to freedom of expression is not the lack of a platform or government censorship or laws limiting freedom, but the ethics of respecting human rights, human diversity, and tolerance of different views.

Walakkamol is an assistant professor in communication at the Faculty of Communication Sciences, Prince of Songkla University, Thailand. She received her PhD from the University of Queensland, Australia where she learnt and produced her research on Peace Journalism and the role of the media on conflict resolution. Her current research and academic interest are among the concept of Peace Journalism and its application to Thai society, the role of new media in peace process and conflict resolution.