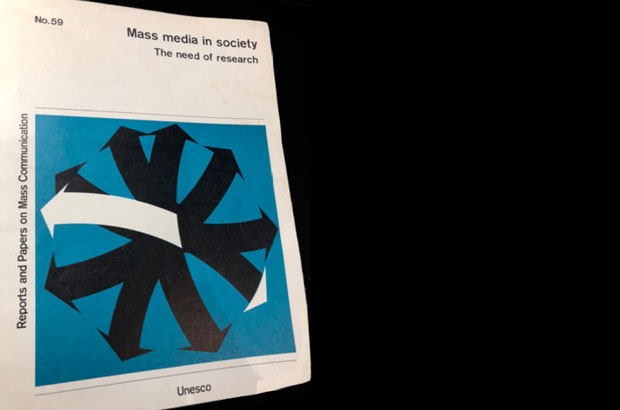 Posted at 22:45h in Media Development by wacc_kn 0 Comments

How new and how brave is the “Brave New Digital World”? When I had to clean up my office as I was retiring from university, I came across a 50-year-old UNESCO paper raising the same issues we are discussing today.

In 1969 the term “digital” was not in common use, although it literally does not refer to anything else than something using digits, which could be as simple as a counting frame, an abacus. With technological development from such mechanical to electronic devices – to computers – the road was opened to what we regard as a “digital world”. In 1969, the early pioneers of the internet were at work in the US and England for military and academic purposes, but none of the digital applications the world is familiar with today, like e-mail, World Wide Web and social media, had been thought of.

However, at UNESCO they were thinking. Ahead of an expert meeting on mass communication and society in Montreal, June 1969, they asked Professor James Halloran of the Centre for Mass Communication Research at the University of Leicester in the UK, to outline the state of knowledge. He sketched the “optimistic view” of a communications world of the future:

“which is characterized by miniaturization, flexibility, complete accessibility and personal control – one in which pocket-size personal computers, video telephones, television receivers and transmitters will be as common as transistor radios are today. We hear of space communication satellite systems capable of transmitting simultaneously to every part of the world, capable also of linking every home and every office in the world … Computers will make the total sum of world knowledge freely available … The communication system will be a public utility service with sufficient capacity to supply each subscriber … with electronic mail, magazine and newspaper delivery, and the subscriber will be able to transmit as well as receive information. There will be freedom of choice across an unprecedented range, for the individual viewer in his [sic!] multi-media home.”

Professor Halloran expected this forecast to become possible in the 2060s. His imagination was quite precise, but the world is 50 years ahead of his prediction. The options he envisaged are already here, in a digital, electronic and networked environment.

Halloran’s forecast was certainly optimistic. There is “freedom of choice across an unprecedented range” but at a price, as global companies like Facebook and Google are formatting much of the exchange. Hence, there is “personal control” on the premises set by such big players. The “total sum of world knowledge” is not freely available for all, digital devices come with a cost and internet providers may charge more than many are able to pay. The communication system is not a guaranteed “public utility service” as telecoms fight net neutrality and discriminate between those who are able to pay for maximum access and those who are left behind.

The ethical challenges of our contemporary digital world were implied in the outline taken up by UNESCO 50 years earlier. Although they could not know the exact forms of digital technologies available today, their ethical awareness is relevant to the contemporary situation. In that sense, the “Brave New Digital World” is not so new and may not even be that brave either.

Halloran showed a particular concern for media and communication in “the developing countries”, which was the dominant term in 1969. Nor was Halloran content with the work of his contemporaries:

“Researchers tend to dwell on potential, optimum educational use, untold benefits, and overall improvement. They rarely mention exploitation. … The influence of the media in the wider socio-cultural field has not been given the attention it deserves.”

This is still the challenge in “developed” as well as “developing” parts of the globe. Halloran was criticizing the then common linear thinking of communication, occupied with the cause and effect of new technologies. New digital tools may even today spark such simple ideas about consequences, although more usually among journalists and the general public than among researchers. For example, to ask for the influence of social media on a certain social practice may miss the wider technological infrastructure as well as the social, cultural, political and economic context of use.

Mediatization
We need to look at the wider communication environment and the transformations on a broader scale. In my own research, this approach has led to mediatization theory. The core of this theoretical take is an attempt to grasp the interplay between changes in media technologies and the media system on the one hand, and social and cultural change on the other. The focus is on long-term changes that should rather be termed transformations.

The conception of a “Brave New Digital World” does not signal a simple change due to digital technologies but a deep transformation of the communication environment. Professor Halloran’s reading of the signs of future 50 years ago reminds us to be careful in assigning the contemporary situation as “new” and “brave”. There is a considerable continuity in the deeper ethical challenges. But there are definitely changes in the media landscape as well as in the social and cultural landscape during these decades.

The ongoing communication by the help of technical media could to an even lesser extent be grasped as a chain from sender to receiver than was the case 50 years ago. There are so many crossing routes and alternative media. Citizen journalism and social media publishing sidestep the gatekeepers in editorial media. The various media themselves make a connective communication environment.

There is a “poetics of digital media”, says Paul Frosh in his new book The Poetics of Digital Media (2019). Media are generators for constructing and revealing worlds, he holds. This work is performed as a matter of routine, in a “poetics of media”.

This ongoing, mediated communication makes a difference, as the formatting of messages taking place with different media technologies do matter. This occurs in the daily poetics of media for everyone but becomes more visible on the big scene. A Twitter message from President Trump differs from the same topic covered by The New York Times, not just because of different views on the issue under discussion, but also because of the different formats of these media. The choice of medium put restrictions on as well as opens up possibilities for the message.

The transformations that characterize mediatization depend on repeated formatting tendencies in ongoing mediated communication. Donald Trump’s intense use of Twitter in political debates together with his claim that the editorial media bring “fake news” has during his campaign and presidency transformed political communication in the US and beyond. I regard this change as a mediatization of the political environment.

Religion in the “digital world”
Take religion as a cultural and social field in the “digital world”. We learn from the US case, and also from European countries like Poland and Hungary, that religion is heavily involved in the populist political domain. The close link between the Orthodox Church and president Putin’s reign in Russia adds to the list. The uses of conservative religious references in nationalist policies and discourse do something to the understanding of the religious communities and traditions involved and also with the category of “religion”.

The media practices of those in power to support their political aims and to counter and suppress other voices with arguments from religion, extensively draw upon digital affordances. As do counter-voices from within religious communities. Digital technologies offer new ways to argue politically with religion. These technologies also change the communication patterns of religious communities and of individual believers in relation to established religious traditions.

A mediatization of religion takes place to the extent that religious conceptions, practices and institutions over time are changed – or transformed – in the ongoing uses of digital media and technologies. Such changes may be initiated by conscious actors. However, with the expanding datafication and role of algorithms in digital communication, transformations are built into the systems provided by Facebook, Google or other institutional players. The digital affordances and practices then contribute to change religion.

We are in the midst of the digital “revolution”. We know very well how printing technology in a historic period of unrest between Catholics and Protestants in Europe contributed to changing the religious and political landscape. It is difficult to gain oversight of the consequences of the digital transformations in the contemporary social, cultural and political environment as it happens. To look for mediatization processes may give some clues to the changes.

The 1969 UNESCO conference on mass media or mass communication in society was followed by a call for research. Today, that is also needed on the new digital world. There is a need for research on the ongoing transformations as well as attempts to understand and act by conscious citizens and believers. ν

Mass media in society. The need of research. Reports and Papers on Mass Communication No. 59. Paris: UNESCO.

Knut Lundby is Professor Emeritus at the Department of Media and Communication, University of Oslo, Norway. He wrote his doctoral thesis in sociology of religion and has been concerned with the relation between media and religion. Among his publications are Mediatization: Concept, Changes, Consequences (ed., Peter Lang 2009), Religion Across Media (ed., Peter Lang, 2013), the Handbook on Mediatization of Communication (ed., De Gruyter 2014), and Contesting Religion. The Media Dynamics of Cultural Conflicts in Scandinavia (ed., De Gruyter 2018).