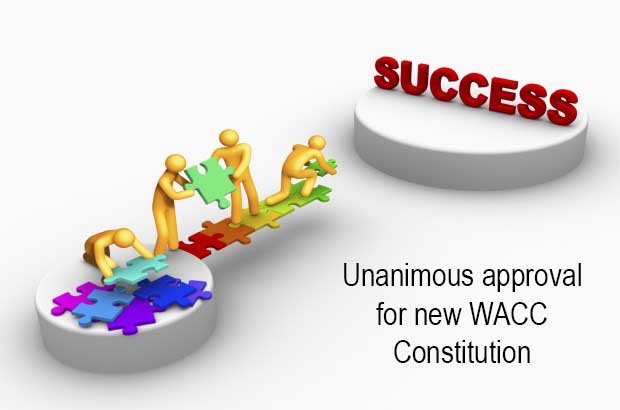 A vitally important one, but not the most exciting event in the life of a global institution, is the need to draw up and approve new governing documents.

However, after a long process of worldwide consultation, WACC members have finally approved new Articles and By-laws.

The Canada Not­for­profit Corporations Act (NFP Act) of 2009 established a new set of rules for federally incorporated not­for­profit corporations. Registered in Canada, WACC is required to submit new governing documents, without which it cannot continue.

The NFP Act contains new rules that replace parts of the old Canada Corporations Act, the law that has governed federal corporations for nearly a century. New governing documents must be submitted for approval before 17 October 2014.

Two years ago, WACC’s Board of Directors mandated a Constitution and Policy Committee to draft documents in consultation with WACC’s Regional Associations and a leading firm of lawyers in the field of charity and not-­for-­profit law.

In August 2013, WACC once again consulted its regional membership on the content and direction of the proposed documents, which were finally approved by the Directors on 27 November 2013. But those documents still needed to be approved by WACC’s corporate and personal members – which was the purpose of yesterday’s meeting.

WACC members may request a copy of the EGM Minutes here. Members can also request an audio file of the proceedings here.

The last step in this bureaucratic process will be to submit Articles of Continuance and the new Operating By-Law to Industry Canada for its approval. Watch this space!