Posted at 21:44h in Media Development by Leonardo Custódio 0 Comments 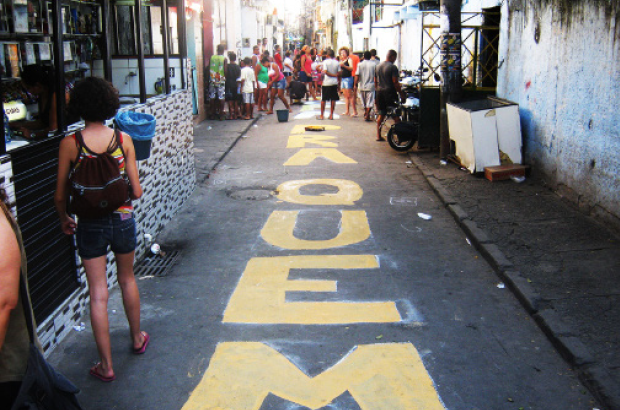 “World Cup for Whom?” Activists, artists, academics and dwellers collaborate in an artistic protest against the impacts of the FIFA World Cup in a favela in Nova Holanda, Rio de Janeiro, 2014. Photo: Author.

One factor that motivates research in the intersections between communication and development is our willingness to contribute to social change. Buzzwords (Cornwall & Brock, 2005) such as “participation” and “empowerment” indicate scholarly intentions to contribute towards more just and egalitarian societies. It is certainly an admirable cause. However, what do we do if our actions in the field contradict our well-meaning intentions?

I started thinking about the contradictions in well-meaning research after an eye-opening experience early in my fieldwork. Since 2009, I have investigated the uses of media and journalism for activism among dwellers of low-income, violence-ridden urban areas known as favelas in Rio de Janeiro, Brazil. In 2011, I started a series of yearly field trips (2011-14) to observe actions, talk to people and gather empirical materials for my study.

In the first field trip, I attended a debate about police violence in a favela. Journalists of a community newspaper had organized it. For the panel, they invited community leaders, university researchers and community media practitioners who lived in favelas. During the debate, they challenged policies and denounced police abuses. However, one of the panelists also included scholars and researchers in his criticism. He said:

“Academics have a problem: they are like demi-gods. The science of the academics is the only that suits. The knowledge of the academics is the only that suits. Therefore, I make a proposal for you who live in a favela: let us start questioning researchers who enter the favelas to do their research. Sometimes I feel like I am a rat in a lab where they research and study me. They conclude their theses, their studies and not even leave us the material that they produced. This is a shame.”1

The community leader’s eloquent case against researchers hit home. As I looked around the room, other favela-based activists nodded in support. Meanwhile, Brazilian and foreign researchers attending the event, including myself, fell silent in embarrassment. 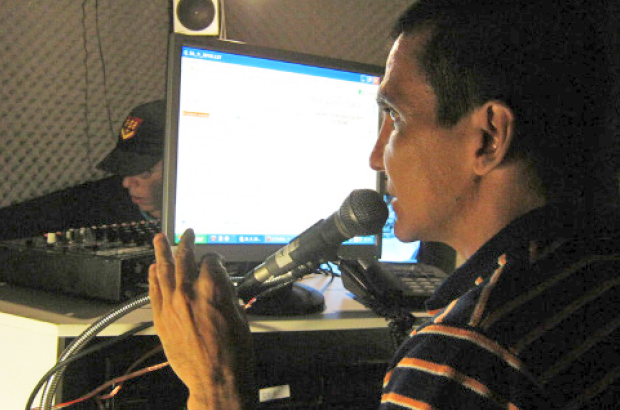 Volunteer host at the community radio of favela Santa Marta, Rio, 2011. Two weeks later, the radio was shut down by the police for lacking a permit. Academics and activists have supported the radio’s struggle for the licence. Photo: Author.

Throughout my research process, I noticed the community leader was not alone in complaining about researchers. Other activists were also annoyed about the actions of “typical” academics. That is, light-skinned, middle- and upper-class Brazilians. Even though admitting that many researchers are good partners in their struggles, some people I interviewed claimed to be tired of talking to academics. The main reason is that they hardly ever hear from the researcher or about the study after the fieldwork is over.

Perhaps I was lucky for not being a typical researcher. Some people only agreed to talk to me because I am black and come from Magé, a small, low-income, working-class city in the Metropolitan Area of Rio de Janeiro. On one occasion, an activist tried to convince a reluctant other person to talk to me by saying, “This one is different. He is one of us. He is black from Baixada [the low-income, working-class region where my town is].” It worked and I managed to talk to his fellow activist.

However, rather than feeling fortunate for being accepted, I felt concerned. Why did some of the people I met have such a low regard for researchers? Are we really contributing to social change or perpetuating inequalities? Why are we researching: for social change or our own career’s advancement? These questions kept haunting me for the rest of my research process. How must researchers deal with the contradictions between our ideals and our actions?

Questioning is certainly the first step, starting from the basic premises of development work and research. The notion of “development” itself is highly problematic. Some scholars have questioned the paternalistic methods combined with condescending and prejudicial attitudes that seem to predominate in international development work (Escobar, 1995; Manyozo, 2012). Outside academia, the thought-provoking and hilarious Kenyan-based mockumentary “The Samaritans”2 uses real-life absurdities within the scene of international NGOs acting in the country to satirize their lack of accountability and ineffectiveness.3

Back in Rio de Janeiro, the criticism of favela activists to researchers did not reflect the geopolitical imbalance of international development work. As Edward Said has argued (Said, 1993: 269), colonialist attitudes can also be a domestic problem in stratified societies like Brazil. In favelas, most dwellers are blacks or mixed-race people descended from slaves or poor migrants from Brazil’s northeast. Today, they are the under-citizens who suffer the most from neglecting, condescending and authoritarian policies and attitudes (Souza, 2005).

Unfortunately, we researchers do not seem to question our own positions in the social hierarchy as often as we should. Development work and research reflect social inequalities. Consequently, the resentment of subjects is a form of contestation. How should we deal with it? I believe there are two things we can do to tackle the contradictions between our well-meaning research goals and our actions: talk (among ourselves and with subjects) and respect subjects.

Talking to other researchers helps to identify problems and to seek solutions together. In different ways, we already do this especially regarding theory and methods. For instance, some scholars have raised the need for more innovative research that does not reflect the result-oriented mindset of donors (Thomas, 2015). Others have problematized the theoretical challenges after online-articulated mass protests arose in the Global South (Rodriguez, Ferron, & Shamas, 2014; Tufte, 2013). At the 2015 conference of the International Association for Media and Communication Research (IAMCR, Montreal), scholars gathered in a panel entitled “The future of communication for development and social change: Scholarly perspectives” to reflect about the impasses in the field.

These conversations towards theoretical and methodological innovations are important to boost our sociological imagination (Mills, 2000), but they do not solve our attitudes towards research subjects. Some conversations face this problem more directly. At the same IAMCR conference, the roundtable “Activism and the academy: Communication scholars in action” gathered scholars from around the world with similar dilemmas: balancing career and activism, improving activist-researcher cooperation, and dealing with lack of funding. However, meetings like these are often more therapeutic than effective in raising solutions.

Perhaps a more effective way to tackle the contradictions in our actions in the field is to include research subjects in the talks. This is, for example, the proposal of the Ørecomm Festival,4 an annual event which takes place simultaneously in Denmark and Sweden. The festival is a meeting of scholars and practitioners in the field of communication for development. Consequently, there is plenty of room for disagreements, mutual questionings and joint efforts for improving both development work and research.

However, opening spaces for dialogue is not enough. Most of our relationships with subjects happen in the field. It is on those occasions that I believe researchers need to enact respect towards the people in whose lives and actions we are interested. By respect, I do not merely mean treating people politely, but questioning our own position in the hierarchy of knowledge production.

Lack of dialogue is what made the community leader in Rio feel that academics are like demi-gods. He is right. We do act like demi-gods. In our research processes, most of us suddenly land in a certain place, ask many questions, observe people closely and then disappear. After that, we present our findings in our departments or in increasingly expensive conferences. Sometimes, researchers do return to the field and present results. Nevertheless, once the study is published, how could subjects object to, make suggestions or question our claims?

This is perhaps the root of what has seemed to me the fallacy of partnership and cooperation. The fallacy happens when researchers claim to cooperate with subjects, but do not realize they are the only ones recommending solutions. Inputs from subjects hardly ever have an impact on researchers’ actions and writings. It is neither cooperation nor dialogue if only one side has to reflect and change ideas and actions because of conversations.

Concerned about the risk of reproducing the top-down relationship with the people to whom I talked, I tried a different approach in my research. In my last field trip, I presented drafts to the subjects of my study. I wrote a summary in Portuguese of the ideas I wanted to develop in my thesis. In that summary, I also explained how I intended to use what I had learned from them.

Every time I met one of the subjects and showed them my raw analysis, I shivered. What if they thought my explanations did not match reality? What if they accused me of victimizing them or over-dramatizing their reality to shock and thus increase my readership? Some of them were university students. What would I do if they challenged the concepts I used? It was a nerve-racking process. For a few moments, I felt fragile.

Luckily, the results were positive. Some people had critical remarks. For instance, one questioned the term “media activism”. She considered the term too “gringo” and not suitable to explain their actions. However, she showed satisfaction with my use of “favela” as a prefix to it as an effort to make the context clear. Others were mostly pleased with my attitude of showing them unfinished material. They said they felt appreciated for having their evaluations taken into account.

Finally, the most pleasing feedback came as a proposal. One of the activists, a photographer and filmmaker, suggested we turned the results of my study into a script for a documentary. I am not sure whether we will do it or not. Nevertheless, it certainly felt that my research could contribute not only to the scholarly debates, but also to grassroots practices of communication for development and social change.

Overall, what I learned from this process is that the only way to prevent contradictions between what we wish and how we act as researchers is by valuing dialogue and respect with those people in whose lives we are interested. Not by pretending to listen or merely being polite, but to act in ways that are discomforting and challenging to ourselves. To act in ways that show we acknowledge the social hierarchy in our relationship with subjects of our studies. To act in ways to open our research processes to inputs and evaluations from them.

In other words, we improve our relationships with subjects when we have respectful conversations. Not under the pretence of empowering them, but to reduce our power as researchers. In short, let us strive for truly mutual learning experiences in our research processes.

1. The speech by André Constantine, a community leader at Morro da Babilônia, can be seen here (in Portuguese): https://www.youtube.com/watch?v=P8UnW9Ws07A

4. The most recent edition of the Ørecomm Festival happened in September, 2014. See the page of the event here: http://voiceandmatter.net/ (accessed September 29, 2015)

Escobar, A. (1995). Encountering development: The making and unmaking of the third world. Princeton: Princeton University Press.

Tufte, T. (2013). Towards a renaissance in communication for social change: Redefining the discipline and practice in the post ‘arab spring’ era. In T. Tufte, N. Windermuth, A. S. Hansen-Skovmoes & W. Mitullah (Eds.), Speaking up or talking back? Media, empowerment and civic engagement among east and southern African youth (pp. 19-36). Gothenburg: Nordicom.