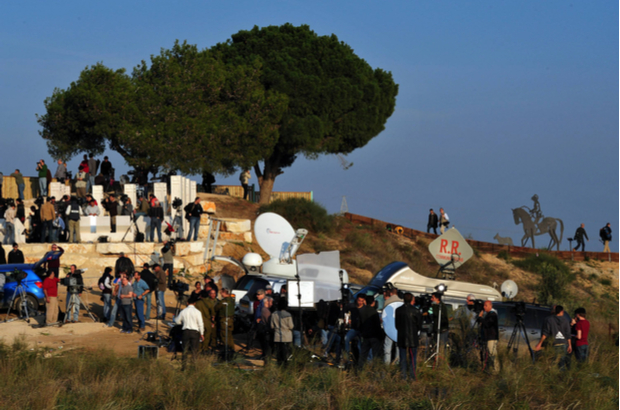 Even though freedom of expression and opinion are guaranteed under Palestinian Basic Law and also by International Laws and Conventions, violating this right has become a familiar occurrence in everyday Gaza.

Those who work in the journalism sector and media activists are deprived of their lawful rights to express their opinions freely and to obtain information as a result of many restrictions imposed by Israeli occupation authorities who hack accounts of activist journalists. They are also subject to investigation and/or arrest when they pass through the Bait Hanoun terminal if they are lucky enough to obtain a permit to exit Gaza through this terminal controlled completely by the Israeli occupation.

On the other hand, journalists (both males and females) are at risk of being summoned for interview at the police stations, detained by security entities in Gaza or even going to trial as is happened with journalist Hajar Harb for reportage she published in 2016 on corruption at the “treatment abroad department” in Palestinian ministry of health in Gaza.

It seems that the space for freedom of expression and sharing opinion in Gaza is rapidly shrinking. During January 2019, human rights centres recorded 18 cases of violations against journalists in the Gaza Strip, two of which are against female journalists. Separately, the Independent Committee of Human Rights has confirmed the detention and threatening of many citizens (women included) due to sharing certain opinions on social media

In addition, some armed individuals broke into the premise of “Palestine Television” and smashed up the place and its equipment. They also damaged the premises of Palestine Voice radio station located in the same building, threatening staff members and forcing them to leave their work location.

Gaza faces a suffocating blockade imposed by Israeli occupation which affects all aspects of life. The population of the Strip also lives under the iron fist of Hamas which has been tightly controlling Gaza Strip by force of weapons since the summer of 2007. Citizens are denied their right to free expression of their opinions in public, their right to peaceful assembly to express their objections on any issue affecting their lives or adding to their burdens.

The suffering of women doubles in this reality of basic rights and freedoms violations as women are more vulnerable and more exposed in community and are considered to be the weak link in the family in case they are pursued because of their activity or publishing their opinions on social media – which are widely used in Palestine in general.

Women and girls in Gaza Strip are generally exposed to a mixture of explicit threats and other imperceptible threats that force them to stay in the shadows and to refrain from sharing their political opinions or even their personal opinions about their feelings and viewpoints on private and public matters.

Many women were even forced to leave the Strip temporarily or permanently to escape the direct oppression and indirect threats and restrictions they face.

We see many young women using the cover of nicknames and borrowed titles on social media platforms and they put profile pictures of women or celebrities they get online. They use these accounts as their entry point to the social media world without the risk of their real identities being recognized for fear of harassment of family members, relatives or the surrounding environment of university or work.

In line with imposing more restrictions on media freedoms in Gaza, the government media office or ministry of media controlled by Hamas has, since the summer of 2007, issued a circular at the beginning of each month announcing that no female or male journalist is permitted to do any interviews or any media work within ministries and governmental institutions in Gaza without having a journalist card issued by the media office of Hamas.

Human rights activists working in Gaza Strip believe that this decision came in the aftermath of the broadcasting on “Al-Najah TV channel” of a filmed report titled “Houses of the Poor” by journalist Hajar Harb broadcast on 15 December 2018 and addressing allegations of corruption in government housing projects and which created a wide and strong debate on social media.

As soon as the government media office announced this decision, a number of meetings were conducted by working media platforms including Community Media Center (CMC) to discuss the matter and agree on how to face it. Meetings were also conducted with officials at the ministry of media that ended up with cancelling the issued circular and keeping the existing procedure in place.

The President of the Palestinian Journalists’ Syndicate, Dr Tahseen Al-Astal, considered the decision of the government media office in Gaza as dangerous: a violation of the right of freedom of expression and the right of access to information, citing the fact that a female journalist was not permitted to conduct interviews in one of the government ministries of Hamas in Gaza on the 24 February 2019.

Dr Al-Astal expressed his concern that the state of Palestine’s ranking on the scale of journalism freedoms would be worse. He said, “The world looks at the extent to which political parties and governments interfere in the media freedoms and this decision will contribute to the regression of Palestine’s level on the scale of media freedoms, and it will cause its classification as not respecting the freedom of journalism.”

The case of journalist Hajar Harb is instructive. She explained, “I was suspended from work as a reporter for Al-Maseera Yemeni channel in Gaza, by Al-Manara Media Company which hosts the channel’s work in Gaza Strip claiming that my reportage titled “Houses of the Poor” broadcast on Al-Najah TV Channel would damage relations between the company and community organizations as well as Palestinian political parties.” Harb added, “The decision of my arbitrary dismissal was communicated to me in an immoral, humiliating way. It was sent to me in a WhatsApp message!”

Harb explained that Al-Manara Company is owned by persons close to the Hamas movement and that this decision could have had a political motivation. She pointed out that Hamas leader in Gaza Yehia Al-Sinwar has undertaken the protection of journalists and supported those who work in investigative reporting field. “I don’t think the aggravations are limited to assault, pursuing and calling for interviews only. Losing our jobs is also an assault which inflects more harm than any other!” Harb said.

She also noted that during the making of “Houses of the Poor”, information was intentionally hidden from her. She said, “We as investigative journalists suffer from lack of enforcement of the right to get information, and sometimes we jeopardize ourselves to get it. The decision of the governmental media office is one of the obstacles we face which limits our access to information.”

Journalist Hajar Harb added, “I can’t foresee what the result of my trial will be, especially that this is my sixth time appearing before the court. All I know is that I am being punished for doing investigative reporting on an issue of interest to public opinion, as if I was a criminal who had committed a crime!”

Journalist Huda Baroud has said that as a journalist she has suffered from blocked information, as well as pressure and threats related to her work. She explained, “The recent report I published about women who were subject to rape and incest, because of which I was called for interview by security at the ministry of interior, lots of information was blocked by police administration in Gaza while I was preparing it.”

She added that while working on some cases, she used to get calls from friends of hers who were activists in political parties to convey her informal messages from formal bodies that they were not satisfied with her reporting, and in some cases these messages held implicit threats oppressing freedom of expression and opinion.

Baroud said, “On the same day that my report was published I received a call from an official in the media office of the ministry of interior who asked me to appear before them as they wished to talk to me about my report, but I refused to go.” She mentioned that she had published a report about the costs of a Hamas ceremony celebrating its latest anniversary while Hamas is late in paying its employees’ salaries in Gaza.

Baroud pointed out that journalists in Gaza Strip had no freedom of expression or opinion to address or discuss daily matters especially those about women, emphasizing that a policy of terrorizing female and male journalists with calls for interviews and pursuit like her colleague Hajar Harb and others had shrunk the space for freedom of expression and opinion and increased self-censorship by journalists.

Baroud is concerned that she might face the same fate her husband, journalist Mohammed Othaman, when he was subjected to grievances related to his journalist work. He ended up leaving the country and emigrating to South America leaving behind his family, wife and three children. She said, “Mohammed has completed several investigative reports, the most known of which was a report on the duality of legislative council work. He was called in and accused of serving external agendas among other accusations.”

She went on to say, “My husband was targeted in addition to facing a wide campaign against him, and even after he travelled some journalists in Gaza were called in and asked officially not to contact my husband abroad.” She pointed out that restrictions against journalists and depriving them of enjoying freedom of expression and opinion was the main factor behind the disintegration of her family and her husband’s emigration.

Editor’s note: In October 2018, Human Rights Watch published a report noting that the Fatah-led Palestinian Authority in the West Bank and Hamas authorities in Gaza routinely arrest and torture peaceful critics and opponents. As the Palestinian Authority-Hamas feud has deepened, each has targeted the other’s supporters. “The fact that Israel systematically violates Palestinians’ most basic rights is no reason to remain silent in the face of the systematic repression of dissent and the torture Palestinian security forces are perpetrating,” said Shawan Jabarin, executive director of the Palestinian human rights organization al-Haq and a member of the Human Rights Watch Middle East and North Africa Advisory Committee.

Link: decision of ministry of media in Gaza about issuing journalists card:

Photo above: Foreign correspondents camp out near Sderot, formerly the Palestinian village of Najd, depopulated during the 1948 Arab-Israeli War. By ChameleonsEye/Shutterstock