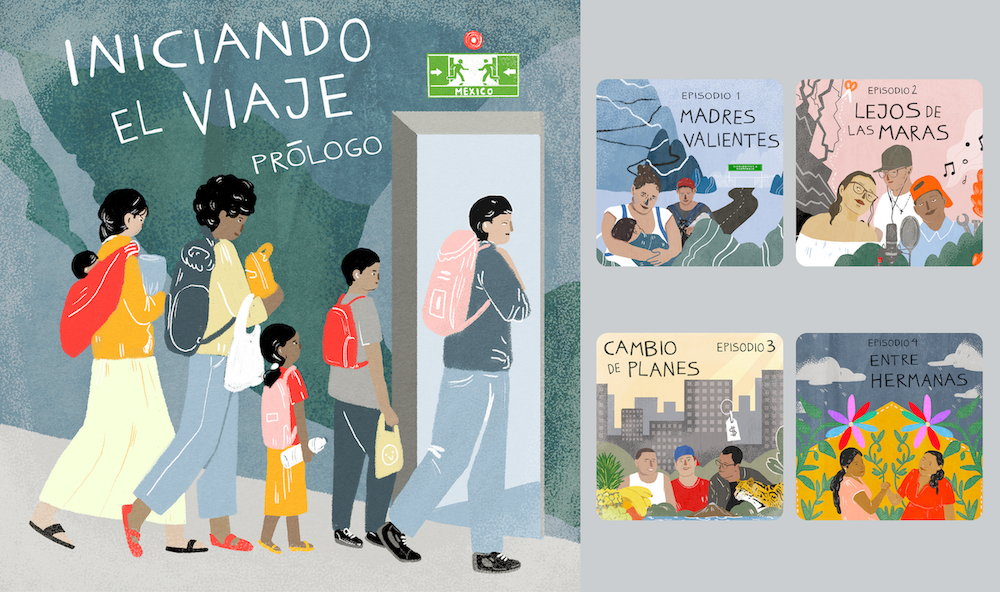 07 Jul 2021 WACC, La Sandia Digital launch podcast for and by refugees in Mexico

WACC and its partner La Sandía Digital have launched “Emergency Exits,” a new podcast about the lives and experiences of refugees and asylum seekers in Mexico.

The podcast, which features the voices and perspectives of people on the move, aims to strengthen their communication rights and to combat xenophobia. It is supported by WITNESS and narrated by Daniela Rea, from the Red de Periodistas de a Pie.

“Emergency Exits” offers a prologue and six episodes in which 15 men, women and adolescents from Guatemala, El Salvador, Honduras, Nicaragua and Venezuela, explain why they had to flee from their countries of origin and how they were received in Mexico.

These stories were produced between October 2020 and April 2021 during script workshops organized in two shelters:  the House for the reception, training and empowerment of migrant women (CAFEMIN), and the Casa Mambré, coordinated by Scalabrinianas: Mission with migrants and refugees.

The Prologue (“Beginning the trip”) of this podcast, as well as Episode 1 (“Brave Mothers”), starring three mothers who left El Salvador, Honduras and Venezuela to protect the integrity and dreams of their children, are now available on Spotify, Soundcloud, Google Podcast, Apple Podcast, iVoox, and Breaker.

“The protagonists came together to weave the stories they have in common and the paths that led them to seek a better future here, where they enrich our society with their knowledge and dreams,” La Sandia Digital explains on its website.

In these podcasts, refugees and asylum seekers “speak about their own experiences without an intermediary; they don’t answer to any journalist, they are not being interviewed, they just talk about themselves, so that they become more than a number and a report,” said Marie-Pia Rieublanc, project manager at La Sandia Digital, a Mexico City-based civil society organization focused on gender justice, environmental justice, and communication for social change.

The stories focus on what each of them brings from their home country — “from their education, their cultural heritage, their inner strengths and what they would like to provide, what dreams they have for their future in Mexico or in the United States,” said Rieublanc.

“As a result of the complex human rights and economic conditions in Central America, since 2018 thousands of people from this region have decided to leave their country and head to the United States,” explains Lorenzo Vargas, WACC Communication for Social Change project manager. “The vast majority of these migrants have to transit through Mexico, and many end up staying when they realize just how difficult it is to enter the United States.”

Vargas noted that the Mexican Commission for Refugee Aid (COMAR) received 70,302 asylum applications in 2019, 57% more than in 2018, mainly from Honduras and El Salvador. “The majority of migrants are fleeing violence, impunity and extreme poverty. A significant number of them are women and adolescents,” he said.

The podcast is part of the project, Migrant Voices: Freedom of Expression & Access to Information in Mexico.

“The skills and knowledge they will gain, particularly on their right to information and freedom of expression, will also enable them and other migrants to access vital information about services (especially related to healthcare, food and shelter, and safe migration pathways) and legal entitlements,” said Vargas. It will help them exercise other rights such as freedom of movement, right to seek asylum, right to access consular services, right to healthcare, right to justice, and to security of the person, he said. Participants also received specialized support on documenting abuses perpetrated by state authorities.