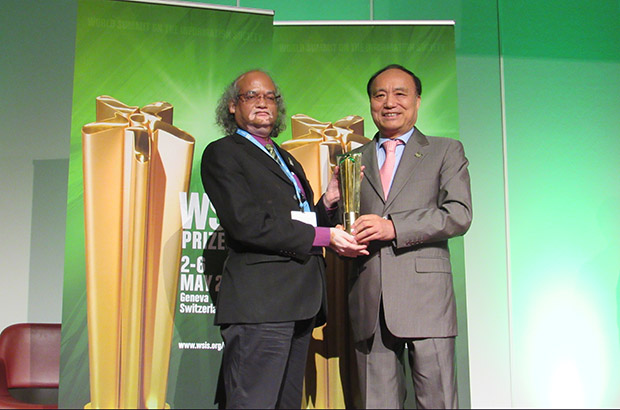 Bangladesh NGOs Network for Radio and Communication (BNNRC) has received the UN World Summit on the Information Society (WSIS) prize 2016.

The World Summit on the Information Society Forum presented the award on May 3 as part of the WSIS Forum in Geneva, Switzerland.

The WSIS forum is co-organized by ITU, UNESCO, UNCTAD, and the UNDP with the engagement of other United Nations Agencies , including WIPO, UNDESA, FAO, ILO, ITC, UNODC, UNEP,UPU, WMO, WHO, WFP, UN Women and the UN Regional Commission.

The prestigious prize was awarded in recognition to BNNRC’s successful implementation of a project on Youth Women in Community Media and Journalism –– the beginning of a new era in rural broadcasting journalism of Bangladesh supported by the Free Press Unlimited.

The WSIS competition was among the 311 projects submitted for the online voting. In addition to a total of 18 WSIS prize winners, 70 runners-up projects were also recognized as WSIS Prize 2016 Champions.

AHM Bazlur Rahman, Chief Executive Officer of BNNRC in his message said, “We are indeed honored to have received this award. All of us at BNNRC are extremely proud that our work has been given this appreciation and recognition by the international community.”

“Of course, the real winners,” he added, “are 60 youth women community radio journalists those are working with 16 community radio stations in Bangladesh for ensuring voices of the voice-less in line with poverty of voice.”

BNNRC’s project highlights the “voices of the rural people” which essentially are at the core of the rural broadcasting journalism programme especially for female journalists.

Prior to taking up their responsibilities in community radio broadcasting programmes and feature writing in local newspapers, the young women journalists, aged between 18 and 30, were exposed to customised media training to strengthen their understanding of reporting, news and script writing and editing during fellowship programmes that took place in 2013 and 2015.

They joined as producers, anchors and reporters in 16 regional community radio stations some of which are located in remote coastal islands and on river banks. The young women produced over 800 radio programmes and about 500 newspaper reports which largely focused on messages to free society from the traditional caste system, good practices in health for women and children, ending early marriage, social discrimination, violence against women, promoting education, and giving more voices to marginalized people.

Using the information technology in broadcasting, the young women journalists, the majority of whom come from dalit families or the lowest caste in the society, demonstrated how the chemistry of creating opportunities and utilizing information technology can change society – one of the most important criteria for nomination for the WSIS award.

The goal of WSIS is to achieve a common vision, desire, and commitment to build a people-centred, inclusive and development-oriented Information Society where everyone can create, access, utilize and share information. The WSIS Forum 2016 represents the world’s largest annual gathering of the ‘ICT for development’ community.