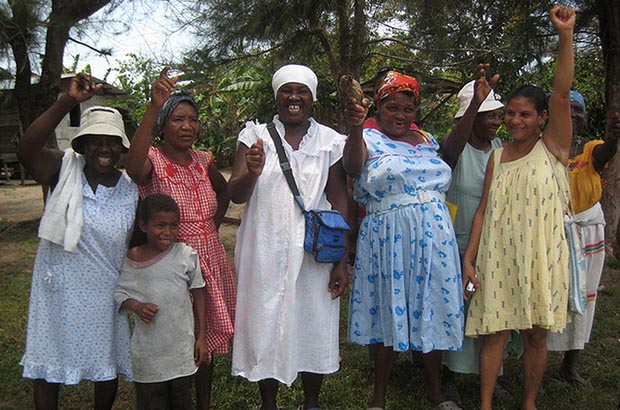 The Black Fraternal Organization of Honduras (OFRANEH) is a grassroots organization dedicated to defending the rights of Garifuna peoples in Honduras. Photo:  OFRANEH.

Development projects pushed by the government in the Atlantic coast threaten the survival of afro-descendant communities.

In Honduras, Garifuna (Afro-indigenous) radio stations have long been at the forefront of social organizing and the protection of traditional territories.

But these stations still have a lot of work to do in the area of gender equity: women are mostly absent from the management structures and the content production teams of the stations.

WACC is currently supporting a project to strengthen the technical capacity of local women to work in the stations and to enable them to manage programme content.

Now the community served by WACC’s project partner the Black Fraternal Organization of Honduras (OFRANEH) is under attack.

“The Garifuna people have suffered two displacements and they are now facing another one for living in coastal regions coveted by national and transnational capital,” explains Miriam Miranda, coordinator of OFRANEH, which defends the rights of the Garifuna communities.

The first Africans settled in the Atlantic coast of Honduras some 219 years ago after their displacement from the island of Saint Vincent where they had been taken by Europeans as slaves. They were welcomed by Carib aboriginals that inhabited that region and their descendants are known as Garifunas.

Currently the Garifuna people is made up of 40 communities that live along the Honduran Atlantic coast, or the coastal area of the Caribbean that encompasses the departments of Cortés, Atlántida, Colón and Gracias a Dios.

The Garifunas have refused to abandon these coastal lands despite the pressures they have suffered since the inception of the banana enclave in the 50s, until the coup d’état in 2009.

“The approval of laws granting the territories to transnational capital increased following the coup, with a large number of these resources located in Garifuna territories. We as Garifuna peoples not only face the problematic of touristic megaprojects, but also problems with land concessions for iron mining exploitation and dams,” Miranda said in an interview with Latinamerica Press.

Miranda is a Garifuna leader and defender of the territory who has faced death threats. In 2014, she and seven members of OFRANEH were kidnapped by heavily armed men when traveling in the Garifuna territory located in Vallecito, Colón, which is disputed by criminal groups and drug traffickers because of its strategic location as a transit point for drugs.

Today she describes cases of conflict in which the Garifuna communities suffer serious threats to their rights over their ancestral territories.

“In the area of La Ceiba, in the community of Sambo Creek, the two rivers in the area [Sambo y Cuyamel] are threatened by the installation of hydroelectric dams, and the community has been waging fierce opposition for eight years now. In the case of the communities of Cusuna and Punta Piedra, in Tela, the threat comes from iron mining; and there are dammed rivers in Trujillo Bay,” she said.

“The worst danger lies in that these concessions are being backed and managed by municipal corporations that are near the communities and that are generating discord,” she explained.

In this situation, community media play a vital role in bringing the community together to organize peaceful resistance and in alerting the authorities to what is going on. It’s called communication rights in practice.