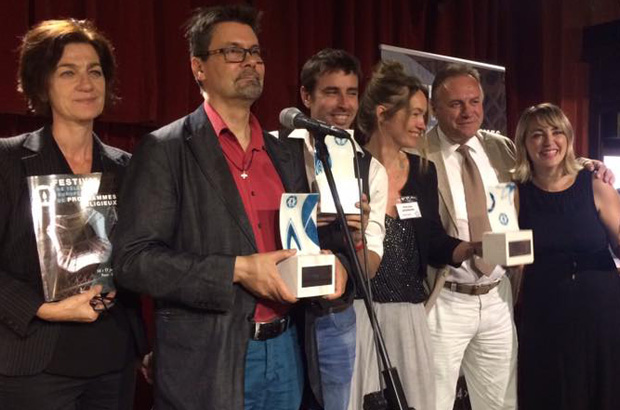 A television film dealing with how eight Dutch monks remaining in a monastery originally built for 120 decided to move to Schiermonnikoog, an island in the north of the Netherlands, has been awarded the prize of the international jury at the 19th European Television Festival of Religious Programmes in Paris.

With “well-chosen characters, it addresses universal topics: the courage of accepting and embracing change, trusting the future … and a documentary style based on emotional visuals,” said the president of the jury, Bojidar Manov (Bulgaria) announcing the prizes on 16 June at the end of the three-day festival.

Schiermonnikoog (The Island of the Monks), written and directed by Anne-Christine Girardot for the Dutch KRO-NCRV network, portrays eight monks left in the Sion monastery as they contemplate that their community may cease to exist. They instead decide to move to Schiermonnikoog, whose name means Island of the Grey Monks. More than 500 years ago, before the Reformation, novices worked on the island in their grey habits, but the eight monks are confronted by turmoil, doubts and fear as they leave their long-established community for a new future.

The television festival is organised by the European sections of the World Association for Christian Communication (WACC) and the World Catholic Association for Communication (SIGNIS). It has taken place about every three years since the first such festival in Monte Carlo in 1969, with the 2017 event hosted by the television service of the Protestant Federation of France (FPF) and the Roman Catholic CFRT (Comité Français de Radio-Télévision), which produce religious programming for the main France 2 channel of French public broadcaster France Télévisions. Altogether 29 television programmes were selected for the festival.

At a reception at the headquarters of France Télévisions on the opening evening, 14 June, the executive director of France 2, Caroline Got, outlined the way in which the broadcaster transmits programmes reflecting the main religious traditions in France. The French policy of secular laïctité does not mean the negation of religion, she said, but respect for all religions. Responding, FPF President François Clavairoly described religion as “a source and a resource – intelligent, symbolic, civilizational and foundational – that helps us to live together in society. Religious programmes therefore concern and affect the whole of society.”

The festival prize for innovation went to the Finnish Broadcasting Company and the communication centre of the Evangelical Lutheran Church of Finland for a four-minute programme Pisara (Droplet).  The programme portrays a ceramic artist, Elisa Isoniemi, in one of a series presenting portraits of people who select a Bible passage and explain why this text is important to them – “an innovative way to communicate an image of God,” according to the jury, ”and powerful in its short form.”

A special mention went to the documentary Un autre chemin (Another Path), which portrays a US mother, Agnes, whose daughter and grandson have been killed by the daughter’s ex-boyfriend Leonard, now serving life imprisonment in a Florida prison. The documentary, by Chloé Henry-Biabaud and Isabelle Vayron de La Moureyre, made for Présence Protestante of the FPF television service, recounts how Agnes starts writing to Leonard, the beginning of a long correspondence in which Agnes and Leonard finally become committed to a vision of restorative justice.

“This film brings up two of the most important values of our broken society, reconciliation and restorative justice,” the jury said in its decision.

The audience prize went to Ma Femme est Pasteure (My Wife’s a Pastor), a Swiss web comedy series about an agnostic husband trying to get to grips with his wife who has become a Protestant pastor – played by Victor and Carolina Costa, who are, in real life, an actor and a pastor.

Alongside Bojidar Manov, the jury was made up of Praxedis Bouwman (Netherlands), Théo Péporté (Luxembourg), Florin-Ioan Silaghi (Romania) and Meelis Süld (Estonia).

Stephen Brown is president of WACC Europe and treasurer of WACC global.