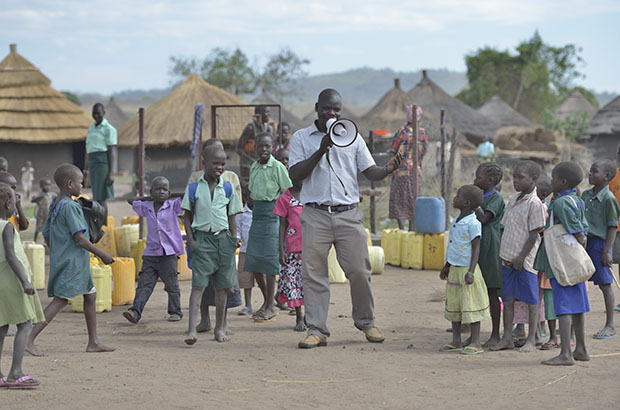 William Orach announces the availability of medical care in Nimule, South Sudan, near that country’s border with Uganda. The mobile clinic was launched in January 2014 shortly after war broke out within South Sudan. Photo: ACT/Paul Jeffrey.

Each year, WACC chooses to support various small, locally-based communications projects around the world in order to enhance what the U.N. describes as “the right to voice.”

In its report A Million Voices: The World We Want (2013), the U.N. emphasized that “the right to voice and participation is seen as contributing to people’s sense of dignity as citizens. It is the basis for a more trusting relationship with governments, which in itself is an important driver for development. The right to a voice is necessary to bring injustices to the table, and holding governments … accountable.”

However, WACC notes, many people “are denied the right to communicate because of status, location, identity, or gender” and “public communication remains largely in the hands of the privileged.” When public media do not address problems and issues affecting poor and marginalized people, their concerns remain invisible and unheard, WACC said.

New information and communication technologies are offering more opportunities than ever, upheld by new legislation in some countries that supports the development of community media. “However, poor and marginalized people are often excluded from these processes by geographical location or lack of resources and skills,” WACC said. Many groups – especially women – are also silenced by social structures and cultural traditions.

WACC tries to help by supporting small projects that take a rights-based approach to communication as part of a strategy to address other development challenges. It does so in the firm belief that only if communication is participatory can it empower individuals and communities, challenge unequal political, economic and cultural structures, and help to build a more just and peaceful world.

Among this year’s small projects:

Zimbabwe, Chitungwiza Community Development Network. This project will create a mobile website and a mobile application for news and information sharing, build the capacities of 30 trainers of trainers and provide 30 individuals with citizen journalism skills.

Philippines, Communication Foundation for Asia. This project aims to equip people and communities with citizen journalism skills. They and their extended groupings will be provided with a dedicated server and their own online newspaper.

Nepal, Asmita Women’s Publishing House and Resource Organization. In Nepal, violence against women is a pressing issue. Media can play a vital role in addressing this crime and in lobbying for effective laws. This project will examine news reports, lobby for policy change, address the discourse that legitimizes violence against women, the lack of real knowledge by journalists, and media propaganda on violence.

Argentina, Asociación Crisol Proyectos Sociales. Based on monitoring the main national daily newspapers, this project will identify how young poor people are represented. It aims to contribute to changing the prejudicial associations between this social group and different forms of violence present in the mass media.

Honduras, Fraternal Black Honduran Organization. In Honduras, Garifuna (Afro-indigenous) radio stations are at the forefront of social organizing and the protection of traditional territories. However, women are mostly absent from management structures and content production teams. This project will begin to address these issues by building the technical capacity of local women to participate in the stations, helping radio stations develop gender strategies and supporting women who are already working with the stations.

Click on this link for the complete list: Helping to build a more just and peaceful world.