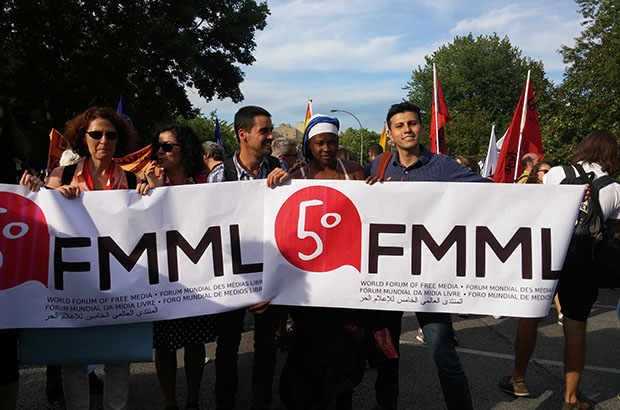 The 5th World Forum on Free Media (FMML, Forum Mondial de Medias Libres) is currently being held in Montreal, August 7-14. The FMML is a global gathering of citizen and independent journalists, community media practitioners, free software developers, and communication rights activists that work for the democratization of media and communication. The FMML draws on the principles of the World Charter of Free Media, adopted by the 4th FMML in Tunis in 2015.

The programme of the FMML has focused on a wide range of topics related to communication rights, such as community-owned communication infrastructure, internet governance, free software, indigenous rights, attacks against freedom of expression, media literacy, community and citizen’s media. All these areas are being examined from a perspective that recognizes that digital technologies create both challenges and opportunities for the exercise of communication rights.

WACC has had a strong presence at this years’ FMML, with a delegation made up of representatives from 4 project partners from Latin America and 2 members of staff: Programme Manager Lorenzo Vargas and General Secretary Rev. Karin Achtelstetter.

Lucia Lagunes Huerta, from WACC project partner CIMAC in Mexico, was one of the presenters on a panel entitled “Whose Security: The criminalization and impact of social and state violence on freedom of expression”. Lagunes Huerta examined current human rights challenges in Mexico from a perspective of gender justice and freedom of expression, and emphasized the need for journalists to form support networks that enable them to challenge discourses that normalize violence, particularly violence against women.

Alex Meza Vasquez, from WACC project partner CHIRAPAQ in Peru, was one of the presenters on a panel entitled “Citizen’s Challenges and Concerns about Media”. Meza Vasquez shared key insights from his organization’s work in the area of indigenous rights and communication, and highlighted the role that community radio plays in preserving culture and building networks of community support. 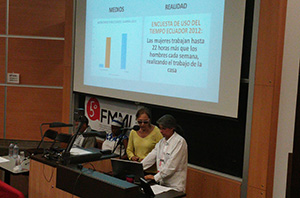 Lopez Astudillo’s presentation focused on key findings of media monitoring conducted by GAMMA on the representation of women’s participation in the economy. For Lopez Astudillo, working with and through media for gender justice is crucial to help new social relations based on respect for human rights.

Ester Garcia Sanchez, from WACC project partner OFRANEH in Honduras, was also a presenter on the panel on “The Role of Free Media in Impacting Social Policy and Media Practices”. Garcia Sanchez shared a brief history of her people, the Garifuna communities on the Caribbean coast of Honduras, and explored the ways in which community radio supports their struggle for land rights and cultural survival. For Garcia Sanchez, community radio represents a vital source of information and mechanism of social organization for her community.

As a result of WACC’s strong participation in this year’s FMML, WACC has been invited by the FMML organizers to participate in discussions about the future of the FMML and way to increase the impact of the Forum. This will be a new opportunity for WACC to continue to promote communication rights as vital elements of sustainable development and social change.

The FMML is one of the many parallel forums of the 12th edition of the World Social Forum, being held in Montreal between the 9th and 14th of August, 2016. The World Social Forum is a space for activists, artists, citizens, and civil society groups from around the world to gather to discuss and exchange ideas on social, economic, and political alternatives to neoliberalism, the dominance of capital, imperialism, and the destruction of the environment. The 2016 World Social Forum marks the first time the event is held in the so-called “global north”. 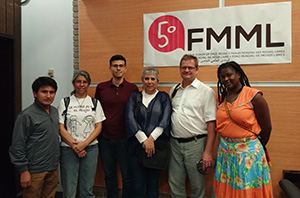 This year’s World Social Forum is organized into 13 themes; the World Forum on Free Media falls under Theme # 2 – Democratization of Knowledge and Right to Communication.

Some of the panels featuring WACC project partners were attended by Bread for the World (Germany) staff  Oliver Märtin, Head of Europe and Worldwide Programmes, and Ms. Angela Kircherr, Project Officer. Bread for the World is a partner organization of WACC and one of the funders of the World Social Forum 2016. (Photo left: from left to right Alex Meza Vasquez (CHIRAPAQ), Sandra Lopez Astudillo (GAMMA), Lorenzo Vargas (WACC), Lucia Lagunes Huerta (CIMAC), Oliver Martin (Bread for the World), and Ester Garcia Sanchez (OFRANEH). Photo Credit: WACC.)

The WACC delegation and Bread for the World staff also had an opportunity to meet with WACC Asia President and WACC Global Board Director Ramon Bultron (Asia Pacific Mission for Migrants) and with Tetet Nera-Lauron from WACC member (IBON International) in the Philippines during a WACC-organized dinner for partners and members.

WACC thanks all its partners for their participation in the 5th FMML.