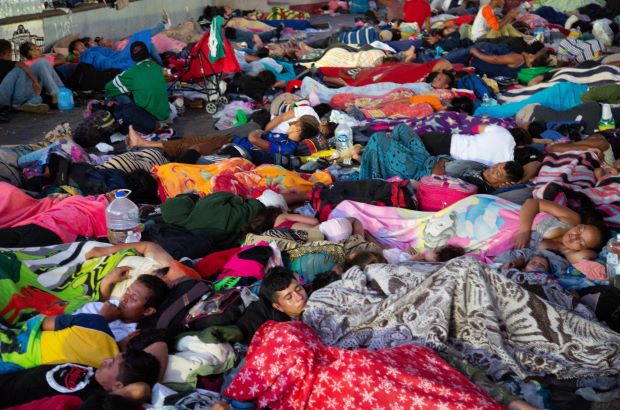 The ACT Alliance in North America and Central America have issued a joint regional appeal to help undocumented migrants affected by U.S. President Trump’s immigration policies, which have included the separation of children from their families and detention in facilities described as appalling and inhumane.

The appeal will support work being done by ACT members in Central America, Mexico, Canada and the United States, said ACT Alliance in a news release.

WACC –  which has also been responding to migration issues in Latin America, Europe and Asia – is a member of the ACT Alliance. WACC is working for more balanced coverage of migrants and refugees in the news media.

ACT members “seek to guarantee the safety and physical integrity of migrants, especially minors, the elderly and women, and to prevent people from being deceived by international criminal organisations engaged in migrant smuggling,” said ACT Alliance.
The appeal will also help to advocate for legislation and policies compelling governments to abide by their human rights obligations to refugees and migrants, it added.

ACT members are expected to collect data about human rights violations, which are “crucial for influencing a rights-based implementation of the Global Compacts for Migration and on Refugees in Central America and Mexico,” said the news release.

ACT Alliance noted the action that many churches in North America have taken in response to immigration issues. On August 7, the Evangelical Lutheran Church in America (ELCA), a member of the ACT Alliance, became the first denomination to declare itself a sanctuary church.

“With this ground-breaking decision, ELCA pledged to provide shelter to undocumented immigrants and protect them from unnecessary jailing and deportation,” ACT Alliance noted. “Christians have offered sanctuary for two thousand years, continuing an ancient biblical practice in which cities and houses of worship provided refuge and asylum for people fleeing injustice,” said Christopher Vergara, who works on immigration issues in the church’s New York Synod. “…Today, the New Sanctuary Movement is a revived effort to protect undocumented migrants from needless jailing procedures and deportation, and to address the dire situation within the Department of Health and Human Services that has resulted in the stripping of services to refugees and unaccompanied children.”

Meanwhile, ACT Alliance members in Canada have expressed solidarity for churches in the U.S. that are challenging Trump’s immigration policies.

“Canada and the United States share a long tradition of welcoming men, women and children who are seeking refuge from persecution and conflict,” they said in a letter sent to Trump. “Welcoming refugees through resettlement reflects a shared global responsibility in the face of the worst global forced displacement crisis since World War II.”

There are now 70.8 million people who have been forced to flee their home because of war, conflict and persecution, according to the UN High Commissioner for Refugees.

There are now an unprecedented 70.8 million people forced to flee their home because of war, persecution and conflict, according to the UN High Commissioner for Refugees (UNHCR).

“While working for the peaceful resolutions of these crisis, we have a moral responsibility to act today and protect those who seek refuge and safety for their families,” said ACT Alliance.

Photo above: Migrants from Guatemala sleep in the main square of Tapachula, Chiapas, after crossing through southern Mexico, where they hope to join other Central American migrants bound for the U.S.  Responding to pressures from the Trump administration, Mexico has deployed thousands of troops to stop migrants, who say they are fleeing violence and poverty. By Sean Hawkey/ACT Alliance