Posted at 12:29h in Media Development by wacc_kn 0 Comments

On August 11, 1973, a party in the recreation room at 1520 Sedgwick Avenue in the South Bronx became the unlikely birthplace of a movement; hip hop. Forty years removed from its genesis, hip hop remains vibrant, influencing everything from linguistics and politics to music and fashion. To fully understand hip hop – and its historical and present-day contributions – it is important to note the context that shaped it and that ultimately catapulted it internationally.

On April 4, 1968, the Rev. Dr. Martin Luther King, Jr. was assassinated in Memphis, Tennessee. Widely regarded as the American Civil Rights Movement’s greatest leader and most prominent voice for social change, King’s death marked the end of the American Civil Rights era. King’s death also marked the beginning of the decline of the historic African American church, fuelled by a growing disillusionment with the church to effectuate still needed changes and equality for African Americans. “An earlier concern for social justice seemed lost to a new sense of individual pietism that promised heaven but did little to change the existential situation of black Americans.”2 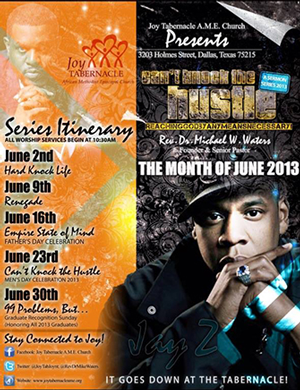 As the historic African American church continued its decline in the 1970s, no other place in America reflected the post-civil rights era despair as the New York City Borough the South Bronx. “The Bronx, particularly its southernmost section… had a gang problem, a heroin problem, and like the other outlying boroughs, no industrial base on which to rebuild.”4 From the bleak despair of joblessness, violence, drugs, and burned out buildings arose a new hope, a new culture that would change the world. “Behind the decay and neglect [the Bronx] was a cauldron of vibrant, unnoticed, and quite visionary creativity born of its racial mix and its relative isolation. It was within its boundaries that the expressions we associate with hip hop – graffiti art, break-dancing, MCing, and mixing – all have roots.”5

Hip hop is a child of the South Bronx, itself a cauldron of many cultural expressions. “At its most elemental level hip hop is a product of post-civil rights era America, a set of cultural forms originally nurtured by African-American, Caribbean-American, and Latin American youth in and around New York in the 70’s.”6

For years, mainstream culture considered hip hop to be a passing youth fad. Yet, “Hip hop has outlived all its detractors and even surprised most ardent early supporters by always changing, and with each change, expanding its audience. It has outgunned punk, post-punk, New Wave, Rave, House, techno, and every other much-hyped musical form of the age.”7

Much of hip hop’s staying power can be attributed to its essential voice for a generation in peril. “Hip hop…chronicles a generation coming of age at a moment of extreme racial confusion – in these years since official apartheid was legislated out of existence and de facto segregation grew – who have been grappling with what equality means during the worst economic conditions for the underclass since the Depression. Hip Hop is…a product of a schizophrenic, post-civil rights movement America.”8 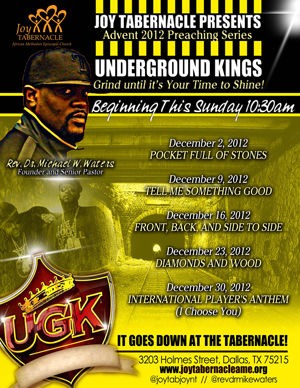 Hip hop has made its mark, remaining an indelible part, not just American culture, but of global culture as well. It can no longer be regulated as an urban American subculture. “Hip hop…as a whole, has utterly broken through from its ghetto roots to assert a lasting influence on…clothing, magazine publishing, television, language, sexuality, and social policy as well as its obvious presence in records and movies.”9

Hip hop has been defined in a multiplicity of ways, still several key elements provide for a clearer definition of what hip hop is. “Most participants and observers identify five key elements to hip hop: Djing, MCing, dancing (break and step), graffiti, and cultural style (ranging from clothing and hairstyle to magazines and literature). A sixth can be identified as ‘beat-boxing’, a form of expression in which a sole performer uses voice and body to make the sounds of scratching (as if on a vinyl record), drums, even stereo sounds and music.”10

Legendary hip hop artist Kurtis Blow adds a seventh key element of hip hop; love and understanding or personal spirituality. Hip hop in this regard is about “the way you live your life, the ‘way you live your Hip Hop!’”11

Out of a context of despair, hip hop emerged as a beacon of hope giving voice to communities at the margins and illuminating the challenges experienced by urban youth too often ignored. The rapper, or MC, emerged as the primary voice and storyteller in hip hop. Their lyrics created a canon for the culture. In the tradition of the Old Testament prophets, many rappers give vivid depictions of the struggles of daily life. Rappers have emerged as prophets, offering laments on behalf of their communities, and giving voice to the pain and suffering of a generation.
Given its historical context, unlike other primarily African American cultural forms, hip hop does not find its origins within the historic African American church, but upon the hardened streets of urban America. Hence, hip hop’s spirituality is not directly informed by the Christian African American religious experience, such that “the pulpit lost influence with young blacks and was replaced by street commentator voices… [that] fuelled the rise of hip-hop culture – rappers…who today have greater influence over black youth than preachers do.12

As with all movements, hip hop has experienced critical challenges. Concerning certain subcultures within hip hop, these challenges have included the glorification of misogyny, violence, drug use, and materialism. Certain subcultures of hip hop are particularly disturbing related to the objectification of women, “rap songs referring to Black women as bitches, gold diggers, hos, hoodrats, chickenheads, pigeons, and so on…with rump shaking, scantily clad young Black women as stage props for rap artists.”13 This is problematic in that it denies Black women their authentic identity as being created in the image of God. Yet, these ills are not merely reflective of hip hop alone, but of American culture at large.

In the face of these notable challenges, hip hop can be credited with several achievements emergent from its hope-filled origins. A transcendent culture, “[The] American Anthropological Association…agreed that burgeoning hip hop communities existed in Japan, Europe, South Africa, and South America.”14 Neither culture, ethnicity, class, language, nor religion serves as a hindrance to the transmission of the culture. Hip hop forms authentic community within societies, making people feel as though they, and what they have experienced, matters. “Hip-hop brings the hope back. Even if it offers no change, it at least gives confirmation that your situation is recognized and identified.”15

Hip hop offers a place of belonging where people are welcomed and encouraged to be their authentic selves. “Being connected means that you count…Hip-hop does that – it creates within itself a vibe where people can count and thus belong.”16 This need for a place of belonging is a universal need, shared amongst the human family. This sense of belonging cannot be underestimated, especially when giving consideration to the needs of people living at the margins of society. “When belonging is a prevailing need, you will find a place or even create a place where you belong. Thus hip hop culture.”17

Creating and nurturing diversity is an achievement of hip hop. “The hip hop generation is not a monolithic group. Hip hop is diverse.”18 The diversity offers great hope for the future of the world community. “Hip-hop attracts a holistic diversity, as it infuses all socioeconomic groups and puts them on equal ground… hip-hop brings together people from all walks of life.”19

My church, the five year-old Joy Tabernacle African Methodist Episcopal Church in Dallas, Texas, is the fastest-growing A.M.E. Church in the State. We identify ourselves as a church that takes theological reflection and dialogue with contemporary culture seriously as a means of being transformed and of being made more relevant to the end of effectively forming community with post-civil rights era generations. Our church is a part of the historic African American church, and we recognize several truths related to this association:

“The [historic African American] church has been the most enduring organic institution created by Africans on the soil of North America. The church has nurtured our freedom movements and been the birthplace of our greatest cultural creations: the spirituals, jazz, blues, gospel, R&B, and neo-soul. All have a connection to the faith community we call church. The one cultural creation not tied directly to the church is the newest child in African American culture: hip hop.”20

Given the fact that newer generations of African Americans have come of age largely outside of the context and nurture of the historic African American church, we believe that Joy Tabernacle can more effectively form community with these generations of African American through our faithful engagement with hip hop. As such, our worship experience has such added dimensions as a DJ who plays tracks and scratches during worship and, on occasion, hip hop artists who rap or deliver spoken word during our services. I regularly preach sermon series that engage the hip hop lyrical canon as a theological conversation partner. 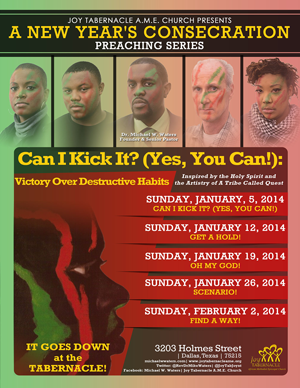 On countless occasions, members and visitors have approached me following our services to say they had not felt welcomed or at home in church in a long time, and that they had absented themselves from worship for many years. However, my sermon affirmed for them that there was a place for them to belong in the church, and that they felt that Joy Tabernacle took them and their unique life experiences seriously. “Hip Hop explores a basic theology of life,”21 and in doing, welcomes everyone to the table.

From its humble beginnings in the South Bronx to the international stage, and now, even into sacred spaces, hip hop continues to evolve. May we never lose sight of hip hop’s hope-filled origins, or of its benefits to forming and supporting diverse communities.

And may we always endeavour to listen to hip hop’s voices from the margins, and then faithfully counter the systems that keep them there!

The posters on pages 5, 6 and 8 were created by Sir Adrian Jones of CEO of Sir Jones Productions, LLC.

Michael W. Waters is founding pastor of Joy Tabernacle African Methodist Episcopal Church in Dallas, Texas, one of the newest and fastest-growing A.M.E. churches in the state. As pastor, preacher, professor, author, motivational speaker, and community organizer, Waters’ words of hope and empowerment have inspired national and international audiences. Based on his blogs for the Huffington Post, he published the book FREESYLE in February 2014. In his book Michael Waters speaks about relevant current events out of the perspective of a member of the hip-hop generation. 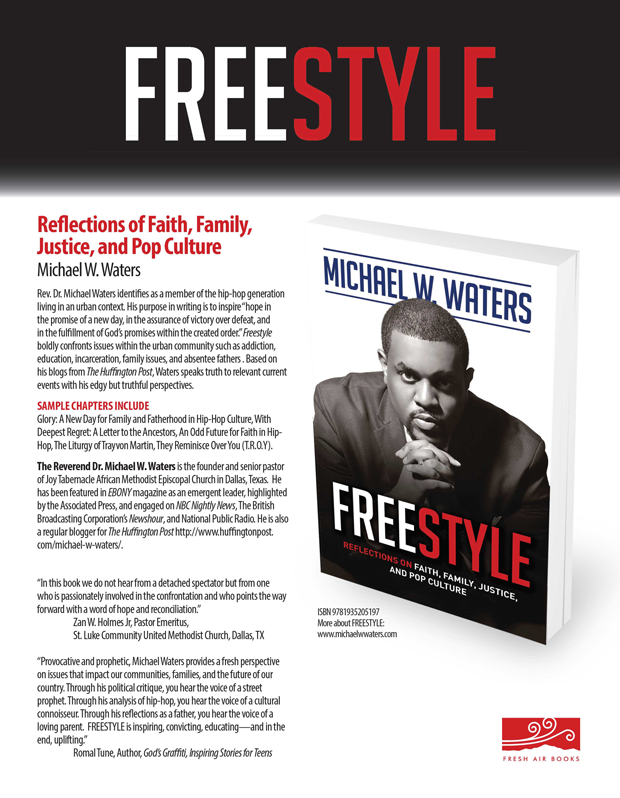