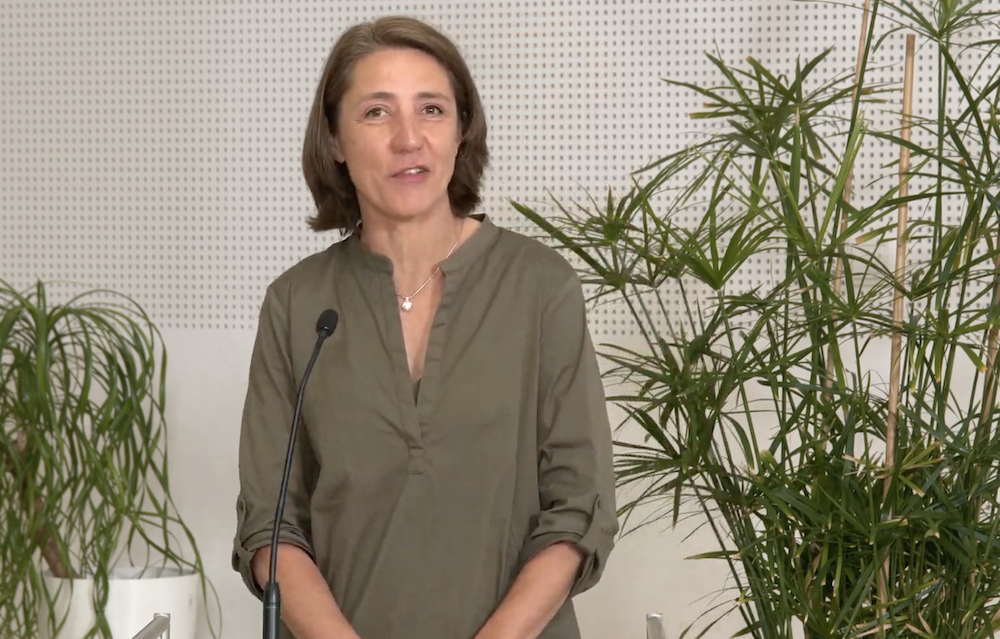 Saying that it is not only social coherence but “human dignity itself” that is at stake, Dr. Ellen Ueberschär, President of the Heinrich Böll Foundation, urged civil society organizations, faith-based communities, and NGOs to “take up the fight for freedom and dignity” in both digital and offline spheres.

“The forces of democracy and public welfare must stand together in the fight to build credibility and trust in the digital media world,” stressed Ueberschär. “Civil society, churches included, have to be involved in finding what it means to have privacy, self determination, security and ensure equality and justice in the digital space.”

Digital participation “is not a luxury or merely nice to have, but a prerequisite for the development of inclusive societies. Free access to information and unhindered opportunities to disseminate it form the backbone of democratic, open, and prosperous societies,” she said.

While the pandemic has demonstrated the advantages of digital communication, including the ability to celebrate services online, work from home and stay in touch with family, it has also given governments the ability to install new surveillance apps in the guise of combatting Covid-19, said Ueberschär. Social media, she added, has also amplified “ubiquitous disinformation and fake news,” and what the World Health Organization has called an “infodemic,” (an overabundance of information, some of which are false and meant to undermine public health response).

Tech giants and digital companies have seen their financial indices rise as a result of these new technologies, “whereas democracy indices marked a decline in media independence and ability to function,” she said.

While freedom and civil rights are protected in most democratic institutions, said Ueberschär, most people are unaware that these same rights “must also apply in the digital sphere.”

Churches, she underscored, can contribute a lot to raising awareness about communication rights in the digital sphere.

She cited American author and social psychologist Shoshanna Zuboff’s analysis of the digital era in her book,  The Age of Surveillance Capitalism,  which explores how global tech companies like Facebook and Google have mined people’s personal data “not only to predict our behaviour but also to influence and modify it; and how this has disastrous consequences for democracy and freedom.”

Non-democratic governments have also “moved beyond merely suppressing online discourse and are shifting toward proactively subverting and coopting social media for their own purposes,” she said. Social media are being weaponized “to undermine the opposition, to shape the contours of public discussion, and to cheaply gather information about falsified public preferences,” she said.

Ueberschär cited the example of “hybrid regimes” like Russia, which do not directly block websites or deny access to digital platforms, but instead conduct counter-information campaigns meant to discredit and destroy their opponents. “These include techniques like mobilizing regime supporters to disrupt planned rallies, plant false information, monitor opposition websites, and harass opposition members,” she said.

“We have to bear that in mind: Social media is no safe space for human rights or environmental activists,” she said.

Still, she added, there’s still some hope as a growing consensus emerges “on the urgency of regulating intermediaries with regard to the democratic sphere and their influence on opinion-forming processes in society.”

On the issue of discrimination, Ueberschär noted the algorithm-based selection processes’ potential for discrimination in areas such as jobs, schools, legal decisions, and creditworthiness.

Ueberschär underscored the importance of working for digital justice., “It is remarkable that within WACC communication was defined very early as a human right: a radical idea whose actual implementation and enforcement – as I see it – is yet to be realized, but which will be of central importance in the dawning age of digital communication in the 21st century.”

Having access to digital platforms is not enough, she added. “We must succeed in establishing ground rules for communication in the digital public sphere that enable minorities and vulnerable groups to exchange views and make themselves heard. The same goes for mechanisms to counter fake news and prioritize true empathy over quick emotions and a culture of indignation that quickly descends into violence.”

Ueberschär identified some ideas for achieving “just digitisation,” including global regulations to restrict the influence of internet platforms, and data protection on a global scale.

“Data protection is less about protecting data, but more about protecting the dignity of human beings,” she said. This includes “controlling mechanisms for the export of surveillance software,” creating an “Alliance for techno-democracies” that shares resources on “critical digital infrastructure that might be more independent,” and transparency of algorithms, among other things.

Digital and political education are also critical, she said. “Knowledge of one’s own rights in the digital space must be strengthened, because awareness of rights violations and knowledge of dangers protect civil liberties.”

Citizens must be involved in political decision-making and there must be a broad public debate in areas as security and freedom on the Internet, personal privacy, and freedom of expression.

“These debates, as conflictual as they may be, raise awareness of individual fundamental rights in the digitalized world. It has been proven that sustained and meaningful political participation strengthens democracy,” she said.

“Fundamental rights will not prevail on their own or through voluntary commitments by corporations. That is why the broad support and joint commitment of (civil) society and churches included, politics, science and business is needed to guarantee and protect civil rights in the digital age as well, to make the digital space usable for the common good,” said Ueberschär.