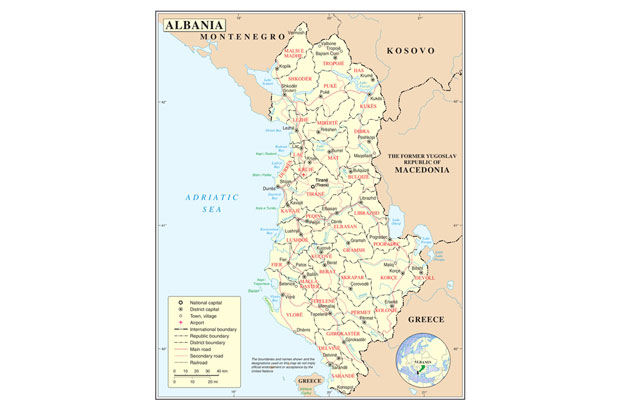 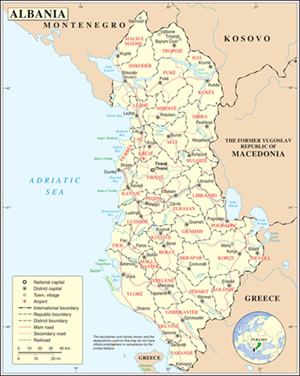 According to the Universal Declaration of Human Rights, freedom of expression is the right of every individual to hold opinions without interferences and to seek, receive and impart information and ideas through any media and regardless of any barriers.1 In practice, freedom of expression is often restricted through tactics that include censorship, restrictive press legislation, and harassment of journalists, bloggers and all others who voice their opinions.2

In Albania, the leading legislative document pertaining to freedom of expression is Article 22 of the Albanian Constitution. It guarantees freedom of speech and freedom of the press, radio and television and considers them a part of fundamental human rights and freedom.3 The Constitution also guarantees the freedom and right to information about the activity of state institutions and about persons exercising public functions.4

Despite being enshrined in the Constitution, freedom of speech is heavily politicized. Newspapers often reflect political tendencies of “including who they support” and the party holding the political majority controls the public broadcasters.5 The U.S Department of State wrote in April 2018 that pressures from political affiliations and large corporations, namely self-censorship and harassment, are some of the most significant human rights issues in Albania.6

The beginning of traditional Albanian media can be traced back to the end of communist rule in the country. Beginning in 1990-1991, as Albania was transitioning from communism to democracy, the country slowly began expanding its media landscape, as evidenced by the increase of newspapers, magazines and TV stations.7 Though the expansion brought about a greater number of news sources, the growth of media in Albania, from the very beginning, was a result of political groups producing “free-media” in a post communist country as a way to maintain their respective power.8 As a result, the emerging model of a free press in Albania was one of journalism exclusively dictated by the approved views of the party in power.

In 1994, journalists began appearing as actors in the media and made an effort to detach the media from political parties, but the task was made difficult as the concept of “freedom of the press” was mainly confined to “freedom of political debate”, serving to restrict the media landscape to a tool of political representation. In 1998, large corporate interests began infiltrating Albanian media.

Investment in television stations and newspapers became a way to strengthen the interests of corporations, where today 90% of the news is controlled by four families owning all of the top media companies.9 The top four are owned by Dritan Hoxha; Klan Group, owned by Aleksander Frangaj; Panrama Group, owned by Irfan Hysenbellio; and Media Vizion, owned by the Dulaku brothers.10

Today, the interests of political parties and large corporations has led to a diversified media landscape consisting of 20 daily newspapers, 71 radio stations, 70 television stations.11 With the rise of the Internet and the expansion of news sources, the opportunities for disseminating news seems promising. But the control of the media by these four large companies shows that overtime, business owners have become such important media owners while also maintaining close relationships with politicians and other high officials of the country.

The control of the media by political and corporate interests is not only detrimental in that it exacerbates the issue of who can control what can be said, but it also makes the work of journalists difficult, who often have to choose between reporting in favour of large corporations and political affiliations or reporting on events that run counter to their interests. The Media Institute Albania, an instrumental civil society actor in promoting media and journalistic rights, noted that:

“It seems impossible to find owners who don’t exert influence on the media in the name of their private interests. Media leaders… continually adjust editorial policies and news content to serve their economic and political interests”.12

According to a 2015 report by the Balkan Investigative Journalism network (BIRN) Albania, media professionals in Albania act under strong pressures from public institutions, through state-sponsored advertising, from big advertisers and also from owners’ economic interests and political links.13 In doing so, media and information become reduced to private property rather than a publicly shared asset, which over time has severely undermined the ability of civil society to receive objective reporting.

Not only are the pressures from self-censorship high due to elitist interests, but they are also caused by the nature of insecure work Albanian journalists face. Ninety percent do not have contracts according to a 2014 study conducted by the European Parliament on media in the Western Balkans and up to 70% have worked unpaid or faced delayed salary payments.14 The head of the Albanian Journalists’ Union, Aleksander Cipa, considers employment contracts a trap for journalists, stating:

“These contracts are often unilateral and are often imposed… they are formulated in such a manner that they often have no legal value… [where] media bosses in most cases do not give journalists a copy of the contract”.15

Because of these kinds of pressure, investigative journalism, where reporters deeply investigate a single topic, is quite rare for fear of publishing content contrary to political or corporate interests. Many journalists adapt to the owners’ interests and implement their agendas, often self-censoring their work. They often resort to these practices to avoid violence and harassment and as a response to pressure from publishers and editors seeking to advance their own political and economic interests. For those reporters who do decide to speak out, the consequences are often grave, such as for Elvi Fundo.

A respected Albanian journalist who specializes in covering corruption, he was badly beaten by two men in Tirana Square in May 2017. Reporters Without Borders (RSF) wrote about the attack on Fundo and found that he had recently investigated the funding of several media outlets including Ora News TV, a privately owned news channel.16 Fundo declared to Balkan Insight, the news portal of Balkan Investigative Reporting Network, “I don’t believe it’s a political attack but the work of criminals financed by corrupt media clans tied to drug trafficking”, suspecting that the incident was an attempt to silence him and the information uncovered on the drug trafficking ring.17

Like Fundo, many other journalists, in fact 80%, report a negative work environment consisting of job insecurity, the pressure of self-censorship, as well as physical and verbal assaults.18 Evidenced by high staff-turnover among journalists and the frequency of cases where external forces such as the police, government, publishers and political parties interfere, it is clear that the work environment for journalists is not always easy.

Alfred Lela from Mapo Newspaper spoke of this when he said, “If you don’t have a contract, you are not as free because you always have to think: If I do this, will I fly out? So I think this has an indirect effect on the freedom of the press.”19 Similarly, Artan Rama, an investigative journalist, was barred from appearing on television after attempting to report on the precarious work conditions that left a 17-year old boy badly injured.20

Journalists often feel unable to express information that is unbiased and factual, which severely hinders Albania’s ability as a democratic society to circulate news, such as information which holds authorities and large corporation accountable for their actions. It further marks a lack of transparency and corruption in the political elite that serves the oligarchs who use the media to further their personal interests. Freedom of expression in Albania is at risk then because of the rise of self-censorship, where many journalists are opting to abandon professional ethics and are forced to work for the personal interests of executives and owners of TV channels rather than reporting objectively. While self-censorship in the short-run allows most journalists to keep their jobs and remain free from harassment, in the long-run, it severely compromises a journalist’s ability to report objectively and thus for civil society to receive crucial information on influential groups in society.

Importance of journalism training
Current legislation in Albania does little to address the issue of objective reporting. However, the Albanian Media Institute (AMI), an NGO formed in 1995 committed to communications issues, remains at the forefront of training journalists.21 This is especially important as many media outlets are unable to adopt their own formal guidelines.

AMI seeks to implement short-term programs in journalism training for students and mid-career journalists, where they are educated in the use of digital skills with the aim of improving workers’ abilities to use different forms of expression.22 AMI goes further in that it substantially engages in media policy issues such as improving media legislation, and emphasizing the importance of freedom of expression for journalists.23

AMI’s initiatives mirror those of Media Aktive Center, another organization which implemented a major project in 2013-14 called “Intensive Practice of Multimedia Journalism” where 90 students from journalism and other departments came together to form citizen journalism start-ups in the form of blogs, YouTube channels and WebRadio.24 In both cases, the projects enabled young people to become familiar with the nature of the job that takes place in radio, television and print, and urges them to use digital tools as an influential product in society.

With the massive spread of the internet and online communication, the intern creates the opportunity for political actors to enter into direct communication without the need for mediation via traditional media. In this way, they reach a younger demographic and internet users of all age groups can participate more than through traditional media. AMI and Media Aktive use a journalistic platform as an opportunity for young workers entering the field to overcome obstacles such as violence and pressure.

The situation of Albania’s media landscape and the impact on journalists’ freedom of expression is important to note when considering the consequences for Albanian democracy. Without transparency and objective reporting of those most influential in society, it becomes difficult to assess their actions and seek redress. While this human rights issue is pervasive in Albania, it also holds true for many other countries worldwide, making it a pressing issue for all concerned.

9. Reporters Without Borders, A Family Affair – The Myth of Media Pluralism in Albania Media Ownership Monitor presented by RSF and BIRN Albania, 2018

Klea Bogdani is pursuing an Hons. BA at McGill University, Montreal, Canada, studying International Development and Communications. Her passion for human rights previously led her to gain experience working with NGOs such as the Almas Jiwani Foundation and the Community Media Advocacy Centre. In 2018 she was a summer student at WACC’s General Secretariat in Toronto.