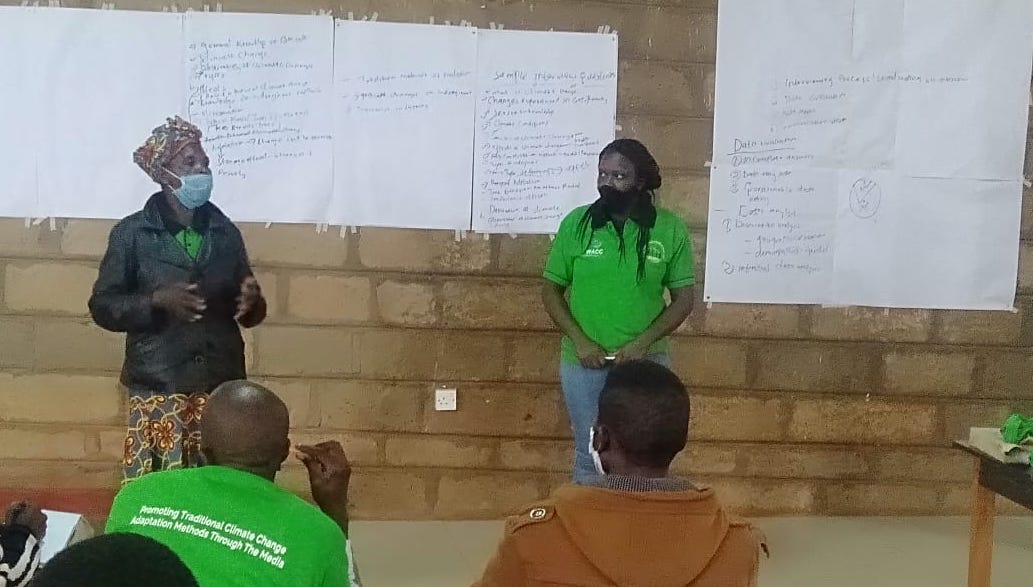 October 21, 2020 — Local radio and television stations in Kenya have been giving airtime to stories produced by the Farm Forestry Smallholder Producers Association of Kenya (FF-SPAK), which has partnered with WACC and the Food and Agriculture Organization (FAO) to support Promoting Traditional Climate Change Mitigation Methods.

As a result, it has created a lot of awareness and FF-SPAK is now discussing a possible collaboration on climate change initiatives with the Meru County government’s minister of environment and natural resources, according to a report sent to WACC by Edwin Kamau, FF-SPAK programme office.

The project, which began in February 2020, aims to promote Indigenous approaches to climate change mitigation and adaptation among farmers, and raise broader awareness about climate change among small farmers, particularly women and youth, in Meru County, central Kenya.

Promoting Climate Change Mitigation Methods through Media, a component of the project, has trained citizen journalists who are now in the process of developing stories for print and electronic media, he said. A stakeholder workshop on climate change for the Meru county is also being planned.

The stories have focused on family farmers’ best practices for adapting to the effects of climate change.

“The project is an opportunity for smallholder farmers to demonstrate that Indigenous knowledge can be used side by side with modern strategies to help reduce impacts of climate change through mitigation measures and the building of resilience among affected communities,” said the FF-SPAK in an earlier report to WACC.

“The project hopes to ‘make the case’ for including family farmers as key agents in climate change mitigation and adaptation by providing concrete evidence and case studies to policy makers,” said Lorenzo Vargas, WACC program manager on Communication for Social Change.

Ensuring a climate-resilient agriculture is particularly crucial in Kenya. Agriculture contributes 26% directly to the country’s GDP, and another 27% indirectly through linkages with other sectors, according to the  FAO. “The sector employs more than 40 per cent of the total population and more than 70 per cent of Kenya’s rural people.”

Established in 2013, the FF-SPAK is a civil society organization with 15 institutional members and about 25,000 individual members.

Photo above: Citizen journalists listen to a discussion of traditional ecological farming methods in Meru county. Courtesy of FF-SPAK