Communication rights in a post-war country are a precondition for sustainable development
20866
post-template-default,single,single-post,postid-20866,single-format-standard,theme-bridge,bridge-core-2.6.1,woocommerce-no-js,qode-page-transition-enabled,ajax_fade,page_not_loaded,,qode-title-hidden,side_area_uncovered_from_content,columns-4,qode-child-theme-ver-1.0.0,qode-theme-ver-24.6,qode-theme-bridge,qode_header_in_grid,qode-wpml-enabled,wpb-js-composer js-comp-ver-6.4.2,vc_responsive

Posted at 19:57h in Media Development by Amra Selesković 0 Comments 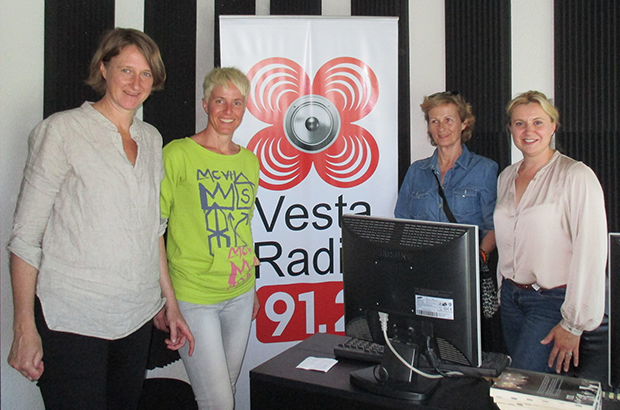 Is it possible to create an open community space so that people can freely speak and contribute to post-war reconciliation? This was the question a group of young people started to think about in community radio in Bosnia and Herzegovina in the late 1990s. At that time access to the internet was limited, but we soon discovered the AMARC community radio charter and it served as starting point for new ideas.

VestaRadio, the first non-profit community radio in Bosnia and Herzegovina, was born in 2001, after two years following an erratic application process. The regulatory body was not familiar with the idea of a third sector in communication and the role of Vesta group was to explain and convince decision-makers that something like this should exist in a country like Bosnia and Herzegovina. Finally, the committed volunteers succeeded and the first programme went on air on October 21, 2001.

The challenge to involve the community in using the new concept of radio appeared to be one of the most important in the development of VestaRadio. Before the 1992-95 war, there were only public broadcasters in Bosnia and Herzegovina, which were strongly influenced by the government. Professional radio editors and speakers were those who created public opinion and served governmental goals. Such a tradition could not create democratic and open community groups who would grab the microphone impatiently and advocate the rights of marginalized people. For VestaRadio it was obvious that communication rights were not even recognized, so their application was hardly possible.

By setting up carefully designed training opportunities for community members and the possibility of applying newly adopted knowledge and skills, VestaRadio created an army of devoted contributors, people who wanted to address specific issues in the community and to speak about them openly.

The open call for community members to join VestaRadio became standard practice. Every six months citizens, civil society organizations, students and private entrepreneurs get an opportunity to take part in training and to pick up basic information about their communication rights and ways of exercising those rights. Most of the trainees decided to apply their adopted skills and knowledge in VestaRadio by running campaigns or by informing audiences about forgotten and marginalized issues in the community.

One of them was a group of semi-blind and blind people who had a show about their daily activities and challenges. Listeners could hear and learn about the way they dealt with activities that most people take for granted such as choosing clothes, walking in the street, shopping and preparing meals.

Moreover, it was clear that this group of people organizes cultural events, writes poems, cooks together and does things that most people might consider extremely difficult or unusual for blind people. Listeners got the message that anything is possible if you really want it. Perceptions about blind people have been changed. Communication rights in practice have brought blind people closer to the community. Soon, citizens started to donate money and goods to an association of blind people with a wish to make their world better.

VestaRadio team thought how to use radio not only for awareness raising but for specific and visible changes in the community. Therefore, a new training module was developed on public advocacy. Somebody raised the question: “Should media take sides or stay neutral?” VestaRadio responded by pointing out several marginalized groups in the community that other public and private media do not recognize at all and replied with the question: “Who else provides these groups with an open channel for exercising their communication rights? Who else has no other goal but to allow people to address issues they want to address, with no interest for profit and no political agenda?”

The beginnings of a network

VestaRadio proved that was possible to run radio by the people for the people. Over the last 15 years, various campaigns were implemented by community members with specific and measurable results. Starting with a simple one, such as the installation of new traffic lights near the school to some that required additional resources such as renovation of the city park.

A major challenge for the team of VestaRadio was how to spread the idea to the whole country? When we started there were no other community radio stations to begin to create a network. Still, some public media in small communities in Bosnia and Herzegovina expressed their wish to be closer to civil society organizations and to cooperate with them. So, the network of Coordinators for the Creation and Implementation of Campaigns was established in 2006.

At that time, the network had 14 members from seven municipalities. This ensured the implementation of nationwide public campaigns. Citizens from other cities took the opportunity to approach a civil society organization, a member of the Network, and to raise a question for the campaign. The network itself had an obligation to study proposals and jointly to initiate and implement campaigns at the national level.

One of the most interesting campaigns was related to discrimination of women who had different rights related to maternity leave and allowances in Bosnia and Herzegovina depending on the area they lived in. Pregnant women and newly delivered mothers got an opportunity to speak about this problem in the media through the Network. Additional desk research about the regulation proved institutionalized discrimination, so the Network wrote a policy document and presented it through gender advocacy groups in Bosnia and Herzegovina and Parliament.

Soon afterwards, this problem became one of the most important issues at parliamentary sessions. Unfortunately, politicians and parliamentarians have not yet found any solution to the problem. However, the fact that young women in BiH communicated their concerns and raised the question in public remains one the most relevant achievements of VestaRadio and the Network.

Exercising communication rights became a regular practice in VestaRadio and people recognized the difference and advantages of being a member of non-profit community radio just by listening to the private commercial sector. By advocating for a sustainable minority return to pre-war settlements, for solving communal problems they face every day or just for a new, lighted park in the middle of the city, these active citizens accepted their own responsibility in sustainable development and used VestaRadio in order to be heard.

Over the last 15 years, VestaRadio took the side of those who are invisible, marginalized and forgotten in Bosnia and Herzegovina. It offered them an open space to practice their communication rights and help them to initiate discussions with decision-makers about the issues relevant to them and forgotten by the authorities.

VestaRadio’s communication practitioners managed to solve some of the day to day problems they face, but also to share positive thinking about the beauty of life, ongoing efforts for greater social justice, and the importance to be communicative and devoted to change.

VestaRadio is a WACC project partner.