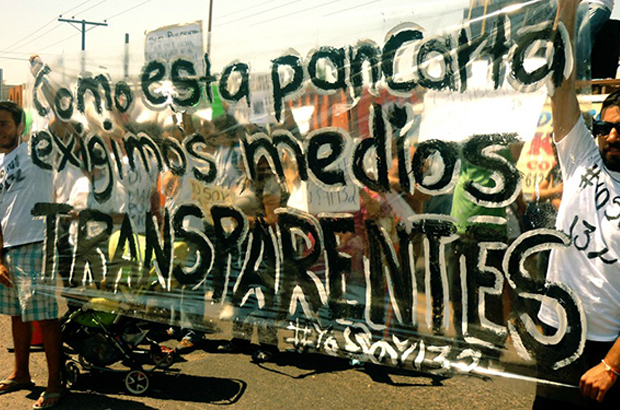 Mexican students protest in 2015. “We demand transparent media – like this banner.” Photo: #YoSoy132.

A good entry point for newcomers to the idea of communication rights is to bounce it against the idea of freedom of expression.

Most people believe they understand the basic of freedom of expression. It also ranks among the sacrosanct foundation stones of all human rights. It is contained in numerous international Treaties, Conventions and agreements, and enshrined, in varying formulations, in virtually national constitution and legislation. The most frequently cited reference point is to Article 19 of the Universal Declaration of Human Rights, endorsed by every member of the United Nations:

“Everyone has the right to freedom of opinion and expression; this right includes the freedom to hold opinions without interference and to seek, receive and impart information and ideas through any media and regardless of frontiers.”

One of its strengths is that is seems clear and transparent, something that all of us can understand: The meek and the mighty, each with identical freedom to seek receive and impart information? But is it really that simple? Is it enough?

How real is freedom to seek and receive information if our governments insist on meeting in secret? If Freedom of Information acts are too restrictive? If you have no right to participate in government debate? If we do not have access to a basic means of receiving such as the internet? If a few media voices are allowed to gain dominance, and they choose not to rock the boat; if the media have a mutual interest with politicians or big business; if they prioritise profit over people; will they use their voice equally for everyone? For that matter, if students cannot afford the monopoly prices charged for books and journals that are tightly controlled under digital rights management?

How real is freedom to impart if the ‘official’ language is not your mother tongue? If prejudice and racism stop others from listening? If you cannot gather together collectively and demonstrate publicly yours views? If you cannot communicate privately together, without fear of surveillance? If the information you impart is used for purposes other than those intended? Is a homeless person highlighting the injustice of it really likely to have his or her voice heard? They can shout, but will it make a difference (apart from being arrested)?

A problem with the idea of freedom of expression is that there are those who would take it on its own, in isolation. While they lay claim to its inspiring and essential ideal, this version in fact only supports a very narrow reality. And it is this version that I want to target here, and use to fill out the concept of CR. (not a swipe at Article 19, the NGO). Because in practice, it is this version that is being pushed on us in the neo-liberal agenda.

This version of freedom of expression is based conceptually on a group of communicating individuals, each with an equal right to conceive, impart and receive ideas from others and thereby to rationally arrive at decisions of mutual benefit – a great ideal. But the trouble is that we do not live as a group of equally empowered individuals. We live in a society in which most communication between people is heavily mediated and filtered, with mass media, governments, commercial corporations, special interest groups and many others all vying for attention, seeking to influence and control the content and flow of communications.

We also live in a society of hugely varying levels of access to power.

Freedom of expression, alone, can do little to limit domination of the loudest voices, i.e. media owners, the powerful. While a homeless person seeking to highlight injustice and a powerful media mogul each have, before the law, precisely the same protection for their right to freely express their views, in practice the former lacks a means to have her/his voice heard while the latter can powerfully amplify his/her message and ensure it is widely heard.

Thus a key challenge for freedom of expression is the conceptual shift from the idea of a group of individuals debating, to a complex and variegated society with heavily mediated communication and various and differential configurations of power.

What are these rights?

Communication rights are premised not only on “holding opinions” and “seeking, receiving and imparting information”, all of which are rights of a single individual or entity, but also on communicating, that is on the completion of an interaction between people. They seek to bring about a cycle that includes not only seeking, receiving and imparting, but also listening and being heard, understanding, learning, creating and responding.

The idea of communication rights maintains that freedom to interact with others is ultimately about generating a cycle of communication, from which learning, understanding and cooperation may ensue. But how is that cycle ensured? It is not possible to force others to listen, or to learn. Rather we must consider the conditions under which this positive cycle of communication can come about?

In fact, international law already recognises most of the conditions required for such a cycle. These include:

These conditions help break down barriers between people; reduce distortion and contamination of knowledge; provide enabling mechanisms and enhance self-determination; and nurture an environment of tolerance and self-respect. They do not oblige people to listen and learn from each other. But they create the social conditions in which this is more likely to happen. As such, the right to communicate is more than the sum of its parts.

Do recent dynamics justify the use of the concept of communication rights, as distinct from a focus on freedom of expression? Yes, and there are a number of very worrying trends. While government control of media globally has fallen in recent decades giving rise to a multiplicity of information sources, it has not yielded a corresponding increase in the diversity of content and genuine plurality of independent sources. Rather, commercialisation of media has narrowed the menu of content significantly and the resource devoted to key aspects of media; while concentration of ownership had greatly reduced the number of independent sources (the narrow version of freedom of expression is actually compatible with this.)

Together, these dynamics hugely influence each step of the communication process in society. Earlier, the process of communication and interaction was illustrated to highlight interactions and dialogue between people. At the level of society, it was noted, communication may be seen as a cycle of interactivity through which key elements of society relate to each other, completing a process of knowledge generation, mutual exchange and learning, and potentially enhancing the social well-being of all. As with individuals, the process constitutes a series of “moments” in a cycle that runs through creativity, communication, access, interaction, mutual understanding and learning, and on to further creativity.

Knowledge creation and recreation (which in practice occurs all through society) is potentially an activity for everyone, whether devoted to material production, to cultural and artistic endeavour, or to building social and political institutions. Dissemination and distribution is through mass media, publishing, the internet and a variety of other means. These act as gatekeepers and filters denying or permitting access to knowledge. However, gaining access to this dissemination process is a distinct requirement, as is the capacity to use such knowledge effectively to achieve goals.

Knowledge passing through this process goes into use, becoming the substance of interaction and communication between people and society in general. Knowledge can broadly be grouped in several interlinked areas: knowledge for the public sphere that underpins the democratic processes and social institutions; for economic activity that supports material existence; and for the vital process of community and individual identity formation, for cultural and artistic endeavour and so forth.

Out of all of this comes what can be termed the process of social learning, the capacity for society to address and resolve problems in the general interest. This in turn feeds back into, and hopefully further enhances and reinforces, the creative process of knowledge generation.

In a positive cycle, all of society benefits through more fertile and widespread creativity, broader distribution and deeper interactivity, and more profound levels of mutual understanding and social learning, and these feed into more democratic social institutions, sustainable economic activity and a diverse and rich cultural life.

Of course, this is highly schematic and simplistic. Creativity, knowledge and learning are involved at every stage and cannot be functionally isolated out. Media are integrally involved in the public sphere, in culture and so forth. However, splitting the process into these “moments” enables us to distinguish more clearly the impact of the dynamics outlined earlier on the social communication process.

Such impacts include: the process of knowledge creation is deeply influenced by the regime of knowledge ownership; excessive concentration of knowledge ownership in corporate hands, with extremely powerful means of copyright enforcement, has a major influence on the distribution of social incentives for creativity in society. (The “culture industries”, for instance, hugely reward only a few artists and largely ignore the rest; investment is channelled only towards commercially profitable activities; and audiences are targeted according to their profit maximisation potential.)

Excessive concentration of media ownership can have a somewhat similar impact. Resources are directed towards journalism and content production that maximises profits; media concentration can generate specific distortions in information reaching the public sphere, biased towards media owners and corporate capital generally. Commercialisation of media can lead to many being priced out of access to media; and coupled with advertising, generate a strong bias towards untrammelled individualist consumerism in the cultural and economic spheres.

Liberalisation and privatisation in telecommunications, if driven solely by commercial interests, can seriously limit access to electronic sources of information and means of communication. The erosion of civil rights in the emerging digital environment can inhibit dissemination of electronic material through censorship and limit interaction in the public sphere.

Impoverishing rather than enriching

These trends can fundamentally shape the outcomes of social communication and who benefits from it, through controlling the creation and ownership of knowledge, the processes and media of dissemination and communication, and its use to reach political, economic and social goals. The immediate danger is that each moment in the cycle becomes harnessed to the needs of capital and the market. The source of creativity becomes polluted, and the flow of knowledge is interrupted at various point in the process, the fruits of creativity diverted to feed ever more powerful and wealthy corporate interests. It is a gradual hollowing out of social communication, much of its value sidetracked and stockpiled in ever more bloated corporate coffers.

The ultimate danger is that the cycle of society’s social communication processes is interrupted, the process of social learning becomes ever more feeble, and in the end the process of creativity is transformed and reduced to short-term, unsustainable, generation of profits to benefit a small minority. Before too long, society may find itself having virtually lost the capacity for creativity, for an inclusive and equitable sharing of knowledge, for democratic participation in political structures, for diverse cultural expression and expression of identity, and even the capacity to learn from past and present generations.

Communication rights, as a concept and as practice, potentially have the depth and breadth needed to tackle these dangers.

Published in 2005 on the web site Comunicación y Ciudadanía.