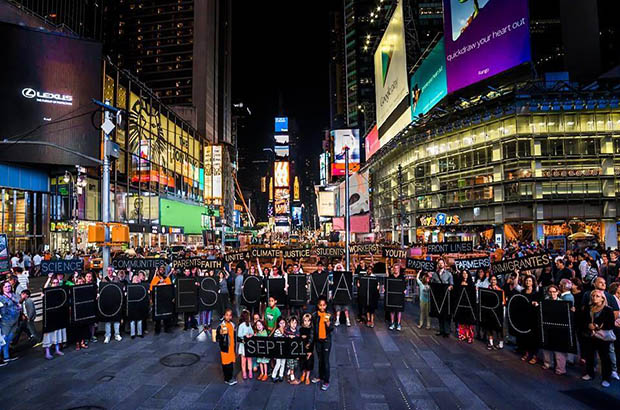 Listen to the voices of peaceful protest! Photo: NYCLightBrigade.

Faith groups are playing a significant role in communicating the need for action on climate change in the run-up to a massive planned demonstration, interfaith conference and U.N. meeting in New York.

Congregations across the faith spectrum are hosting events and meetings for volunteers willing to serve at the People’s Climate March, set for Sept. 21. Organizers say that from 80,000 to 100,000 people are expected to protest lack of action by world leaders on global warming and climate change, and 28 faith groups have endorsed the march.

The ecumenical Church Center at the U.N. on Sept. 19 hosted an International Day of Peace Symposium, asking (according to its website), “how are the core human needs of food, water, and health affected by … themes of peace, women, human security, climate change, and sustainable development?”

The Jewish congregation Romenu staged at West End Presbyterian Church a pre-Shabbat art/signmaking project for the march. St. Peter’s Roman Catholic Church was the site of a pre-march “teach-in” workshop on climate issues.

Anglican and Lutheran leaders in the U.S. and Canada on Sept. 19 released a joint pastoral message, saying they are “united as Christian leaders in our concern for the well-being of our neighbors and of God’s good creation that provides life and livelihood for all God’s creatures.”

Urging action, the leaders said, “We encourage you to take the initiative to engage decision-makers in this godly work in all arenas of public life — in government and business, in schools and civic organizations, in social media and also in our church life.”

Faith groups will lead the Interfaith Summit on Climate Change, scheduled for Sept. 21-22, highlighting “the specific contributions that faith traditions bring to the international climate debate, according to the organizers, the World Council of Churches and Religions for Peace

“One of the objectives of this Interfaith Summit will be to convey the faith communities’ concerns and proposals to the [U.N.] Climate Summit as part of long term efforts to influence the climate negotiations and the contributions countries bring to the table,” the interfaith summit’s website said.

Thirty religious leaders are scheduled to be at the gathering, reflecting a balance of gender, religions, geography, moral leadership and knowledge, as well as engagement on issues related to climate change. Indigenous people and youth will also be included, said organizers.

Another conference, Religions for the Earth, takes place from Sept. 19 to 21 at Union Theological Seminary in New York. “By helping to catalyze action in support of a just and effective international climate treaty, religious and spiritual leaders can help effect a shift in values towards an ecologically and ethically conscious global community,” said organizers.

The U.N. Climate Summit gets underway on Sept. 23 as U.N. Secretary­General Ban Ki­moon urges governments to support an ambitious agreement in 2015 that would reduce the environmental pollution that leads to global warming.

More than 120 heads of state and government are expected to attend, making it the largest gathering seeking to tackle climate change in history, according to the U.N.