Posted at 09:41h in News by Solange De Santis 0 Comments 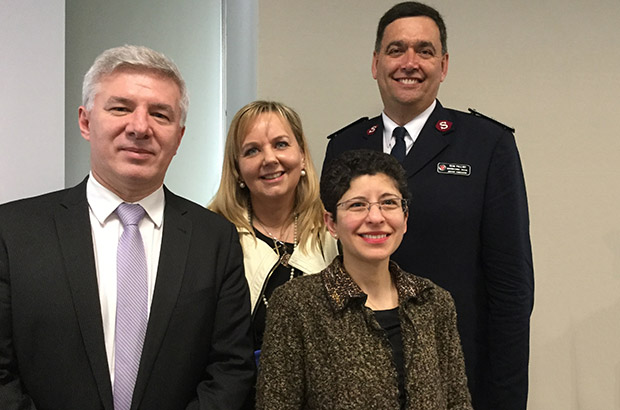 Religious values and organizations are vitally important to the success of the U.N.’s Sustainable Development Goals (SDGs) – a concept that the U.N. itself only now seems to be realizing, said experts at a panel discussion at the Religion Communicators Council annual convention, meeting in New York from March 31 to April 2.

The SDGs — 17 goals for human advancement meant to be achieved by 2030 – are aimed at developing connections among peoples and between humanity and the planet, unlike their predecessor, the U.N.’s earlier Millennium Development Goals (MDGs), noted WACC General Secretary, the Rev. Dr. Karin Achtelstetter. “Sustainable development looks at the intrinsic connections between people and planet. In doing so we need to take account of the spiritual dimension,” she observed.

“Faith-based organizations have been involved in development before the U.N. was created,” delivering health and education services when governments could not, said Rudelmar Bueno de Faria, World Council of Churches representative to the U.N. He added that religious language defines the principles behind the SDGs.

Moderated by Dr. Azza Karam, a senior adviser at the U.N. Population Fund, the April 2 plenary was entitled “What’s Faith Got to Do with It? Faith Organizations, the U.N. and the Sustainable Development Goals (SDGs).” The panel also included Lt. Col. Dr. Dean Pallant, director of the International Social Justice Commission at The Salvation Army, who said the “aspirational, holistic” SDGs reflect the ambitions of those with religious faith. “My faith is to be like Jesus and I fail at that every day, but that is my ambition,” he said.

The relationship between the U.N. and religious groups seems to be growing closer, but it has not always been smooth, the panelists observed. “For years, we were told that since you have the ‘C’ [Christian] in your name, you can never get funding and you cannot chair this or that. So for years we tried to learn secular language to be accepted. Now the pendulum has swung to the other extreme. Now we are told that faith matters, but where is the normality in this process?” asked Achtelstetter.

Faith-based organizations need to identify their purpose, said Pallant. “If we are going to negotiate this space, we need to be clear on who we are. Does our identity make a difference in the world? The SDGs are so helpful; they are a holistic vision of a redeemed world but we need to be clear this is not something we want to do because we want the money or because it is a U.N. agenda. It is God’s agenda,” Pallant said.

De Faria reaffirmed the importance of culture referencing a recent meeting in Lebanon where the Christians participants said, “we can’t work on a strategy of advancement for peace without being with our Muslim brothers.”

The panelists, in the end, all agreed that the religious principle of “love thy neighbor” – the Golden Rule, as Achtelstetter mentioned – governs the essence of the SDGs. De Faria said that “love is the answer you cannot talk about human dignity without taking love as the basis and this relates to the SDGs.”