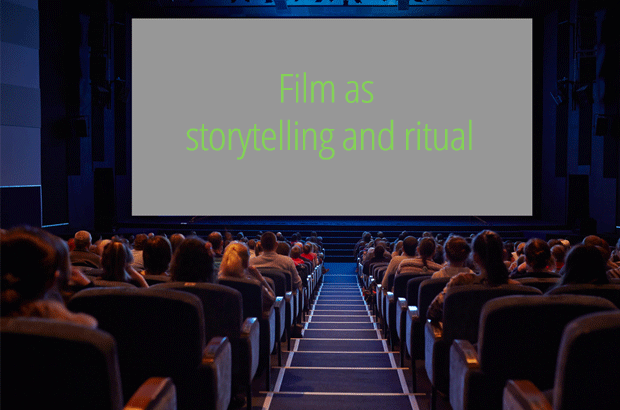 One of the articles in the spring issue of the quarterly publication Media Development considers the art of storytelling in the context of church and of cinema.

Journalist Kirsten Dietrich notes that the cinema and the Church have a lot in common – they are both “storytelling organizations,” as Julia Helmke, president of the Protestant film organization Interfilm, puts it. In an interview, she tells us what makes a good film and when it can be considered religious.

Dietrich writes that at the time the interview took place (in mid-February 2014), the Berlin International Film Festival was underway. An ecumenical jury follows the festival.

Dietrich: It looks like [the ecumenical jury] will have plenty to do considering the variety the Berlinale has to offer: from growing up in a strictly Catholic family – the film “Kreuzweg” – up to and including a film that accompanies a Buddhist monk for one hour as he walks through Marseille. So the Church is interested in film. But why?

Helmke: The Church is a storytelling organization that has told the biblical stories from the very beginning, preserved them and passed them on, updated them and retold them. Cinema is also a storytelling organization that tells tales of people, also accompanied by images. That makes it interesting for the Church, though it focuses more on the word.

Dietrich: Because both organizations have created stories together. The rituals are also similar: to go to church, to go to the cinema; we sit neatly in a row, look ahead where something transcendental might happen.

Helmke: I think cinema borrowed a bit from the Church or drew inspiration from it. The first cinema complexes that existed 100 years ago also had biblical names like “Gloria”, “Excelsior” and were made to resemble cathedrals – there is a clear structural analogy. At church, you feel like you’re at the cinema and vice-versa.

Dietrich: Can a film go so far as to take the function of a sermon?

Helmke: Yes, a sermon on its own wouldn’t be exciting enough. A film that is said to preach a message invites a negative connotation. I would say, a full church service, yes, definitely.

Hopefully, you leave feeling differently from when you arrived. You know what to expect and yet, hopefully, there is always an element of surprise!

Dietrich: That sounds like every trip to the cinema, every film you watch is automatically like that. Is the film entirely of secondary importance compared to what is shown?

Helmke: I think the ritual itself is important and is still important today even if more people stay home to watch films. But a visit to the cinema in company or the fact that you aren’t always watching something alone, but with others and can share that experience afterwards, that’s quite important. But of course, like a good sermon or church service, it is also important that the film itself is good. As different as the films from different genres are, they still have to offer a certain quality.

Dietrich: Are there criteria that determine whether a film is religious or draw attention to religious aspects in an appealing manner?

Helmke: There are actually very few. For a long time, reference has been made to film analysis, film dramaturgy involving the journey of the hero, that is, a person abandons his or her familiar surroundings and embarks on a journey and changes as a result of what she or he encounters along the way. In the end, the hero returns transformed if he or she hasn’t sacrificed him or herself for his community or for others. The story of salvation, of how Christ journeyed into the world, gave his life for the world, transforming people and the world as a result, can also be seen in this light.

To read the rest of the article, including Helmke’s insights on films such as “Harry Potter,” “Terminator” and “The Matrix,” click here to subscribe to Media Development.

Media Development is an international quarterly journal dedicated to the theory and practice of communication around the world. Many contributors write from the perspective of the South, highlighting social, cultural, and spiritual values.

Media Development publishes:
• informed and critical opinions on a broad range of topics
• relevant documents and materials
• reports of events and conferences
• a section on cinema
• occasional book reviews

Media Development seeks to keep abreast of developments in the field of mass, community and social media and to articulate common concerns in the search for equality, justice and human dignity in communication.

Media Development is available by subscription and is provided free to Personal and Corporate Members of WACC. For more information about becoming a Member of WACC please click here.