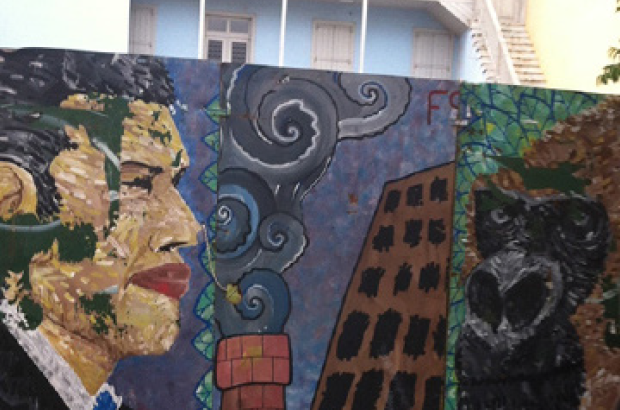 “Media freedom and democracy are about people’s happiness” exclaims Gvozden Flego, a philosophy professor and member of the Parliamentary Assembly of the Council of Europe (PACE) at a recent conference on Freedom of Expression. The discussion is intense and one of the most comprehensively organised conferences on the matter I have ever attended. The speakers raise structural, cultural and legal aspects of freedom of expression. The ultimate question of course always remains the same: What can we do?

It is not a coincidence that the Council of Europe decided to put so much energy and annoy some of its members by putting together this two-day event. Freedom of expression is not guaranteed or enjoyed in many parts of the world, but most surprisingly, or perhaps not, not even in European countries. A number of factors have coincided in creating the “perfect storm” that rages over the keyboards and screens of veteran journalists and young bloggers, from whistle-blowers to correspondents, from the editors of established media to photojournalists – right down to anyone who acts as a journalist, even if not full time.

Crises of many sorts are the cause and excuse for these ills: from the failure to protect journalists and their active persecution, to censoring and blocking access to the media, from the dismantling of public service media functions to forced closures, and from the precariousness of journalists to the rise of hate speech in the media.

It would be a mistake to assume that the “financial crisis” in Europe is solely a crisis of the financial and economic organisation of markets or that it is concentrated in the “unruly” European South. What started as a global banking crisis mutated into a long-term problem not only in financial and market connected areas, but also across all aspects of social and political life.

In the South of Europe, institutions have undergone an intense process of dismantling their functions and outreach. On the one hand, layoffs of public servants, the human resources of public services, results in the loss of intellectual capital and know-how. On the other hand, public spending has been severely cut resulting in an incapacitated sector that cannot cater for its citizens. This is particularly true for those sectors to which the most vulnerable social strata turn and on which they depend. Universal services, such as health, education and utilities (water, electricity) have been driven to functioning below par and ultimately are being offered to private investors at prices that resemble looting.

This political economic change affects the functions of the State, the function and legitimacy of further institutions, as distinct and varied as for example the police, public service media and the justice system. These institutional and social changes have a significant impact on citizens’ rights and ultimately on the quality of democracy.

Austerity politics have created not only new vulnerable groups and driven the largest parts of the middle classes to poverty. They have also affected the quality of media and restricted freedom of speech, both in structural and material terms and in terms of the content of the media generated for public consumption.

Structural constraints on freedom of expression

Across most European countries, the proclaimed expectations of increased freedom of expression have not been fulfilled. Media ownership concentration has not been dealt with, despite intensified and repeated calls for Europe-wide legislation for over two decades. In the case of the hot potato of the European financial crisis, Greece, mainstream media are owned by a few industrialists, whose connections to politics are long standing.

On top of that, until recently, private media in the country never paid tax nor have they ever acquired proper broadcasting licenses. Market liberalisation that was heralded as the guarantor of freedom of expression has failed, especially if one considers the arguments made against public service media and even State media.

Most European countries suffer political interference in the running of public service media – but also suffer from a generalised malaise of the unholy interconnections and dependencies between the press and the business and political worlds. The complex connections between markets and political elites in Europe create a stranglehold over content, leading to problems of biased and one-sided reporting; especially reporting related to the causes of and narratives about the crisis.

Important to note is perhaps the fact that problems do not concern merely “new” democracies or countries conveniently characterised as “corrupt” or unruly. Instead they dominate the media landscapes of countries such as the UK, Germany, Spain.

Major comparative studies of the legal status quo of the media in Europe, such as the one led by Psychogiopoulou (2014), demonstrate without a doubt the multiple, yet, worryingly similar ways in which control over the media is effectively applied through economic interests, financial control, governing positions, the regulation of specific functions of the media across nations.

Other recent studies investigated how the opinion leading press in Europe has reported the crisis and found little variation in the discussion of the causes of and possible solutions to the crisis, as well as an extremely limited debate about the impact of austerity policies. Moreover, studies found that the ways in which countries, and nations, such as Greece are reported in the press is xenophobic and stereotypical creating strong divisions between a “we” (of “good Europeans”) and “them” (of “bad Europeans”).

This one-sided and often hostile coverage of the negotiations about how to best deal with the financial crisis has also been reproduced within the countries most affected, as their media often mirror the international press. Moreover, the coverage shows that the press has broadly reproduced the views of the political and financial elites and has spent little time on providing analysis that does not conform.

However, the crisis has not only been the object of journalism coverage. It has affected journalism in more profound ways: due to austerity measures, the precariousness of journalism and media workers’ jobs and the professions is on the rise. A chain of changes in journalism practice as the outcome of a “changed” newsroom, which relies on technology and the prioritisation of profit, determines the quality of resources available for proper reporting and, ultimately, for the quality of communicative democracy. Labour conditions are characterised by casualization and temporality of contracts, withdrawal of protection of authorship, decrease in real salaries, increasing demands to produce content for multiple platforms.

In the meantime, in the majority of cases increasingly producing “news” in bulk is demanded without additional and with reduced resources, while, responding to the “stories” as they develop is based on aggregators, news agencies and limited sources, leading to a homogenous storytelling of events.

The combination of these structural characteristics together with a lack of transparency and the connections to political and financial elites creates a toxic environment for journalists who aim to produce investigative – and therefore critical – journalism.

Finally, the era of overarching surveillance, after the Snowden and Wikileaks revelations, impose additional restrictions and constraints on freedom of expression. We cannot yet fully assess the range and depth of the impact of surveillance processes on journalists’ work. To what extent does the securitisation of communication, translated in the very distinct practice of surveillance, endanger informants as well as journalists? To what extent, in their effort to avoid extensive risks, do media workers apply self-censorship and to what extent do such tactics result in a chilling effect across investigative media? What does it mean for the production of dissent media and grassroots media? Ultimately, what does surveillance mean for the participation of citizens in the public sphere and in democracy? 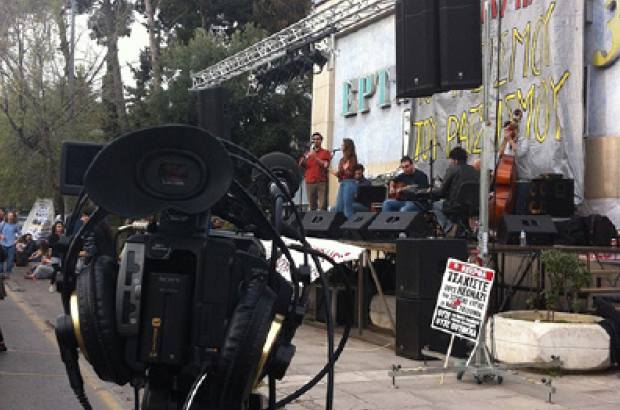 Preparations for a world antifascist event outside the premises of ERT3 in Thessaloniki in 2014. Photo: Author.

Nevertheless, one of the main observations in recent years has been a renewed need for citizen-driven media and communicative spaces, deriving from and assisted by social movements, such as Indignados, Occupy, anti-austerity and feminist movements, and social resistance movements in various geographies around the world. Particularly in spheres of acute crisis, whether political or financial, speech constraints are operationalized in ways including but not limited to legal frameworks.1

Since 2009, when the global banking crisis “hit” Europe, Greece has been at the centre of debates in the public sphere, as the “crisis country”. With discourses about the crisis resembling an epidemic, a “sick” patient and, worse still, with discourses of moral wrongdoings that brought upon the country the “punishment” of financial crisis, the international press has maintained almost in its entirety a homogenous narrative. It has focused on political and financial elites and omitted narratives from the perspectives of citizens and societies at large, not limited to those of Greece.

At the same time, a growing disconnect between society and the state, society and institutions, including the media, has characterised the last five years: distrust in institutions, as well as elite politics, including the political decisions of the European Union as a polity, has driven citizens to exploring ways of connection with each other, among social groups, across geographies and political convictions.

These forms of connectedness, from the so-called “social medical centres” run by medical and nonmedical volunteers to alternative in-kind credit economies, from open community run soup kitchens and self-organised environment protection and anti-gold (mining)2 “squads”, to self-governed and employee run factories and Public Service Broadcaster3 radio and television stations, intensified processes of “doing” citizenship are seen throughout the South of Europe.

My contention is that these acts of citizenship are integral and vital elements of a struggle by citizens to regain not only some control over the distribution of resources but also to regain a sense of dignity and autonomy by turning freedom of expression into lived experience.

Freedom of speech is connected to freedom of assembly, the right to dignity and right to privacy. Moreover, it is considered as a multilevel freedom interconnected to both the personal level of the individual and the structural level of institutional guarantees and institutionalised mediated forms of public speech. In the case of austerity Europe, the social contract between citizen and the State has been violated.

Moreover, through violations of human rights and the law, the State has ceased to recognise citizens as autonomous subjects and is denying them the conditions under which the exercise of citizenship is meaningful – among which those under which freedom of expression can be enjoyed. Participation in the public sphere has been eroded because the material conditions enabling it have deteriorated: not merely through impoverishment4 and unemployment, but also through the shrinkage or demolition of public spaces, such as public service media, and the dismantling of public services.

It is imperative that societies engage fully with the pressing need to advocate for the protection of freedom of expression and the material and immaterial conditions that create enabling environments for a free press and free speech. A silent redefinition of freedom of speech has been taking place across too many fronts to list in detail, but they include structural constraints, and governance practices that are mirrored in the content output of media corporations. They are also reflected in the prohibitive stance of the State and its instruments in not tolerating public dissent, protest and non-conformist patterns of association and assembly.

1. See for example the so called ‚gag law’ Citizens Security Law in Spain, as well as the 2014 Amnesty International Report on the Greek Police

2. This refers to social movements against the privatisation of water, as well as against gold-mining in Northern Greece at the location of Skouries (http://antigoldgr.org/en/) among other acts of environmental exploitation and destruction.

3. The Greek Public Service Broadcaster ERT (Elliniki Radiofonia Tileorasi) (www.ert.gr) was shut down, unconstitutionally, as was never ratified by Parliament, by the then Samaras Government on June 11, 2013. ERT quickly became ERTOPEN (www.ertopen.com) run by its former employees, who continued broadcasting for 24 months until the reopening of ERT on June 11, 2015 under the SYRIZA government.

4. According to Eurostat (2014) more than 40% of Europeans cannot afford unexpected financial expenses and one in ten people are affected by severe material deprivation.