Get the latest issue of Media Development: Communication pirates of the Caribbean
23409
post-template-default,single,single-post,postid-23409,single-format-standard,theme-bridge,bridge-core-3.0.1,woocommerce-no-js,qodef-qi--no-touch,qi-addons-for-elementor-1.5.1,qode-page-transition-enabled,ajax_fade,page_not_loaded,,qode-title-hidden,columns-4,qode-child-theme-ver-1.0.0,qode-theme-ver-28.6,qode-theme-bridge,qode_header_in_grid,qode-wpml-enabled,wpb-js-composer js-comp-ver-6.8.0,vc_responsive,elementor-default,elementor-kit-41156 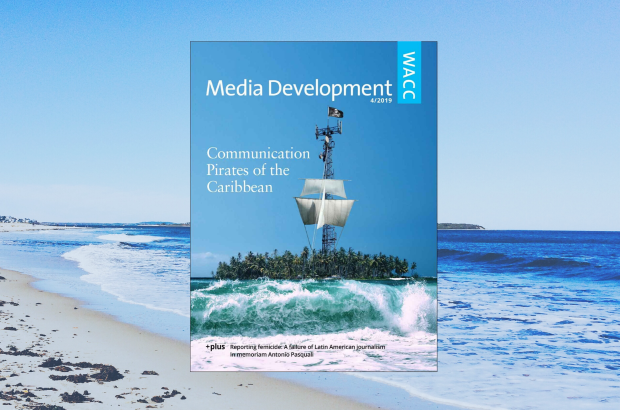 22 Nov 2019 Get the latest issue of Media Development: Communication pirates of the Caribbean

This year’s last issue of WACC’s quarterly journal, Media Development, takes an in-depth look at the state of the Caribbean’s media and communications industry and their influence on the region’s socio-economic and political environments.

The issue’s theme, Communication pirates of the Caribbean, which references the popular film franchise, “underlines the fact that justice and ethics are often absent from decision-making policies that have significant impact on ordinary people,” writes Philip Lee, Media Development editor and WACC general secretary.

A number of articles explore the rough seas of the technological revolution.

Ahead of the 20th anniversary of the enactment of legislation to liberalise the telecommunications sector in small states of Eastern Caribbean, Embert Charles reflects on what this has meant to the social, economic and political life of their populations. Charles is a Saint Lucian communication and media specialist and president of WACC Global.

Telecommunications liberalization has “changed the landscape in the Caribbean,” writes Charles. For one, it has “ushered in the convergence of technologies, making it possible to deliver many services – voice telephony, data and ‘broadcasting – using the same infrastructure,” he writes. But it has also caused a “drifting toward duopolies and possibly monopolies in the production and distribution of services,” he adds.

In Digital surveillance and surveillance capitalism in the Caribbean, Saint Lucian journalist Peter Richards, writes about the digital revolution’s impact on privacy and concerns about freedom of expression as governments rush to respond with legislations on such issues as data protection and cybercrime.

“Privacy has become a real concern,” in the region, as it has been in many parts of the world, he writes. Richards notes that Trinidad and Tobago were among the countries affected by the Facebook/Cambridge Analytica scandal in 2018. Cambridge Analytica, the British political consulting firm, mined the personal data of Trinidadians on Facebook, without their consent and used it for political advertising purposes.

Consumer surveillance, mostly for targeted marketing and advertising, is a pervasive problem, writes Richards. “In a more direct monetization, many companies also sell customer data gathered through various surveillance channels to partners and other third parties.”

Meanwhile, behavior change communicator Kimiko Scott’s From little brown foxes to mediated interpersonal communication, offers a fascinating history of the broadcast media in the Caribbean and its current state.

Radio stations today are “identifying as brands and as such they are integrating listeners into groups, making them feel members of a unique community,” writes Scott. Concerns are being raised about how this situation has “eroded from being positive, where a community of listeners is established as a result of radio formats, to the media now being used to keep people apart instead of bringing them together.”

Other articles in the issue are:

From smoke signals to algorithms: The evolution of media in the Caribbean, by Amitabh Sharma
Personal Privacy and Regulation in the Age of Big Data: The Jamaican Perspective, by Mark Beckford and Keresa Arnold

The issue also remembers Antonio Pasquali, a distinguished philosopher, academic and researcher “whose work underpinned much of WACC’s own thinking in regard to communication rights and social justice.” Pasquali was also highly-respected mentor and partner of WACC Latin America and of WACC Global and contributor to Media Development.