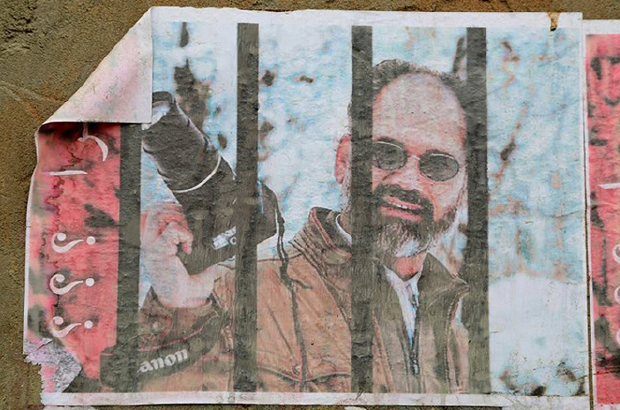 A poster on the streets of Kabul campaigning against the capricious imprisonment of Najibullah Musafer, a renowned photojournalist in Afghanistan. The left side of the poster reads “Why???” (Photo: Najibullah Musafer).

Afghanistan once housed tourists from around the world intrigued by the Silk Road stories, the poetic and mystic culture, the majestic landscape and the hospitable people. Their experience in Afghanistan was frequently captured through journalism and photojournalism of the early 1900s. However, Afghanistan’s very own media culture was born during this same time with Seraj-ul-Akhbar being the country’s first newspaper, published on 11 January 1906.

The Director of the Afghan Journalist Center, Ahmad Quraishi, notes this was the only issue published until the newspaper was revived in October 1911 by Mahmood Tarzai, “Father of Afghanistan Journalism”. Media development continued with Radio Kabul’s first broadcasting in 1925. The next major milestone was legislating for a Press Law within the Constitution of Afghanistan in July 1965, which provided the legal framework for freedom of the press.1 Afghan journalism continued to develop and progress throughout this period of time. However, it is important to bear in mind that the geopolitical position of the country rarely permitted the practice of truly independent media.

The Taliban’s occupation of the country in 1996 resulted in a complete halt to freedom of expression. The extremist regime lasting from 1996-2001 set out to wipe out the country’s tolerant and vibrant culture and re-establish law and order under the pretext of religious decree. As part of its extremist rule one of the major undertakings by the Taliban was a widespread ban on journalism and photography. The few media sources were strictly controlled by the Taliban and became a means to convey their radical perspective and legitimize their rule. Hence, media by definition became a propaganda tool for the Taliban.

In the post-Taliban regime, however, the prospects for the country changed dramatically as an international coalition formed to fight terrorists in Afghanistan and promised to establish peace, security, and democratic rule in the country. Schools were established, the infrastructure was rebuilt, a promising political regime was installed, and women’s rights were championed once again.

On the media front, Afghanistan’s former Minister of Culture and Information, Seyyed Makhdum Rahin, noted that the country went from 0 to 200 media outlets in the post-Taliban regime.2 Producing and broadcasting with such a high number of television stations, radio stations, and newspapers is a new phenomenon in Afghanistan. The country re-legislated a Mass Media Law in 2009, seeking to ensure freedom of expression through the media, protection of journalists, and to regulate the activities of mass media.

This presents a promising future for free media in Afghanistan, except in practice Afghan media are still subject to geopolitical and socio-cultural conditions that set up barriers to freedom of expression.

Reporters sans Frontières’ 2015 World Press Freedom Index ranks Afghanistan #122 out of 180 countries, increasing its rank by 6 from the 2014 results.3 But, taking into account the political context of the country, freedom of expression in practice has actually been in decline since 2013. The unique political structure formed by a President and a Chief Executive Officer of Afghanistan and the continued presence of the Taliban at different levels of power have increased competition among the various leaders and factions to influence and gain public support. Influential power holders push their personal political agendas onto media personnel thus restricting the practice of free, democratic, and protected media in Afghanistan.

In a political environment such as Afghanistan’s, media practitioners must work above and beyond the call of duty in order to fulfill their professional obligations. To understand the political barriers, one must consider four main thresholds for media professionals: manoeuvring through powerful entities in Afghan society, juggling conflicting ideological directions among political and religious leaders, situating their work in obscure legal frameworks, and protecting themselves from security threats.

In terms of political meddling, there have been a number of cases that reveal political leaders’ interference in media affairs. For instance, the Afghanistan Analyst Network, an independent non-profit research and analysis organization, identifies two active political leaders, Rashid Dostum and Burhanuddin Rabbani, known to sponsor private media channels that serve their distinct political agendas and leading the country to a “war of the media”.4

Another example is of a noted photojournalist, Najibullah Musafer, whose capricious imprisonment in February 2015 for “copyright violation” is assumed to be related to his other bodies of work which likely offended an official in power.5 Media activists such as Fahim Dashti raise awareness and speak against limits to Afghan journalists’ critical coverage of government officials and powerful figures, but the arbitrary justice system continues to be less favourable to civilian voices.

The number of journalists threatened, arrested, and who have experienced physical harm is increasing over the years. Nai, a media training and advocacy organisation also affiliated with the International Freedom of Expression Exchange, reports a 64% increase in violence against journalists in Afghanistan between 2013 and 2014. However, the government is slow to respond to the issue and to ensure the protection of journalists’ rights. On the one hand this leads to negligence and a culture of crime and impunity for media dictators and on the other to self-censorship among journalists.

Despite a degree of advancement through a legal framework such as the Mass Media Law of Afghanistan, enacted in accordance with Article 34 of the Constitution and Article 19 of the International Covenant of Human Rights, legal frameworks alone cannot guarantee protection for media professionals. In Afghanistan, the tenets and provisions of religious ideology hold sway over state laws as outlined in Article 3 of the Constitution: “No law shall contravene the tenets and provisions of the holy religion of Islam in Afghanistan”.

Cases of media censorship and regulation particularly become complicated when religious scholars intervene in determining whether media content is Islamic or un-Islamic. The Ulama Council’s decisions – the highest body of key Islamic leaders largely funded by the government – at times contradicts constitutional laws. Article 20 of the Mass Media Law states “private radio and television are obligated to observe the principles and provisions of the holy religion of Islam, and national, spiritual and moral values and the psychological security of the Afghan nation in their programming”. The problem here is that with a lack of clear definition of what constitutes Islamic or un-Islamic media content, the conservative groups advancing these notions tend to use religion as an ultimatum. 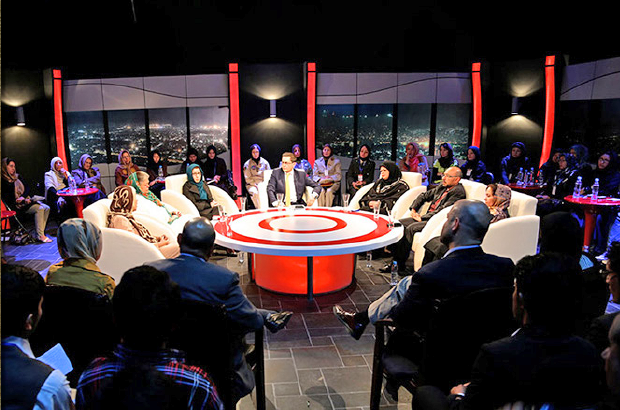 Barriers due to insecurity

Another tragic reality of journalism in Afghanistan is that media workers face a major barrier on the security front. While the assumption of risks involved in conflict zones is a given for journalists and reporters around the world, the degree of risk continues to be relatively high for Afghan journalists. Human Rights Watch released a report in January 2015 documenting increased intimidation and violence towards Afghan journalists from both state and non-state actors and the government’s failure to investigate and prosecute those responsible. Taliban insurgency play a large part in creating a climate of fear and intimidation for journalists.

In December 2014, the Taliban released a statement warning journalists who support “Western values” to cease their work or face the consequence of targeted attacks – meanwhile a series of targeted attacks had already taken place throughout 2014.6 Despite improved security efforts, Afghanistan remains one of the most vulnerable and insecure countries, particularly for media workers who face harassment, intimidation, threats and attacks on a regular basis.

The country’s current socio-cultural environment bears no resemblance to earlier times. For instance, in 1921 Kabul published a women’s magazine, Irshad-e Naswan, focusing on violence and other social and political issues related to women. In contrast, today’s cultural and social conservatism contributes to limiting freedom of expression for women and minority groups in Afghanistan. There are two sides to socio-cultural conservatism as a barrier to media: the challenge for women to participate in media, and the challenge to cover sensitive social issues in media, i.e. religion, women’s rights, sexuality, etc.

Afghan women are by and large segregated from the public sphere, but in recent years women are slowly reintegrating into society mainly through their participation in the workforce. However, few women choose to enter the field of journalism and media communications due to limitations in mobility and women’s increased vulnerability to threats and attacks, including sexual violence. On the other hand, because of gender segregation in Afghan society, male journalists do not have privileged and unlimited access to female dominated environments. As a result, women’s participation and presence in the media is very limited.

Additionally, conservative ideology in patriarchal societies like Afghanistan attach a stigma to women appearing in the public eye. Whether taking on the role of a news reporter, television host, eyewitness or commentator, women are discouraged and given undesirable labels. All of this contributes to the barriers for women’s access to and freedom of expression through the media.

Another crucial obstacle to media freedom in Afghanistan is scepticism towards Western influence in and through the media. Afghanistan’s conservative-minded population and authorities often target foreign donor-funded private media channels, namely Tolo TV and 1TV, demanding censorship or cancelation of programmes with “un-Islamic” content. Previous examples of media content deemed “un-Islamic” or “Westernized” include portraying women in an “undignified” manner and showcasing non-Muslim religious beliefs.

Hence, given social conservatism in Afghanistan, journalists are seen as a threat not only to political figures but also to the social order as they introduce new ideas and challenge preconceived notions that are dominant in society.

Communication is a right

Like any other country, the role of media in Afghanistan is very significant. In the 2014 presidential elections one in three Afghans (33.5%) stated media was their primary source (including TV, radio, and the Internet) to learn about the candidates and to decide on their vote.7 Civil society benefits from media as it provides a third dimension to public affairs hence it is critical to maintain the fragile gains in Afghanistan’s media development and freedom. The Asia Foundation reported 72.7% of Afghans express confidence in the media.8 However, considering the barriers and challenges for media, one questions to what extent does media freedom really exist?

Communication rights promote the individual freedom to express oneself, but they are also a valuable tool for greater political and social justice. Afghan media professionals are important agents in the peace and reconstruction of the country and they are the means to change Afghanistan’s representation in the international community.

One can only hope that the day will come when the obstacles to free media and communication are shattered – not the dreams of the young men and women seeking to rebuild their country and their future.

7. “Afghanistan in 2014: A survey of the Afghan People. Executive Summary” The Asia Foundation. http://asiafoundation.org/resources/pdfs/ExecSummaryAG2014.pdf