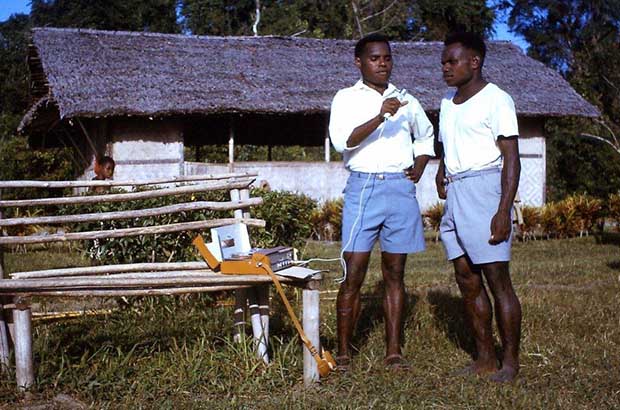 The question “who gets to tell your story?” is a complex one in the developing Pacific Island states of Papua New Guinea and the Solomon Islands, according to an article by journalist Catherine Wilson in the current quarterly issue of Media Development.

In Papua New Guinea, “the remote rainforest-covered islands of Bougainville are more than 900 kilometres from the gritty streets of [the] capital, Port Moresby,” she notes. However, Internet-savvy citizens have challenged news reporting, such as the coverage of a protest in Port Moresby on June 8, 2016 about perceived government corruption

“Activists were far from impressed by local media coverage, which was hindered by an official reporting ban. Deeming news stories to be pro-government and biased, activists destroyed copies of the country’s two main daily newspapers, The National and Post-Courier, being sold by nearby,” Wilson writes.

It was a moment to reflect on the media landscape in this island state often labelled a “vibrant democracy”. PNG’s media is said to be free, “but its performance in holding the government to account, supporting right to memory, equitable access to information and informed debate in reality faces substantial hurdles,” she notes.

The article points out that it is not unknown for local journalists who tackle politically sensitive issues to be subjected to pressure by politicians and powerful corporate actors or even to suffer physical assaults. Politicians retaliate quickly, in particular, to stories implicating them in corruption or wrongdoing.

However, discussion about governance and public dissent should not exclude factors related to the country’s immense mineral wealth, such as an unhealthy alliance between the political elite and foreign corporate sector, which is linked to corruption.

Low human development, with 40% of people living below the poverty line, persists in a country where reserves of copper, gold, nickel, timber and natural gas have driven some of the world’s highest GDP growth rates over the past decade. But the state-corporate alliance is also connected with suppression of citizens’ opposition to resource extraction projects and their environmental and social impacts, the article relates.

To read more about the unique challenges to communication experienced in the Pacific Islands, subscribe here to Media Development.