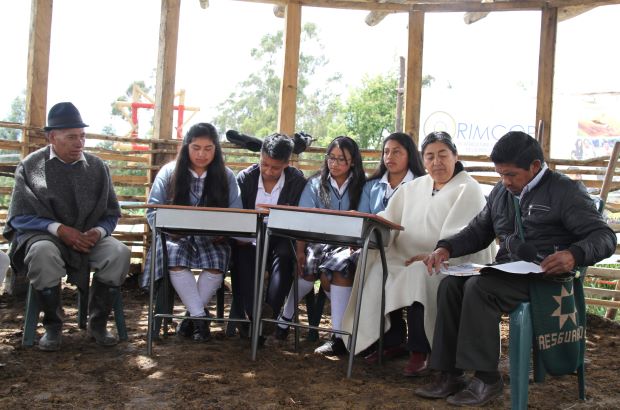 A project supported by WACC Global has trained more than 100 Indigenous broadcasters and members of the Indigenous community of Muellamués, Colombia, in producing radio programmes on peace, self-governance, gender equality, and human rights.

Over the years, PROCOINDES has worked on environmental protection and Indigenous heritage issues.  In 2010, it joined RIMCOPI, a network of 15 Indigenous radio stations in Nariño.

The project was aimed at strengthening the groups’ work, especially in relation to communication efforts that seek to advance a culture of peace, Indigenous rights and heritage, sustainable development, and environmental stewardship.

In establishing the project, PROCOINDES hoped to improve Indigenous communication as a way of strengthening the culture and identity of the Muellamués community, said its coordinator Hemersson Diaz Trejo. This, in turn, will help build “Indigenous resistance against the onslaught of globalization” and create a space for promoting “inter-culturalism,” said Diaz Trejo.

Located on the Colombia-Ecuador border, the community of Muellamués has experienced conflict since the late 1980s.

The Muellamueses are descendants of the pre-Colombian Pasto and are small holders who inhabit the mountains of the highest municipality in Colombia, according to the Massachusetts-based non-profit group Cultural Survival. “…They live on a reservation whose title was granted during the eighteenth century, and cultivate potatoes and other Andean crops as well as engage in dairy farming.”

The Muellamueses are entitled “to a certain degree of political autonomy, embodied in a cabildo or reservation council, and to territorial autonomy, since their lands are communally owned and possession of reservation lands by nonmembers is illegal,” said Cultural Survival. The community has faced “constant pressure to dissolve this autonomy, it added.

In recent years, the community has experienced numerous human rights violations stemming from its opposition to drug trafficking and other illegal activities conducted by competing paramilitaries and armed groups in the area.

Early this year, UN High Commissioner for Human Rights Marta Hurtado raised alarm at the “staggering” number of human rights activists killed in Colombia in 2019. “According to our records, 107 activists were killed last year, and our staff in Colombia are still in the process of verifying 13 additional cases reported during 2019 which, if confirmed, would raise the annual total to 120 killings,” said Hurtado. —by Marites Sison

Photo above: In establishing the project, organizers hoped to improve Indigenous communication as a way of strengthening the culture and identity of the Muellamués community.”  by  PROCOINDES