No democracy without freedom of expression for Indigenous Peoples
20860
post-template-default,single,single-post,postid-20860,single-format-standard,theme-bridge,bridge-core-3.0.1,woocommerce-no-js,qodef-qi--no-touch,qi-addons-for-elementor-1.5.6,qode-page-transition-enabled,ajax_fade,page_not_loaded,,qode-title-hidden,columns-4,qode-child-theme-ver-1.0.0,qode-theme-ver-29.2,qode-theme-bridge,qode_header_in_grid,qode-wpml-enabled,wpb-js-composer js-comp-ver-6.10.0,vc_responsive,elementor-default,elementor-kit-41156 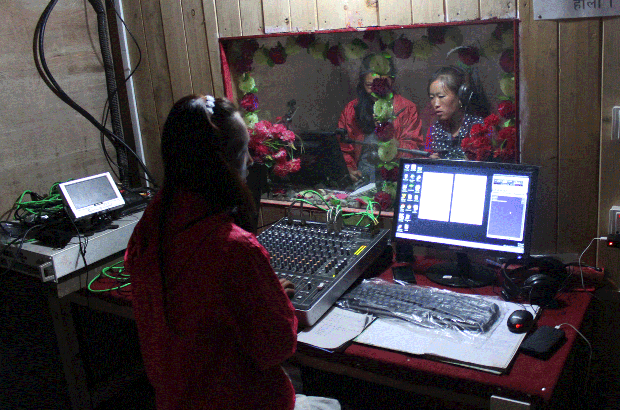 On air at Radio Kairan in Bamti-Bhandar-4, Ramechhap, Nepal, one of the stations Cultural Survival helped rebuild after the devastating earthquakes of 2015. Photo by Dev Kumar.

On January 20, 2015, the town of Santa Eulalia Huehuetenango, Guatemala became the centre of an unfortunate and too common violent sequence of events targeting community journalists. The local community radio station Radio Snuq Jolom Konob was reporting about the national police terrorizing local residents during their search for “agitators.” The local authorities responded by shutting down the radio station.

Guatemalan community radio stations are frequently targeted in police raids. Over the preceding months, the residents of Santa Eulalia had been the protesting against a hydroelectric company, Proyectos de Desarrollo Hídrico, which was developing plans for a dam on Q’anjobal Maya traditional lands and the station had been reporting on the protests.

“We need the intervention of organizations and authorities that protect human rights in order to get this information out. It is obvious that our authorities won’t do anything to protect us,” stated the radio station’s manager and communications rights defender Lorenzo Francisco Mateo. “We ask all of those that support us to help keep us safe, because many of our friends and co-workers are traumatized and scared. Five people were beaten pretty badly and we don’t know what will happen to us,” he added.

Persecution of community radio stations, like Radio Snuq Jolom Konob, is an all too common occurrence in Guatemala. The first six months of 2015 alone saw 59 documented attacks against journalists including the murder of three journalists within one week in March. Cultural Survival, an Indigenous Peoples’ rights organization, has been working with the community radio movement in Guatemala since 2005.

Community radio also serves the vital function of distributing content to listeners in their own languages, reaching even the poorest areas where radio is often the only affordable form of communication. The right to this media is clearly defined by the Guatemalan Peace Accords, the Guatemalan constitution, UN Declaration on the Rights of Indigenous Peoples (Article 16), and international human rights bodies like the United Nations, the International Labor Organization, and the Inter-American Commission on Human Rights, yet access to community radio remains restricted due to an outdated telecommunications law that the Guatemalan Congress refuses to change.

Cesar Gomez, Content Production and Training Coordinator for Cultural Survival’s Community Media Program, explained that other community radio stations cannot be deterred from their important work, “As a media community we must make a decision to be at risk and continue to speak out. Radio Snuq Jolom Konob has served its community for over 15 years! This is a clear violation to our rights as Indigenous Peoples.”

Anselmo Xunic, Program Manager for Cultural Survival’s Community Media Program, declared, “As an organization that aims to protect the rights of Indigenous Peoples and freedom of expression in Guatemala, we are shocked that the government continues to ignore us. We can only continue to petition the State and the international community to spread the word. Our authorities here aren’t doing anything– we must now rely on our allies abroad to put pressure on the Guatemalan government.”

In the internet age, small community-based radio stations may seem an outmoded means of communication. But for many Indigenous Peoples the low cost of community radio makes it the ideal tool for defending their cultures, their lands and natural resources, and their rights. Even in very poor, isolated communities lacking electricity, many can afford a small battery-powered radio. Radio is the medium of choice in many remote areas with little other forms of communication and it is the primary source of news, information and entertainment.

Town officials, the Guatemalan Ministry of Health, the National Police, and, during elections many political candidates, use community radio because they know it is the best way to reach listeners in rural, predominately Indigenous regions of the country. In spite of all this, the current Guatemalan telecommunications law does not provide a licensing mechanism for community radio. This situation places the volunteers who run each local community radio station in a difficult position; in order to exercise their right and serve their community they must risk arrest for operating a station without a license.

Cultural Survival, alongside our Guatemalan sister organization, Asociación Sobrevivencia Cultural, has developed a network of dozens of community radio stations across Guatemala, as well as in El Salvador and Belize. These stations learn how to improve their operations through a series of training workshops and exchanges. Cultural Survival also provides these stations with programming on a regular basis, covering important topics such as Indigenous communities’ right to Free, Prior and Informed Consent; reproductive rights and education; and caring for the environment.

Community radio volunteer at Radio Ixchel, Sumpango, Angélica Cubur Sul says, “As an Indigenous women, I can say that the community radio is the only place that I can express my views and opinions and be sure that they will be heard by the entire town. The Mayor expresses his opinion on our radio, so do the police, and so do I.”

Cultural Survival’s Community Media Program operates mainly in Guatemala,as well as El Salvador, Panama and Belize, and continues to expand to all of Central America. Through litigation support and advocacy, the program also works to: 1) legalize community radio in Guatemala by pressing for reform of the country’s repressive telecommunications law; 2) assure Indigenous Peoples right to freedom of expression; and 3) support community radio stations that have been unjustly shut down by the government to resume on-air operations. 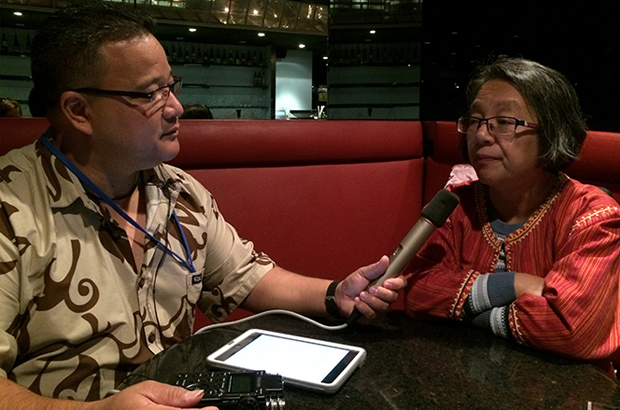 Cultural Survival’s Indigenous radio producers gather stories from Indigenous Peoples around the world. In English, Spanish, and a growing array of Indigenous languages, we bring the voices of the native peoples of Australia, Asia, Africa, Europe, and the Americas into dynamic dialogue about the meaning of Indigenous Peoples’ rights, their common struggles, and their evolving and innovative solutions to the issues they face today. To date, 1461 radio stations have received our programs, across 55 countries, in 30 languages.

On December 9, 2014, Sololá’s beloved Radio Juventud was added to the list of community radio stations raided by the Guatemalan Public Ministry. All equipment was seized. For over 10 years Radio Juventud has contributed to educating and informing the surrounding communities. Broadcasting the majority of its programs in the local Indigenous language, Kaqchiqel, the station counts women, children, elders and many youth among its members. Sololá’s Indigenous communities are informed of their rights as Indigenous People, in part due to the efforts of Radio Juventud broadcasting Indigenous Rights Radio programming produced and distributed globally by Cultural Survival.

Immediately following the raid, the community quickly organized and notified the Indigenous Municipal Authorities. Together, they addressed the judge who authorized the raid, citing the UN Declaration on the Rights of Indigenous (Article 16), the Guatemalan Constitution and the Peace Accords, while making the case for why the station is essential to their community, and demanding a return of the seized equipment.

The judge spoke to the leaders and stated that he had signed the permission without understanding the effect it would have on the community. The Indigenous authorities and radio volunteers began protesting in front of the courthouse and demanded that the judge petition the Office of the Public Prosecutor and the National Police to return of all the confiscated equipment.

“We have come to very respectfully ask that the Commission follow up on our request. We are well aware of current policies on radio broadcast throughout the region and the sustained approach that favours monopolies and oligopolies. Central America is challenged in developing a human rights approach to communication. This requires dismantling the hyper-mercantilization that has drawn the human rights map,” said Ancelmo Xunic as he addressed the Inter-American Commission on Human Rights on October 23, 2015 at a thematic hearing on Examining Freedom of Expression in Honduras, El Salvador, and Guatemala during its 156th Session in Washington, D.C.

Organized by Cultural Survival and partner organizations1 the session sought to shine a spotlight on the daily rights violations that Indigenous journalists and communities face when exercising the universal right to freedom of expression and communication.

International advocacy is just another avenue to put pressure on Guatemala and other Central American countries to respect, protect and fulfil the right to freedom of expression for Indigenous communities. These basic rights make up the foundation of a well-functioning democracy, yet communities in Central America share a common experience, history, and reality that citizens’ freedom of expression and the right to communication are not equally respected and guaranteed.

Indigenous journalists and community radio operators, despite physical threats, state persecution, and even risk of death, continue to exercise their rights in order to serve their communities. Telecommunications laws in Central America do not recognize community radio except in Honduras, and even there, a law that favors commercial institutions is the one that prevails.

“Guatemala’s diversity is its strength, but there is discrimination, and it has been co-opted by de-facto groups that hold power and abuse it. The concentration of media is viewed as normal among the people who do not realize it is a violation of social, civil, and political rights and an attack on their freedom of expression. It violates the quality of democracy, democratization of media, and the constitution,” said Alma Gloria Temaj-Morales of Asociación Mujb’ab’l yol: Encuentro de Expresiones.

The 1996 Peace Accords that ended Guatemala’s 36-year civil war guaranteed the democratization of the media. However, the current telecommunications law makes no provision for non-profit community radio. “One of the strategic resources is radio frequency. We are seeing a greater concentration of media outlets, and concern is strong when greater concentration of media is in few hands. These outlets have undermined standards of democracy. Young democracies are at the mercy of serious structural voids that threaten the progress of their political systems,” said Xunic.

In Guatemala, radio frequencies are either reserved for government use or auctioned to the highest bidder, so Indigenous communities must compete directly with commercial radio stations. The Community Radio Movement of Guatemala with Cultural Survival’s support brought a case to the Constitutional Court arguing that this practice is discriminatory against Indigenous Peoples. In March 2012, the court exhorted the congress to legislate in favour of Indigenous community radio stations, allowing them access to radio frequencies. Since then, Bill 4087, which seeks to legalize and regulate community radio, has been introduced to the Guatemalan Congress, but it has not been ratified into law.

The concentration of media ownership is a violation to Article 130 of the Guatemalan Constitution, which prohibits media monopolies. “The concentration of media due to political candidates asking for airtime…these are structures of power that are coordinated around traffic of influence and corruption. We call on the Commission to raise the profile of this situation and put conditions in place where Indigenous Peoples and others can utilize the radio spectrum,” said Temaj Morales.

In addition, in recent years, community radio stations have been the targets of police raids, criminal investigations, and unlawful imprisonment. “Under rule of law, it’s impossible to allow community radio broadcasting to be prosecuted. It is a contradiction,” said Xunic. “Official state propaganda in Central America continues to be used to either reward or punish media. The Commission and Special Rapporteur must make efforts to work with civil society to ensure greater plurality of voices to strengthen democracy in the region.”

The Commission members asked the panellists for more information regarding their opinion on adequate regulation and laws with regard to community radio broadcasting as well as more information on the abuse of criminal law against people who engage in community radio broadcasting. The Special Rapporteur on Freedom of Expression, Edison Lanza, stated that “the Commission firmly believes that diversity and pluralism are conditions and ends to democratic systems, and that in order for freedom of expression to wholly exist, States must assume their obligations and adopt legislation and effective public policies that enforce social inclusion.”