On the Screen MD 2017-3
21161
post-template-default,single,single-post,postid-21161,single-format-standard,theme-bridge,bridge-core-3.0.1,woocommerce-no-js,qodef-qi--no-touch,qi-addons-for-elementor-1.5.6,qode-page-transition-enabled,ajax_fade,page_not_loaded,,qode-title-hidden,columns-4,qode-child-theme-ver-1.0.0,qode-theme-ver-29.2,qode-theme-bridge,qode_header_in_grid,qode-wpml-enabled,wpb-js-composer js-comp-ver-6.10.0,vc_responsive,elementor-default,elementor-kit-41156

At the 63rd International Short Film Days (11-16 May 2017), the Ecumenical Jury appointed by INTERFILM and SIGNIS awarded its Prize of € 1500, donated by the Catholic Film Work and the Protestant Church of Oberhausen, to Seeds directed by Philippa Ndisi-Hermann (Kenya, 2016).

Motivation: Water gives and receives, surrounds and releases, reflecting life and love, memory and the future – the primal principle. The turtle carries its eggs from the sea to the land and withdraws back into the sea. The eggs are there together and yet each is alone. “Each egg a globe, each globe a world, each world a universe.” We live together, says the father. We live in each other, says the mother.

This wonderful work talks about the small things that are the seed and primary force of the whole, about the love of father and mother. This artistic treasure is poetic, gentle and metaphorical, a poem of words about child and mother, a poem of images about the sea, land and sand.

Its dialogues of voices with each other and words with images are outstanding; the photos make the audience pause and feel the stillness of the primary principle, the film sequences surround their own movement in the school of fish and the closeness of the family.

In addition, the jury awarded a Commendation to The Separate System directed by Katie Davies (Great Britain, 2017).

Motivation: Doing one’s duty, running errands, the system of military service, every day and office life and family must be managed. Soldiers take responsibility for others; when their relationships fail, however, they are left alone: the detained former soldiers are sentenced and locked away. They know for what but not why. Because their punishment therefore stands for society’s flight into perplexity, the latter severs all ties with the people in question.

This film gives a voice to these soldiers, talks about its impressive subject in rough recordings and harmonious, precisely filmed images. The hand-written notes that serve as breaks condense the detainees’ misery, work with the visual level to make their appeals of rage and loss directly to us, the community.

That meaning has become empty becomes emblematic at the end of this powerful and relevant work. Liverpool FC, their club, emerges as the great unifier of this community – but its familiar hymn, “You’ll never walk alone” which is thus implied reinforces the ambiguity of the former soldiers’ situation. Their lives are embedded in a close and separate system of society.

Furthermore, the Ecumenical Jury attributes a recommendation to the church film distribution companies Katholisches Filmwerk (kfw) and Matthias-Film to buy the non-commercial distribution rights of a film from the Competition for children and Youth Films. It is awarded to Gos leat don? (Where are you?) directed by Egil Pedersen, Norway, 2017.

Motivation: This film hits reality without big words, by combining images and music instead and operating between short film and music video. Its captivating sound design does not anticipate anything, but interacts, drives ahead, or at another time follows the images and the story in order to transcend reality. Aesthetics and “punch” of this short film music video ask questions beyond the generation limits and therefore stand out in the youth film competition as well as in the international.

It calls for being radical enough to create better root foundations: from what is preserved in ancient cultures such as the Sami from which the film originates, and from what is beyond the limited options of our self – in order to reach spirituality on the other side of the aesthetic-mystical.

At the 57th International Film Festival for Children and Youth Zlín (May 26 – June 3, 2017) the Ecumenical Jury, appointed by INTERFILM and SIGNIS, awarded its Prize to Half Ticket directed by Samit Kakkad (India, 2016).

Motivation: This film tells the story of two young brothers struggling to make a living in the Mumbai slum and still find beauty and joy in life without losing their dignity. The story seen through the eyes of the children unfolds as a fable with visual poignancy in beautifully shot scenes which are laden with metaphorical imagery and contemporary issues, an intriguing soundtrack and touching characters.

In addition, the jury awarded a Commendation to Railway Children (still below) directed by Prithvi Konanur (India, 2016). Motivation: The story of twelve years old Raju who escaped from home and tries to survive on the railroad tracks of Bangalore in the midst of violence, sexual abuse, corruption and drugs. Prithvi Konanur depicts Raju’s life in a realistic, uncompromising style but all the same hope lingers within the dreariness – because there are people who care and Raju knows how to stand up for himself. 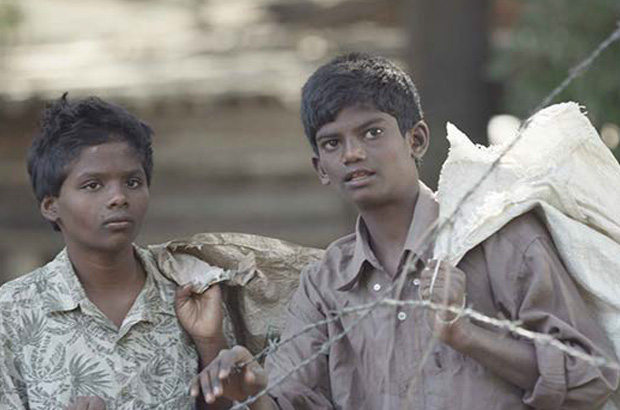 Motivation: With a gentle approach, the film portrays a journey towards acceptance and the pursuit of love. The unique bond formed between the characters strengthens a healing process that brings them a new life. It allows the viewer to connect to the most important of human values, something that overcomes all prejudices: love.

Summary: After the death of his lover, Thomas heads to Israel – the birthplace of the man he adored. Despite prejudice at his German origins he becomes the pastry chef at a local café owned by the widow of the deceased Oran. Yet she hardly suspects that the unnamed sorrow that connects her to the stranger is for one and the same man.