César Silva, reporter for UNE TV, has been attacked by armed forces and prevented from working. Silva is famous for breaking a huge story on a multi-million dollar theft of money from the social security by members of the current government. UNE TV is the last TV station to report from the perspective of the Alliance Against the Dictatorship and is facing daily difficulties including having their cable signal, internet and electricity cut off. The police behind César stopped him from approaching Congress, where he is authorised to work. Photo: Sean Hawkey

The following interview with Fr Ismael Moreno, Director of Radio Progreso, took place at the end of 2017. Radio Progreso is a Jesuit radio station based in Honduras, Central America.

The station is internationally recognized for its role advancing human rights, promoting peace, supporting community-based communication initiative, and advocating for environmental protection across Honduras. Radio Progreso has been broadcasting since the 1980s and has been involved in numerous community mobilization efforts in support of Indigenous people, Afro-descendants, peasants, women, and youth, both in Honduras and across Central America.

Honduras has been mired in a series of human rights and democratic governance crises since 2009, when then-president Manuel Zelaya was ousted in a widely denounced coup. High profile corruption cases, weakening institutions, and impunity followed.

The country is presently one of the most dangerous places in the world for journalists, human rights defenders, LGBTQ activists, and environmentalists.1 Latent discontent in the country erupted in late 2017 following a disputed and controversial presidential election that ultimately saw Juan Orlando Hernandez, the incumbent president, elected. The situation sparked mass demonstrations and violent state repression. 2 3 4

SH: How do you assess the current human rights situation in Honduras?

Fr Moreno: We need to have a firm understanding of what’s behind the current moment, [behind] this situation. There are systemic issues [to be addressed]. The institutions of this government do not guarantee human rights. The rule of law is subject to arbitrary decisions of a small group led by Juan Orlando Hernandez who have control over the three powers of the state (the executive, legislative, and judicial branches). [That means that the protection of] human rights depends on the will of the government team, and not on the institutional [and legal] order that should protect human rights.

What is the role of the media in the current crisis?

Fr Moreno: Media in Honduras are intimately linked to the groups who have power. In fact, power in Honduras is ultimately expressed through the capacity to control the media. The well-established national media in the country are associated with the five [most] powerful groups that exist in the country. Those are Grupo FICOHSA, Grupo Atlántida, Grupo Dinant, Grupo Terra and Grupo Karim. These groups bring together the 17 most powerful groups in Honduras, the 17 most powerful surnames in Honduras. 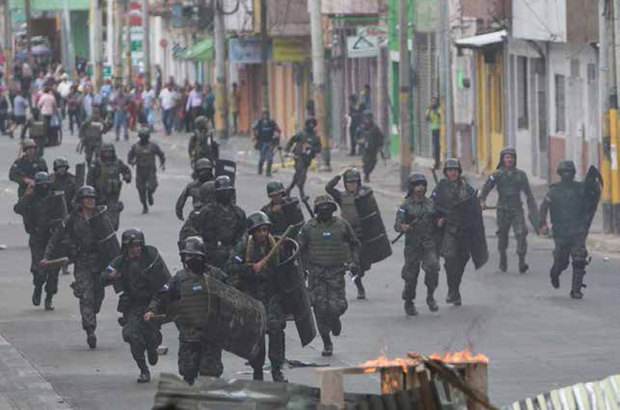 How do the media and the powerful groups behind them exercise this power?

Fr Moreno: The big media are the property of these sectors of power. So, for media that aren’t following the script- the ones that have relationships with human rights defenders and with the opposition, and that are [beyond] the control of the government and these five powerful groups- there is a five step process that is sharply adhered to.

The first step is to ignore them. For us [at Radio Progreso], who have a different point of view from the government’s, or who question the government, we’ll never be invited to a TV station to express our views. They’ll never run a story on who we are and what we do. We are ignored.

How has this affected Radio Progreso?

Fr Moreno: We’ve been ignored, but they can’t ignore us completely. They’ve tried to co-opt us and buy us off. Last year they tried to give me the government prize for human rights, I would have been part of their game if I’d accepted it. That hasn’t worked. They’ve tried to stigmatise us, they’ve produced posters [with supposed links to organised crime for example]. Attempts have been made to criminalise us. They have sabotaged our transmission tower in Tegucigalpa. And now we are trying to avoid that last step.

Text and revisions by Sean Hawkey and WACC staff

3. Reuters. 2018. “Honduran president sworn in amid protests after election chaos”.

4. Sandra Cuffe. 2018. “US-trained police are hunting down and arresting protesters amid post-election crisis in Honduras”. The Intercept.

Sean Hawkey worked in Latin America on post-war reconstruction and indigenous land rights where he used photography and video for political advocacy work. He edited a magazine in London for five years and ran communications for an alliance of aid agencies in Geneva for five years before going freelance. His photographs have been syndicated by newswires and widely published in newspapers and magazines, as well as being used by UN bodies and many non-government organisations. He has had solo exhibitions of his photography and wetplate images in the UK, Ireland, Spain, the Netherlands, Mexico, Colombia and France.