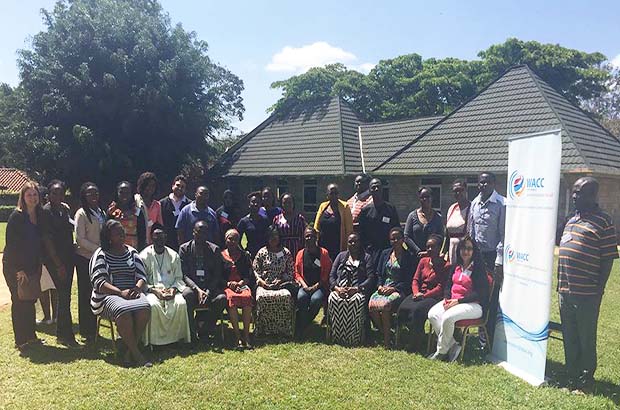 Thirty-five representatives of faith-based and secular civil society organizations from 18 countries participated in WACC’s Communication Rights School held in Nairobi, Kenya, 11-15 December 2017, in collaboration with the All Africa Conference of Churches (AACC).

Facilitated by WACC staff, the School’s aim was to build knowledge, skills and competencies on communication rights in the context of local realities.

It also aimed to strengthen a network of communicators able to bring audiences to understand, recognize and champion communication rights that address issues of privilege and exclusion, dominance and subordination.

Discussions focussed on questions of displacement, interfaith dialogue, peace and security, issues that are particularly critical for the African and Middle Eastern contexts.

The concept of critical communication rights in the African context includes principles of access, affordability, diversity of media outlets and content, plurality of images and voices, as well as information and knowledge sharing.

These themes vary according to the social, political, cultural, religious and economic advantages and disadvantages characteristic of the region.

Communications scholar Prof. Levi Obonyo’s lectured on policy frameworks underpinning communication rights. He emphasised the African Charter on Human and Peoples’ Rights which recognizes and guarantees enjoyment of rights without discrimination, equality before the law, and the right to be heard, to receive information, express opinion and disseminate opinion.

AACC’s Prof. Bosela Eale explored the role of communication in promoting peace, conflict resolution and interfaith dialogue. He discussed peace-building as a process that seeks to respond to the wider question of the wars and conflict across Africa.

Dr Lydia Mwaniki (AACC) discussed how gender is constructed in African traditional discourses through language, rites of passage from birth, to adulthood and marriage, and social cultural norms, which in turn, create unequal gender power relations and reinforce patriarchy.

Participants’ panel discussions exposed the convergences and differences in national and local communication rights’ landscapes of their respective countries.

In Nigeria, the costs of establishing radio and television are extremely high, while the cost of newsprint is shutting out newspapers. The licencing of community radio in 2015 improved access to media for groups such as students, religious organisations and universities.

In Kenya, the code of conduct for the practice of journalism is enshrined in law through the Media Act of 2007. The country has 161 broadcasters, 71 journalism schools, 87% of the population have access to mobile phones, and a Universal Access Fund to supported widespread access to ICT services, promote capacity building and innovation in ICT services.

At the same time, media practice in Northern Kenya is compounded by armed violence and attacks by the Al-Shabaab terror network.  Journalists embedded with security forces and writing stories supported by security agencies face threats from government and Al-Shabaab agents alike.

The research found that the women encounter unique forms of violence, from violence meted out by the male colleagues in the workplace, state-sponsored violence and internet-based hate speech, trolling and harassment.

The Foundation for Forgiveness and Reconciliation in Lebanon uses forgiveness education to prevent violence and restore communities. One in four residents is a refugee, with an estimated 1.5 million from Syria and 450,000 from Palestine.

The forgiveness approach to peacebuilding speaks to going beyond mutual dialogue to pursue complete reconciliation and full acceptance to embrace the ‘other’. Forgiveness is not forgetting, it is learning to remember differently.

The School was made possible by funding and in-kind contributions of Evangelisches Missionswerk (EMW), Council for World Mission (CWM) and the Otto per Mille Fund of the Waldensian Church in Italy.

Photo above: Participants at the Nairobi School on Communication Rights