See you at the movies?
34293
post-template-default,single,single-post,postid-34293,single-format-standard,theme-bridge,bridge-core-3.0.1,woocommerce-no-js,qodef-qi--no-touch,qi-addons-for-elementor-1.5.6,qode-page-transition-enabled,ajax_fade,page_not_loaded,,qode-title-hidden,columns-4,qode-child-theme-ver-1.0.0,qode-theme-ver-29.2,qode-theme-bridge,qode_header_in_grid,qode-wpml-enabled,wpb-js-composer js-comp-ver-6.10.0,vc_responsive,elementor-default,elementor-kit-41156 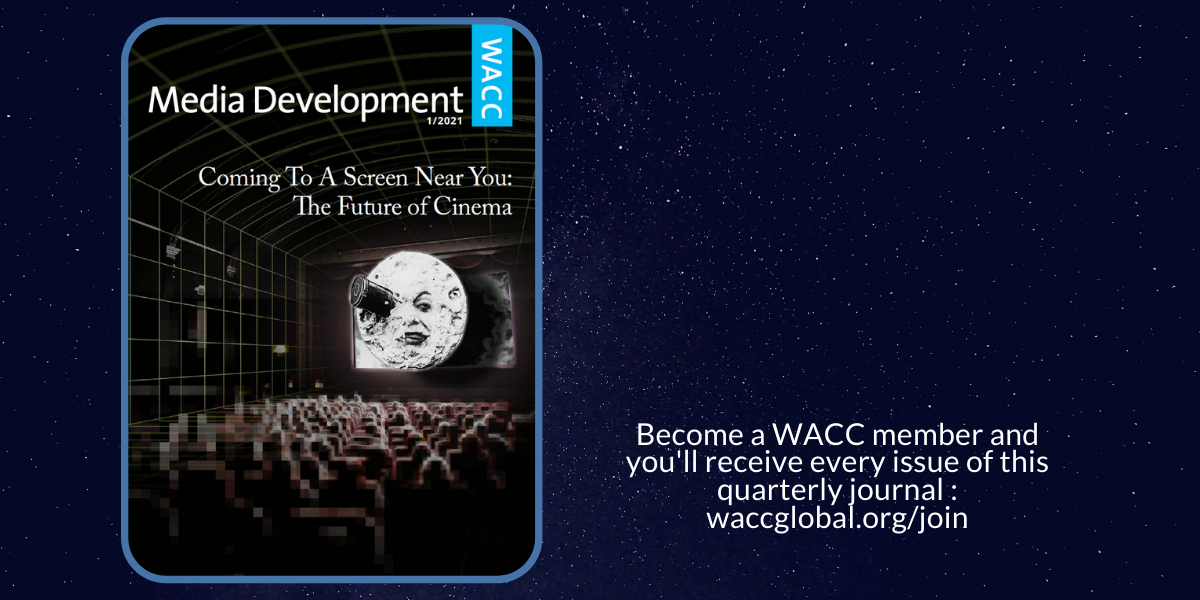 In the first issue of 2021, WACC’s Media Development magazine explores various aspects of cinema’s future, “recognising that people need art, drama, literature, music, and film in order to help make sense of the world and to find meaning.”

Even before the Covid-19 pandemic, which temporarily shuttered movie theatres worldwide, the entertainment industry was already struggling, notes editor and WACC General Secretary Philip Lee. There were “growing concerns about the encroaching influence of internet-distributed content, or what media studies scholar Amanda Lotz calls “Portals” (e.g., Netflix, Hulu, HBO, Amazon Prime Video, Disney Plus, etc.),” and whether it meant the beginning of a “post-TV” or “post-network” era.

In “Streaming stress; pandemic panic”, Heidi Ippolito argues that despite the popularity of these “portals,” she believes that “people will still want to go to the movies.” Watching Netflix just doesn’t cut it, she states, it’s too individualistic, whereas watching movies in a dark theatre is a communal experience. “Even those who can afford surround sound and giant flat screen TVs, nothing can quite replicate the sensations generated by a room full of eager watchers: the urgency of arriving on time, the smell of someone else’s snacks, the anticipation when the trailers or commercials end, and the booming laughter that erupts from everyone in the room simultaneously.”

In “What’s to come in faith and film”, John P. Ferré predicts that movies about faith and spirituality will find a more secure home in streaming services, rather than on the large cinemas. While “risk averse” producers will continue making formulaic films, he believes that there will be “innovators” who will take advantage of the changes in the way films are produced, distributed and consumed, and produce movies about faith “that intrigue viewers by questioning assumptions and challenging prevailing viewpoints.” He adds: “Many will be directed by women, some will be documentaries, and all of them will be distributed online.”

In this issue, Peter Malone looks back over the 2010s and chooses 10 significant aspects of popular cinema, citing for instance that “as the century ended, there was stronger [Black] presence in front of and behind the camera,” and race has become a more prominent issue not just in Hollywood, but also in the UK, France, and Australia. He adds that the most prolific black film industry, Nigeria’s Nollywood, are getting a lot of exposure in streaming services such as Netflix.