Posted at 11:34h in One Year Projects by wacc_kn 0 Comments 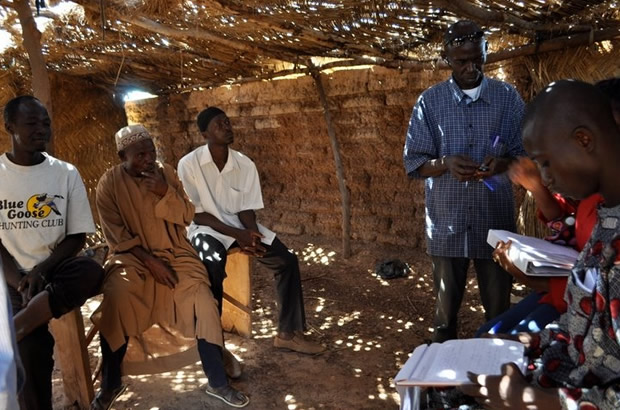 In Tanzania, farmers’ stories, especially on climate change adaptation practices, are rarely heard in the media. The project sought to strengthen farmers’ voices in the media, to value and increasingly feature farmers’ stories on adaptation to climate change impacts and food security. It was implemented by Tanzania Farm Radio Initiative (TAFRI), an organization that promotes effective use of radio-based and ICT enhanced communication that impacts farmers.

Assessment: All intended project outcomes were achieved. 5 journalists (2 women, 3 men) received training and hands-on experience in visits with 98 farmers from 20 villages. Each journalist worked with a maximum of four villages of agropastoralist farming communities. An estimated population of 74,083 people (36,477 men and 37,606 women) benefitted indirectly. The journalists gained skills on finding and writing farmers stories particularly on climate change. They also learnt about climate change and its effects on small scale farmers, different strategies for adaptation to climate change effects and how journalists could support farmers grappling with drought. 20 stories were produced and broadcasted/published on 4 radio stations and 1 newspaper. A network of journalists, extension staffs, local government and the Selian Agricultural Research Institute was established. Journalists joined Farm Radio Weekly to access stories and share with farmers and other journalists. They created a mail group between themselves and joined Barza – a journalists network from different parts of the world. Each of the trained journalists developed a plan committing themselves to visit farmers in their villages bi-monthly to produce and broadcast their stories. Radio listening by women has improved as evidenced by informal research to determine changes in listening patterns pre- and post- project implementation. This may be due to the fact that radio agricultural programs that aired previously involved only agricultural professionals to educate farmers who felt most topics were not relevant. The programming chosen by the project was observed to be more interesting and attractive to farmers because they were part of it and happy to hear themselves and other farmers voice their needs. Three villages established a committee of 8 farmers (2 women and six men) to follow up with the Arumeru district council for technical support on drilling bore holes and water harvesting. A challenge posed was the airing of broadcasts at times that were not convenient to most farmers, and in the early evening hours when women are occupied with domestic chores. Print publishing was not effective given that newspapers are inaccessible for most farmers who subsist on low incomes. The most important change engendered by the project was new capacity in 5 journalists to report effectively on climate change for a farming audience, and to incorporate farmers’ voices. For the first time women are represented in a local committee (2 women out of 8 members) in a community where women are characteristically marginalized from leadership positions.