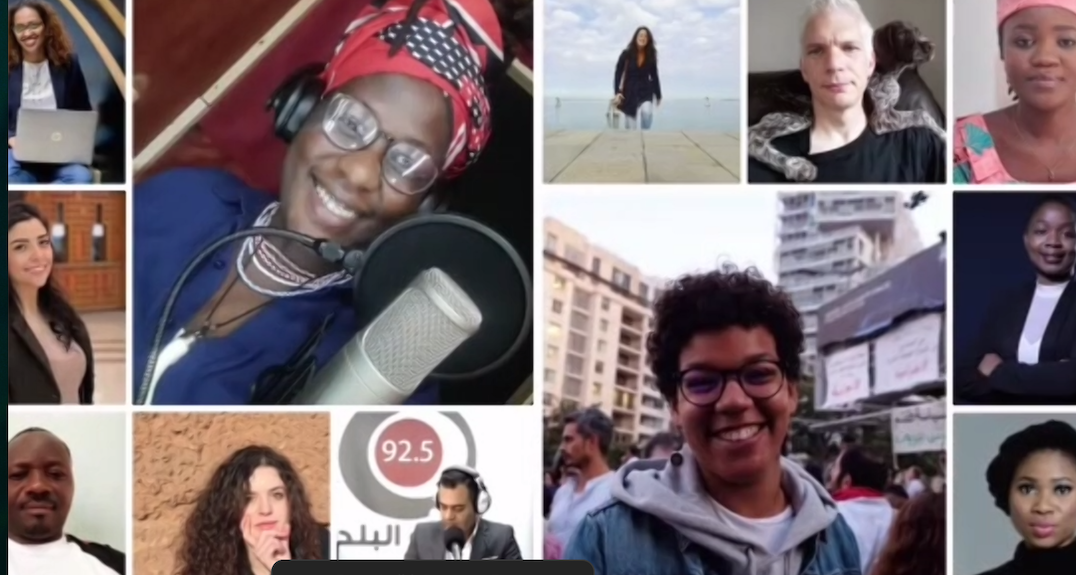 A podcast series focused on migrant women workers in Lebanon having a conversation among themselves about their hopes and experiences, a multi-media package of stories on refugees pursuing higher education through a scholarship program in Italy, and audio interviews with enterprising women refugees in Cameroon were but a few of the creative outputs shared June 9 by participants of Changing the Narrative: Cross-regional training programme on media coverage of refugees and migrants, a five-month program launched in January by three WACC regional associations.

In an online event, WACC Europe, WACC Middle East and WACC Africa celebrated the achievements of nine journalists and communicators who successfully participated in the pioneering initiative aimed at helping news media cover refugee and migration issues “ethically and accurately,” and giving communication platforms to refugees and migrants so that they can speak on their own behalf. 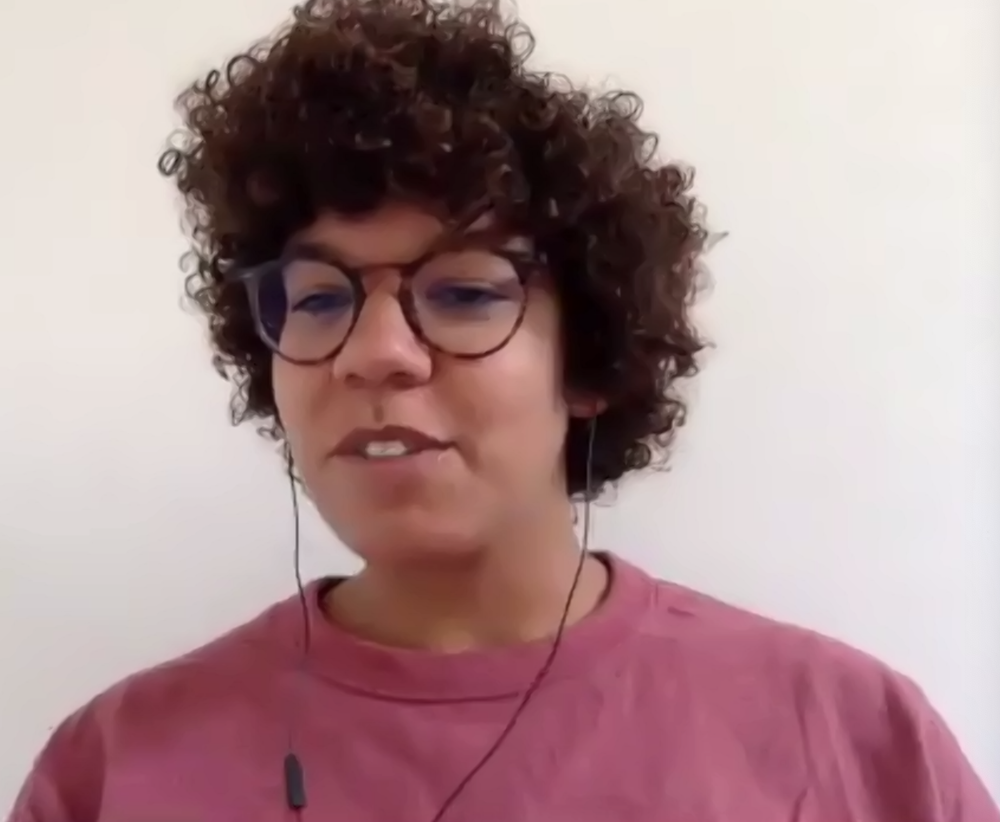 Anamê Gnanguenon, a former journalist who works with migrant domestic workers for advocacy campaigns, produced the podcast series “Women of the Blame (Femmes Coupables).”  The teaser to the podcast grabs listeners’ attention with its lively beat and the compelling voices of migrant women workers: “Hi, everyone, I’m Noeme from Kenya and I’ve been here in Lebanon for seven years now and I’m glad to be here. Hi, everyone, my name is Mariam and I’m from Sierra Leone and I’ve been here for eight years now and I’m very happy to be part of this program. Hi, everyone, my name is Miriam and I’m from the Philippines. I’ve been here now for 29 years in Lebanon and I’m a Filipina.”

Every episode of “Women of the Blame” features between three to five women migrants from different countries who share their dreams and the realities they confront upon arriving in Lebanon. “It’s a topic we never hear about, the reason why people decide to migrate,” she said. Other episodes discuss their experiences with recruitment agencies in their home countries, with racism and discrimination, with mental health and coping mechanisms, on motherhood, and with returning home. The series is broadcast in French, English, and Amharic. 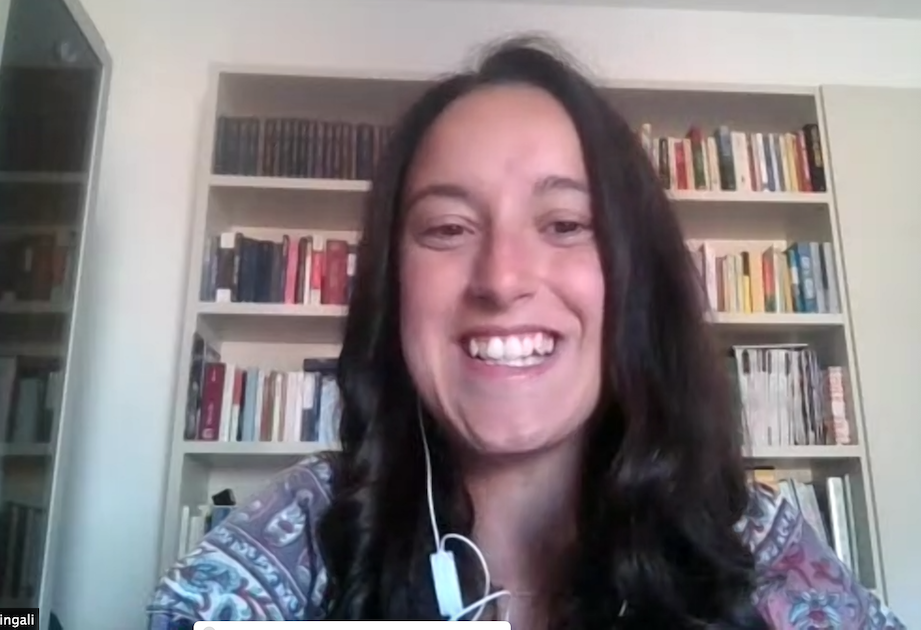 Giulia Tringali, a freelance journalist from Italy, said her multi-media project, which focused on the university corridor initiative for refugees, opened her eyes to the remarkable achievements of people who study in refugee camps and pursue higher education in Italy through scholarships provided by University Corridors for Refugees, a project of Italian universities which receive support from institutions such as the UNHCR, the Italian Ministry of Foreign Affairs and International Cooperation, Diaconia Valdese and Caritas Italiana.

Rekiatu Musa Jingi, who has over eight years of experience as investigative journalist and human rights advocate in Cameroon, explained that she wanted her project to shed light on the resilience and enterprise of women refugees who have been working hard to provide for their families’ needs rather than relying on their husbands or on help from relief agencies. Some of the women refugees she has interviewed include a cattle breeder, a midwife, a farmer, a fashion designer, and an entrepreneur who makes reusable sanitary pads. 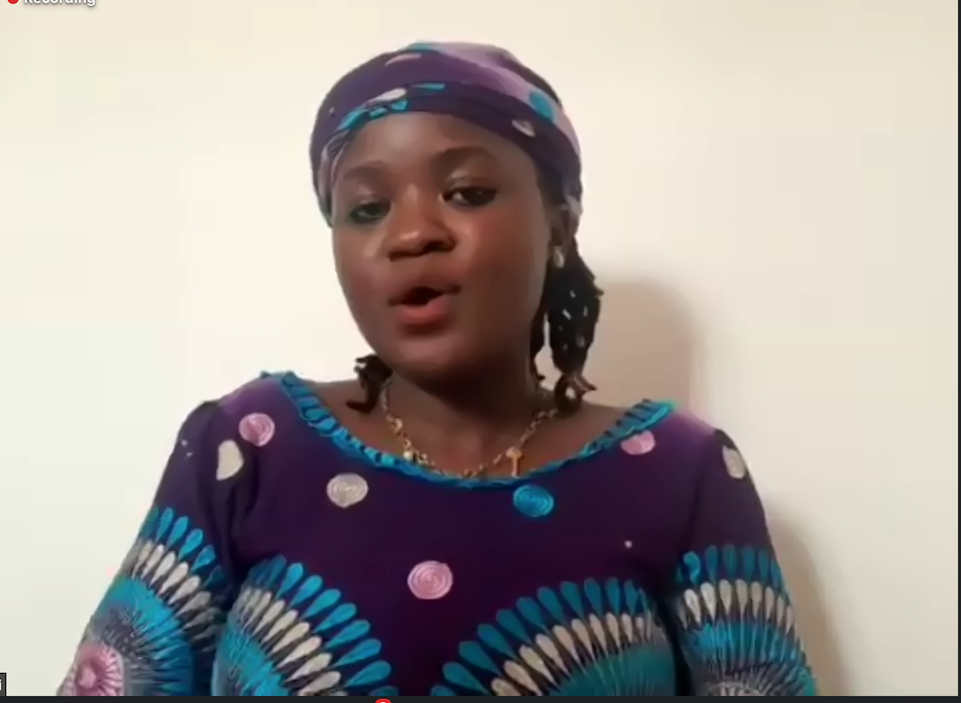 Jingi said she learned a lot from the program, including “how to get good sounds, how to conduct great interviews and how to take good pictures and videos without victimizing anybody.” She said she learned that “words matter and we should examine the terminology we use to respect the dignity of migrants and avoid using demonising language, to ensure balance in our coverage and avoid victimization or oversimplification of issues.”

‘An issue of communication rights’
In his opening remarks, WACC General Secretary Philip Lee explained the importance of changing the narrative in stories about migration and other issues. “First, it’s an issue of communication rights — all those rights that enable people to express their identities and needs, of freedom of expression and opinion, the right to information, language rights, etc. Denying these rights is a form of silencing or censorship,” said Lee. “In terms of the news media, such denial can only be tackled by better codes of practice, ethical and accurate reporting, more balanced and nuanced representations, and today with social media often carrying fake news, efforts are also needed to combat overt discrimination and hate speech.”

WACC is also concerned about fairer representation in other media, he said, citing studies that show that “audiences substitute stereotypes they see on screen for reality, especially when they have not had direct interaction with ethnic groups.” Media in general “have the power to shape attitudes and behaviour, more authentic representations can help break down barriers, open minds to new ideas, and even be a source of inspiration,” said Lee. He cited the Global Media Monitoring Project (GMMP), WACC’s flagship initiative, which studies gender representation in the news, and explained that WACC is involved in this work “because it believes that what we see here and read about women affects individual and collective attitudes and actions… and misogyny and bias can in part be challenged and changed by changing the narrative.” This can also be applied to media representation of migrants, refugees, and internally displaced people, he said. “Changing that narrative is crucial to understanding the real world we live in and to restoring the communication rights of people everywhere.”

The event also featured responses from experts in conflict journalism, global migration, and EU policy and legislation — Judith Raupp, journalist and trainer from the Democratic Republic of Congo, Dr Torsten Moritz, general secretary of the Churches’ Commission for Migrants in Europe, the Rev Dr Seforosa Carroll, program executive for Mission and Mission from the Margins, World Council of Churches, and Lekan Otufodunrin a journalist and media career development specialist based in Lagos and Secretary of the WACC Africa Region.

Otufodunrin said the podcast series that featured women migrants and refugees “who ordinarily would not have been given voices in the traditional media able to speak up…is very important,” and was a manifestation of communication rights. 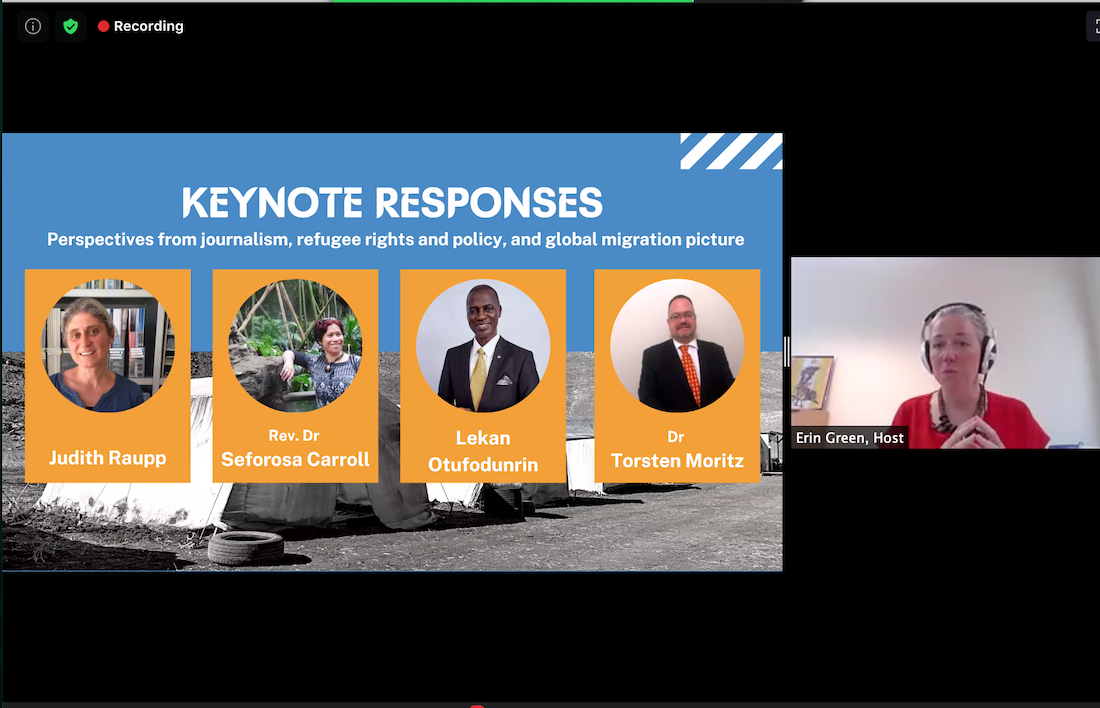 ‘You’ve lifted their dignity’
Raupp offered a critique of the project presentations and urged participants to continue the work of promoting it on mainstream media.

Carroll congratulated the participants saying that their projects have amplified the voices of people in the margins of society. “You’ve done it in an incredible way, you’ve also lifted their dignity, which is what I really appreciated. You’ve allowed a space and a platform to enable their voices to be there… It’s amplifying, it’s also allowing them to speak for themselves.”

She noted how the projects focused on gender. “When we talk about migration, we can often forget the gendered nation and nature of migration and that women and children usually feel the process of migration maybe differently from say their male counterparts,” she said.

Carroll also wondered whether using the term “migrant” needed to be reconsidered, noting that there are different kinds of migration and that the International Organization of Migration (IOM) itself has stated that of 281 million migrants, only 84 million people are classified as refugees or internally displaced persons.

Moritz, for his part, said he was impressed with the projects produced by the participants, even as he offered some advice on providing more context to some of the stories. He also responded to Carroll’s remark about using the term “migrant” and said that while he acknowledged the complexity of the issue, it’s a term that is widely used in international instruments. “We can’t do away with the term, but we need to unfold all the realities which are behind it,” he said.

Stephen Brown, WACC Europe President and WACC Treasurer, thanked the program participants saying, “It was just great to see what you’ve achieved. Thank you for your commitment, your skills, your openness, your eagerness to learn…” He praised their work saying, “it has inspired us,” and expressed the hope that more news reporting would approach stories from a communication rights perspective.

The other journalists and communicators who participated in the program also included:
· Santos Madhieu, a refugee from South Sudan currently in Kakuma Refugee camp, Kenya, who currently works as a news editor and anchor for Refugee FMM Kakuma and Kalobeyei Community Radio.
· Amina Deka Asma, a multi-media journalist working as a podcast producer for Volume, a podcasting company.
· Teresa Di Mauro, an Italian freelance journalist who focuses on Caucasus affairs, migration, minorities and conflicts.
· Seblewongel Tariku, a freelance journalist in Finland who specializes in issues around migration and conflicts in sub-Saharan Africa.
· Johnny Fisher supports Amplifying Voices’ partners using community-centred media “to get people talking, listening and taking action together.”
* Killian Ngala, an award-winning Cameroonian journalist with nearly 20 years of experience in journalism. After working with state broadcaster CRTV, he joined the BBC for a 36-month stint before becoming a freelance journalist.