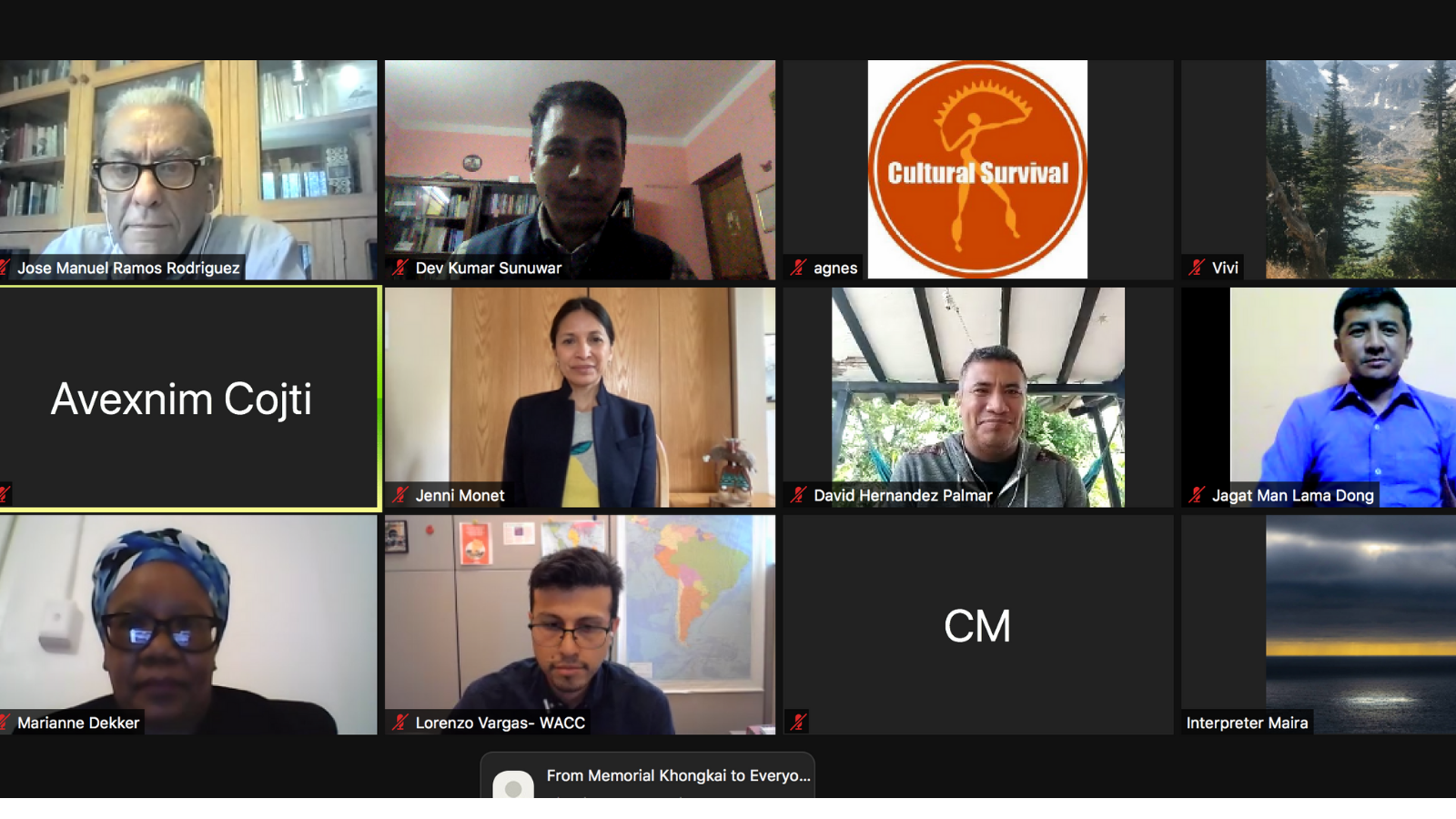 Indigenous media practitioners on April 29 underscored the need to galvanize a movement that would ensure that Indigenous peoples worldwide can exercise their right to “establish their own media and have access to all forms of non-Indigenous media without discrimination” as stated in Article 16 of the UN Declaration on the Rights of Indigenous Peoples (UNDRIP).

Indigenous media representatives from South Africa, the United States, Nepal, and Venezuela spoke at an online forum organized by the Indigenous Media Caucus, Cultural Survival and WACC as a side event during the 20th Session of the Permanent Forum on Indigenous Issues. The forum also discussed the results of “Are Indigenous voices being heard?” — a global study commissioned by these organizations, which looked at the state of Indigenous broadcasting around the world.

Marianne Dekker, a media practitioner and descendant of South Africa’s Khoi and San people, lamented how her country’s Indigenous Peoples are invisible in mainstream media and how they are often treated with condescension. “We are far behind in the implementation of UNDRIP,” she said.  The voices of South Africa’s Indigenous community members are not heard, and their views are often regarded as “not sophisticated enough” to be put forward, said Dekker. They are treated “as if they are less human,” and their causes are deemed not important.

Dekker said this could be due to a lack of information and knowledge about the history of Indigenous Peoples. Too often, mainstream media rely on press releases from government and do not bother to conduct their own research and reach out to Indigenous communities when reporting on stories that affect them, she said. “There’s a need for Indigenous Peoples’ voices to be heard. They should be part of mainstream media, just as respected and accepted,” she said, adding that they are yearning to have all aspects of their culture recognized and preserved.

In the United States, award-winning Indigenous journalist Jenni Monet described Indigenous radio as “a bright spot” in the American media landscape. About 60 Indigenous radio stations are organized by the Native Public Media, which works directly with the Corporation for Public Broadcasting, a non-profit corporation funded by the American taxpayer, while another 40 or so operate independently, she said.  In addition, there is a live call-in program, Native America Calling, that links public, community and tribal radio stations, the Internet and listeners in discussions about issues specific to Native communities. It acts as a “microphone” for the network of Indigenous communities on issues such as current events and is “a gauge for where viewpoints are on issues such as sovereignty, human rights, decolonized thinking,” she said.

Still, the invisibility of Native Americans in mainstream media and public consciousness is “so extreme and so high,” said Monet. She referenced Dekker’s view, saying “the condescension when addressing Indigenous Peoples is very real.” Just recently a conservative pundit with a paid analyst position at CNN spoke at a conference and made the case that the US nation was “birthed from nothing,” she said, noting that “it’s a complete erasure of Indigenous Peoples.” She also cited that native people comprise less than one-half of one per cent of staff journalists in US newsrooms.

David Hernández Palmar, a Wayuu filmmaker, producer, journalist and curator from Venezuela stressed the importance of funding Indigenous radio. “We need sustainability, not just a license,” he said, noting that most Indigenous radio stations in Latin and South America cannot sustain themselves because they’re not allowed to accept advertising. Some Indigenous Peoples who have set up their own radio without a license are also criminalized, he said.

Against all odds, however, Indigenous Peoples have used digital technology to their advantage, he said, citing how some are using WhatsApp to send short videos and podcasts.

WACC’s Communication for Social Change manager Lorenzo Vargas emphasized the need to democratize media in order to advance Indigenous Rights. The two “are absolutely tied, in the same way that we say Indigenous Peoples should be in control of their own resources, they must be in control of their own media and narratives.” Indigenous Peoples need to have platforms and structures where their voices are heard, he said.

Jose Manuel Ramos Rodriguez, researcher of “Are Indigenous voices being heard?” and lecturer at Mexico’s Ibero-American University, highlighted the need to work on the legal recognition of Indigenous radio, to advance their autonomy from a financial and technological aspect, and to view Indigenous broadcasting as empowering and contributing to self-determination and sovereignty at all levels.